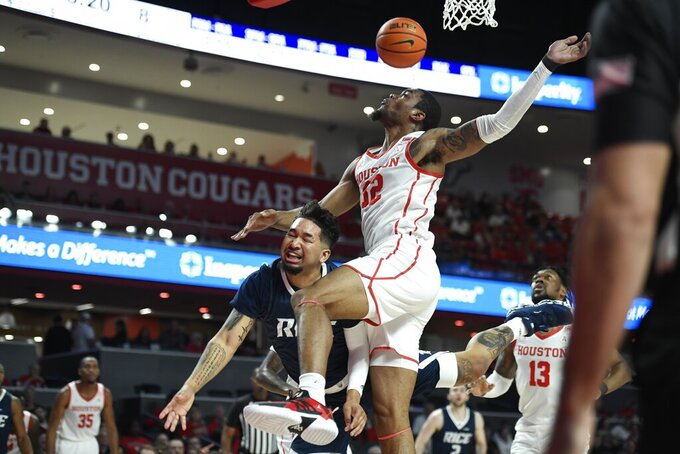 “Marcus, Taze (Moore) and Kyler, the more they play together, the better they will get,” Houston coach Kelvin Sampson said. “It’s just our second game. We’re going to get better as we go, and we’re going to need to. We had a good game tonight, obviously. Guarding Rice’s actions, we knew what to do there, but that’s a credit to our staff.”

Houston forced Rice (1-1) into 20 turnovers, which the Cougars turned into 34 points. The Cougars shot 41% and were 10 of 30 on 3-pointers in extending their home winning streak to 27 games.

“You saw our culture come into play tonight,” Sampson said. “How hard we play, our defense, our toughness, our rebounding.”

Travis Evee scored 11 points and Cameron Sheffield had 10 points to lead Rice. The Owls struggled from the field in the first half, shooting 5 of 25, including 3 of 17 on 3-pointers. Rice shot 28% and made 8 of 31 3-pointers overall.

“They were well-prepared, ready to play,” Rice coach Scott Pera said. “They got us early. We couldn’t dig out of the hole. Against good teams on the road, that’s hard to do. I thought they shot it well. They did what they do defensively. They really pushed us out high on the floor, made our catches high and shots really quick.

“I thought that would be the game plan, and I thought we would have handled it better, having some veteran guards. They didn’t handle it like I had hoped, obviously, and things got away from us, and then it got ugly.”

Rice: The Owls have lost 25 straight games against ranked opponents and fell to 2-50 on the road against foes in the AP Top 25. Rice, which was picked to finish eighth in Conference USA, was overmatched, especially inside.

“They pretty much did what they wanted to do all night,” Pera said. “We didn’t have much resistance. We didn’t have much attack on offense to get what we wanted. When things snowball like that against a good team … we couldn’t handle the punches early and the knockout was early.”

Houston: The Cougars took care of the ball, committing seven turnovers, and held a 32-12 advantage in points in the paint. Houston had a 42-39 rebounding edge, including 16 offensive rebounds, and finished with six blocks and 13 steals.

“We work on guarding actions,” Sampson said. “We just executed the game plan flawlessly. We frustrated them. They couldn’t get into the paint with the dribble.”

Houston improved to 65-18 in the series with the crosstown Owls and has won the last seven.

Sampson moved past Gary Williams into 37th place in NCAA history with 668 victories.

Houston: Hosts No. 25 Virginia on Tuesday.