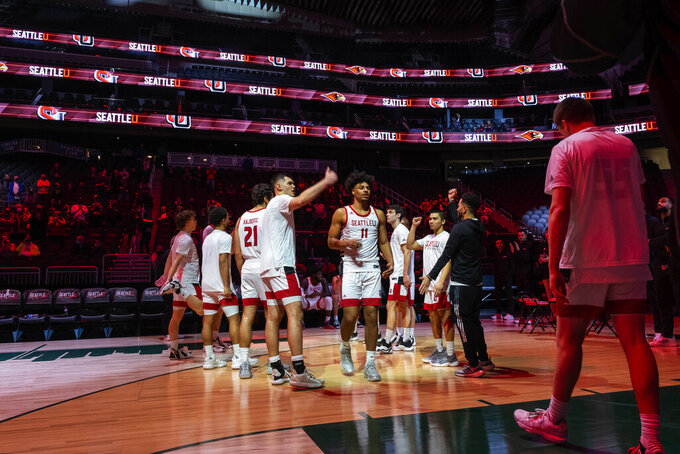 Seattle University players are introduced on Jan. 26, 2022, before an NCAA college basketball game against Stephen F. Austin at Climate Pledge Arena in Seattle. Seattle won the game and went on to join New Mexico State and Stephen F. Austin in March at the end of the season for a three-way tie to share the regular-season Western Athletic Conference championship. More than 50 years since its last NCAA tournament appearance, Seattle now needs just two more wins in the WAC tournament in Las Vegas to once again reach the biggest stage of college basketball. (Dean Rutz/The Seattle Times via AP)

SEATTLE (AP) — When Seattle University decided 15 years ago to bring its athletic programs back to Division I, it hoped to recapture a piece of its history.

A reminder of that past success hangs inside the Redhawks’ cozy 1,000-seat gymnasium, a black-and-white photo of its most famous basketball alum, Elgin Baylor.

Nearly 65 years after Seattle was led by Baylor and played for a national championship, and more than 50 years since its last NCAA Tournament appearance, the Redhawks need just two more wins to once again reach the college game's biggest stage.

“This team has earned the right to be that close, so we don’t need to hide from it,” first-year Seattle coach Chris Victor said. “We’re proud of it. We’re excited. We won a WAC championship. That was goal number one. Goal number two was to go to the tournament.”

Seattle will be the No. 2 seed for this week’s Western Athletic Conference tournament in Las Vegas after claiming a share of the WAC regular-season title along with New Mexico State and Stephen F. Austin. The coveted top-two seed gave Seattle a bye to the semifinals.

It was the first time Seattle claimed a conference title as a Division I school — its only other regular-season title came as a Division II school in 2007. Seattle finished the regular season with 23 wins, a mark that was last achieved by Baylor’s team in 1957-58, the same season it lost to Kentucky in the national championship game.

It was a special regular season for the Redhawks that was nearly derailed before it even started.

“We’re going to have a mark on this thing forever,” said Seattle guard Darrion Trammell, a first-team all-WAC selection.

Seattle’s season began with a coaching shakeup. Former coach Jim Hayford resigned in November after being put on leave following accusations that he used a racial slur during a scrimmage. Victor was installed as the interim coach and tasked with keeping the foundation from crumbling under a team the Redhawks believed could be special.

Victor did his job and had the interim tag dropped. He was also named the WAC coach of the year.

“Every pregame board has the word ‘united’ across the top. And this team’s biggest strength has been their relationships with each other, and they’ve gotten closer and closer,” Victor said. “As the season progressed, whether we’ve won games, lost games, they continued to grow closer, and that’s been our biggest strength.”

The Redhawks dropped from Division I to NAIA in 1980, leaving behind a history that included 11 NCAA appearances, although none since 1969. Having a chance of again playing in the NCAAs was part of the dream when the school moved back to Division I beginning in 2008.

The reality of trying to recapture that history has proven more daunting than the Redhawks likely expected. Seattle played three seasons as an independent before landing a spot in the WAC. Before this season, the only other time the Redhawks reached the 20-win mark was in 2017-18.

And when it came to that chance of playing in the NCAAs, Seattle has only once reached the WAC title game, losing to New Mexico State in 2015.

Guard Cameron Tyson knows what its feels like to play in the NCAAs. He did so a season ago as a backup at Houston before transferring back to his hometown to play for the Redhawks.

“That experience really helped me grow as a person. It helped me realize what that stage is like and made me hungrier to get back there,” Tyson said. “That’s my ultimate goal is get back to the NCAA Tournament.”

New Mexico State also received a bye to the semifinals as the top seed for the WAC tournament. While Seattle can’t potentially see the Aggies — who swept both games in the regular season — until the final, the Redhawks do have streaking Stephen F. Austin as a potential semifinal matchup. Stephen F. Austin closed the regular season with 10 straight wins.

“Some teams got to go out in Vegas and win five (games). We’ve got to win two,” Victor said. “So we’ll prepare, we’ll see what it looks like and we’ll take a swing out there.”