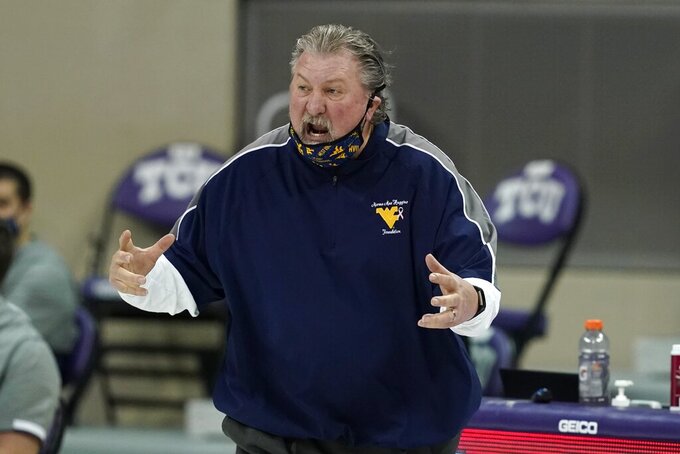 West Virginia head coach Bob Huggins shouts at an official during the second half of an NCAA college basketball game against TCU in Fort Worth, Texas, Tuesday, Feb. 23, 2021. (AP Photo/Tony Gutierrez) 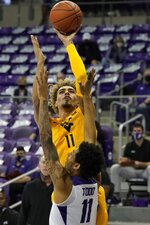 FORT WORTH, Texas (AP) — Taz Sherman scored 23 points, Derek Culver had 18 points and 14 rebounds, and No. 10 West Virginia continued its solid play on the road with a 74-66 victory over TCU on Tuesday night.

West Virginia's three-game Texas road trip this week was cut short when the Big 12 announced earlier Tuesday that Thursday's game between the Mountaineers and No. 2 Baylor was canceled. West Virginia now will return home to finish the regular season in its own arena with four games over eight days.

The Mountaineers overcame a 19-point deficit to beat No. 14 Texas on Saturday before traveling by bus to Fort Worth for an extended stay prior to playing TCU.

West Virginia led nearly the entire game against the Horned Frogs thanks to Culver, who scored 15 first-half points on 6 of 8 shooting.

But Culver, who had his 11th double-double of the season, was held without a field goal in the second half and West Virginia had to turn to other shooters.

TCU went five minutes without a field goal spanning both halves and saw a two-point deficit balloon to 13.

After Nembhard hit two jumpers and a pair of free throws to give TCU life, Sherman responded with 14 points in a four-minute span. Sherman sank a 3-pointer, was fouled and made the free throw to give the Mountaineers their largest lead, 62-46, with 11:16 remaining.

Although West Virginia went without a field goal over a five-minute stretch late in the game, TCU got no closer than eight points.

West Virginia: The Mountaineers have won six straight on the road and five of its last six overall.

TCU plays at Iowa State on Saturday for the start of three straight road games.