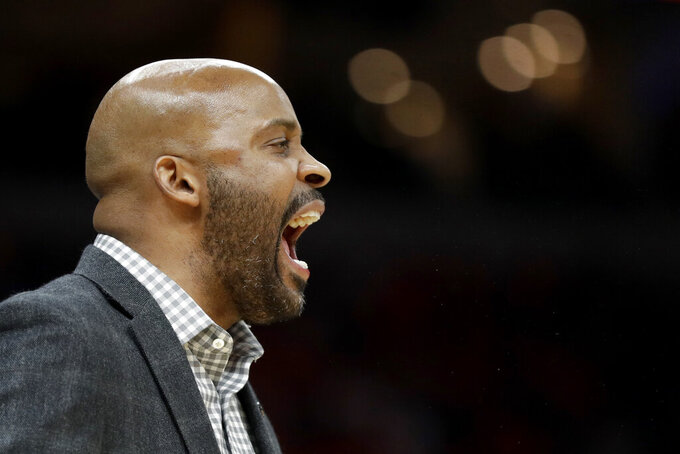 Missouri head coach Cuonzo Martin yells from the sidelines during the first half of an NCAA college basketball game against the Illinois Saturday, Dec. 21, 2019, in St. Louis. (AP Photo/Jeff Roberson) 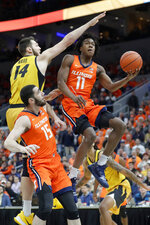 Pinson and his teammates had the last laugh.

Pinson also scored a career-high 14 points for the Tigers, who won their third straight game.

“I was just trying to get the win. I heard what he said. As a player I can’t say nothing so I was just worried about the win and making sure that we won so after the game I could say something if I saw him,” joked Pinson, who gave a little wave to that Illini fan in the final seconds with the game in hand. “For the most part I really don’t pay attention to it. I just laugh it off.”

Ayo Dosunmu scored 21 and Kofi Cockburn added 13 for Illinois, which had its two-game winning streak snapped.

The Tigers dominated with a stifling defense. Illinois shot just 18 for 50 (36%) and had three separate stretches of at least three minutes without scoring a point.

The Fighting Illini entered the game No. 1 in the country in rebounding differential, but were outrebounded by Missouri 36-32.

“We have good defensive numbers, but I think we could have truly elite numbers if we truly took pride on playing defense and not so much playing because that’s what coach requires, but understanding when you defend at an elite level, you have a chance to beat anybody,” Tigers coach Cuonzo Martin said.

Missouri outscored Illinois 17-5 in an eight-minute span from the end of the first half into the second.

Missouri scored eight of the last 10 points of the first half with Smith scoring all of the points during the spurt to give the Tigers a 26-23 halftime lead.

Smith started a 9-3 run to begin the second half with a bucket and finished it with a dish to Pinson for a 3-pointer from the corner to extend Missouri’s lead to 35-26.

An 8-0 sprint pushed the Tigers’ lead to double-digits. Pinson scored the first four points, and a Pickett put-back gave Missouri a 47-33 edge with 10:56 left.

“We came in here wanting to be the physical team,” Pickett said. “We wanted to go out there and be aggressive and guard the whole game. … We just wanted to be the tougher team.”

Illinois was able to cut the deficit to five with a Dosunmu bucket with a minute left, but Pinson and Smith quelled the rally with free throws for the Tigers.

Thanks to Pickett and Pinson, the Tigers’ bench outscored the Illinois reserves 31-10.

“We talked about extensively in practice — Javon Pickett,” Illinois coach Brad Underwood said. “We’ve got a man sitting out who does a great job of emulating him, and he wore us out for two days in practice, just doing Javon Pickett stuff.”

Illinois hit on 5 of its first 7 field goal attempts to start the game. Dosunmu hit a couple of jumpers and Giorgi Bezhanishvili drained a 3-pointer from the top of the key to give the Fighting Illini an 11-5 lead.

Missouri started the game shooting just 3 of 13, but Pickett got the Tigers going with a pair of treys.

The Tigers defense forced two prolonged Fighting Illini scoring droughts in the first half, one of over three minutes and the other over four minutes.

Illinois maintained its lead for much of the half with Dosunmo’s 11 points, including shooting 5 of 7.

Missouri big man Jeremiah Tilmon sat most of the first half with two fouls and fouled out with 4:29 left in the game. But despite not having the 6-foot-10 forward’s presence, the Tigers still outrebounded Illinois — which entered the game as one of the nation’s top rebounding teams — 36-32.

“I always say to our guys you have to play with boxing gloves on, then we’ll start playing basketball,” Martin said. “I don’t say that like we’re fighting. They understand what I mean. It has to be a physical game, do it without fouling. You have to set a tone of toughness before you step on to the floor because I think if you walk on the floor casual the result will be like Charleston.”

Illinois: Despite dropping their second-straight to the Tigers, the Fighting Illini still leads the Braggin’ Rights series 25-14.

Missouri: After starting the month with the worst loss in recent memory to Charleston Southern on Dec. 3, the Tigers finished the month on a high by winning their second-straight Braggin’ Rights game, propelling them into SEC play.

“He needs to figure out how to make all the other opponents they play wear Illinois jerseys,” Underwood said of Martin. “Because that’s a team that played as well as they’ve played all year.”