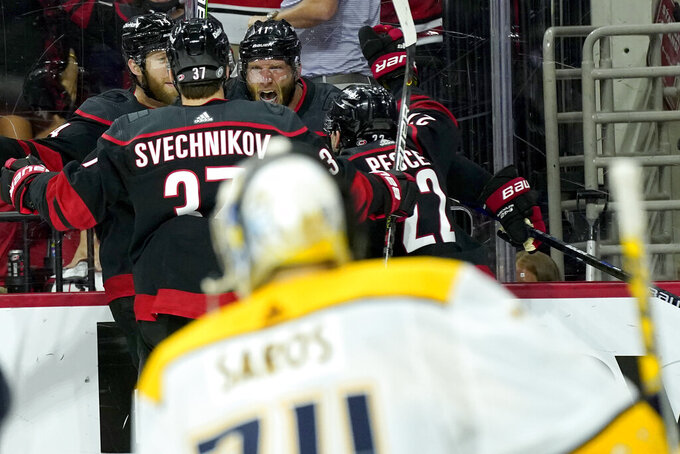 RALEIGH, N.C. (AP) — Coach Rod Brind'Amour figured the puck would eventually have to bounce the right way for his Carolina Hurricanes.

Fittingly, his captain was ready when it did.

Jordan Staal scored off a rebound at 2:03 of overtime to give the Hurricanes a 3-2 come-from-behind victory over the Nashville Predators on Tuesday night, pushing Carolina to a 3-2 lead in the first-round playoff series.

Staal was jostling for position just outside the crease when Brett Pesce fired a shot toward Juuse Saros, who made the stop and poked the puck forward. But Staal batted it out of the air and past Saros into the net.

Staal gave a yell and immediately skated backward with his arms outstretched until he reached the boards, where his teammates mobbed him in front of a roaring home crowd of 12,000.

“Not a whole lot of thoughts going through my mind besides just wanting some bear hugs from the fellas,” Staal said.

Staal's score ended what was the third straight game to go to extra time, with the Predators winning a pair of grueling double-overtime contests in Games 3 and 4 in the best-of-seven series. This one, however, moved the Hurricanes within a win of closing it out and advancing in the postseason.

They’ll get that chance on the road in Game 6 on Thursday night.

Martin Necas scored twice for Hurricanes, who flirted with becoming the first team to lose on home-ice in the series. In addition to trailing midway through the third period, they had a second-period goal disallowed after a Nashville challenge for goaltender interference.

“I think we got rewarded tonight,” Brind'Amour said. "That's the way I look at it. We finally got a bounce, something that went our way that we really haven't had this series. So I think that was nice."

Yakov Trenin scored twice to lead the Predators’ offense. Saros finished with 34 saves after racking up 110 stops through the two double-overtime wins that knotted the series at 2-2.

Once again, he repeatedly turned away clean looks by the Hurricanes while his teammates clogged up lanes to block shots or frustrate Carolina’s ability to get traffic in front of Saros above the crease until Staal did for the winner.

“It’s a tough loss for us,” Predators defenseman Roman Josi said. “I mean, I think in the third we kind of were in control of the game and they obviously score. Like I said before, it’s such a tight series. ... They just found a way to score in OT tonight.”

Necas made a terrific individual effort to get Carolina back in this one.

He charged up the ice on a one-man push, speeding past Matt Duchene to get behind the net and beat Saros with a wraparound score to tie it at 12:55 of teh third, sending a jolt through the Hurricanes lineup and rowdy home crowd.

Necas’ first goal came when he buzzed a puck over Saros’ left shoulder for the first-period score on the power play.

The Hurricanes' frustrations against Saros only grew when they finally beat the goaltender, only to see the goal nixed.

On the play, Carolina top defenseman Jaccob Slavin — back in the lineup for the first time since Game 1 — fired a shot from near the blue line that bounced off Staal’s right skate and into the net to tie it at 2-2 in the second.

But after a replay review, officials overturned the goal. The ruling was Carolina's Warren Foegele — who had touched Saros near the front right of the crease — impaired Saros’ ability to play his position back to his left as he tried to slide through a standing teammate in Josi.

The Predators announced Tuesday morning that the NHL has approved their request to increase their home capacity for Game 6 to 14,107 fans. That will be up roughly 2,000 from the Games 3 and 4 capacity in Bridgestone Arena.

“I think we’re programmed, we’re ready,” Nashville coach John Hynes said. “Our guys respond. I think we’ll certainly be ready to go for Game 6 and really excited about the opportunity we have in front of us here.”

Country music singer and past “American Idol” winner Scotty McCreery, from nearby Garner, sounded the pregame storm-warning siren for when they Hurricanes take the ice for home games.