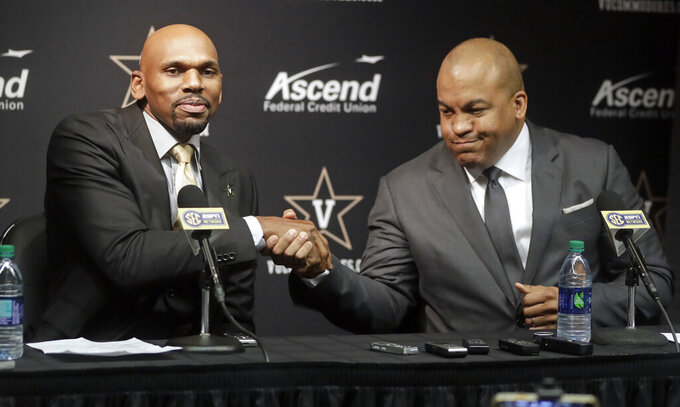 He had a couple of interviews for NBA head coaching jobs lined up, but then he got a call from the Commodores' new athletic director. The mutual respect between Stackhouse and Malcolm Turner — along with the opportunity to turnaround the Commodores men's program — was enough to lure him to the NBA veteran to the college ranks.

"When Malcolm approached me about the possibility of this job and being here and everything all-encompassing with this university, it was just hard for me to say no to him, and I'm super excited that they feel that I'm the guy to be able to bring the magic back to Memorial and I'm truly, truly excited about that," Stackhouse said Monday at a news conference.

His lone head coaching experience is two years in the G League where he got to know a fellow North Carolina graduate in Turner, who was the league's president. Turner took over as athletic director at Vanderbilt on Feb. 1.

Stackhouse succeeds Bryce Drew, who was fired March 22 after going 40-59 in three seasons. He takes over a program in the Southeastern Conference playing in the league's oldest basketball arena at Memorial Gym with three SEC regular-season titles, two conference tournament titles — the last in 2012 — and 15 NCAA Tournament appearances with the last in 2017.

Turner said Stackhouse became a candidate early for his ability to both connect and make players better.

"We are really grateful and really hopeful that Vanderbilt basketball has great history, but it shouldn't be relegated to just history," Turner said. "There's a bright future ahead for this program."

The Commodores also became the first SEC team in 65 years to go winless in league play with a 20-game skid capping a 9-23 season, and the two top-rated players already have left early for the NBA.

The 18-year NBA veteran and two-time All-Star was considered in NBA coaching searches last year by Toronto, New York, Charlotte and Orlando. He has been an assistant with Toronto and the Memphis Grizzlies, and he went 70-30 in two seasons coaching the Raptors' NBA G League team, reaching the finals twice and winning a championship.

He was the league's coach of the year for 2016-17 when Turner presented him the trophy.

Stackhouse committed only to flexibility on offense based on his personnel and a planned focus on defense, mostly man to man. A scorer during his career, Stackhouse said he incorporated schemes he didn't like to play against into his defensive philosophy.

He also is very familiar with recruiting from being recruited himself before signing with the late Dean Smith to North Carolina, and he's talked with coaches while running his own AAU program, Stackhouse Elite, founded in 2011 and based in Atlanta.

Stackhouse said his NBA experience will be a selling point for recruits. He met with his new team Sunday, and Stackhouse says he hopes to convince a couple Commodores who put their names in the NCAA transfer portal to stick around. He also needs to see what scholarships he has available with both Darius Garland and Simisola Shittu gone to the NBA draft.

Stackhouse also has been texting with Penny Hardaway, another former NBA star and now Memphis coach for tips on making the transition to college. He'll meet with Vanderbilt's compliance staff and hire his staff.

One thing remains the same, even if he'll be coaching in college.

"I'm trying to figure out: Is there going to be another basket out there? Are they going to start running backwards, double dribble allowed, something? I don't know," Stackhouse said. "It's basketball to me. It's teaching and coaching basketball."