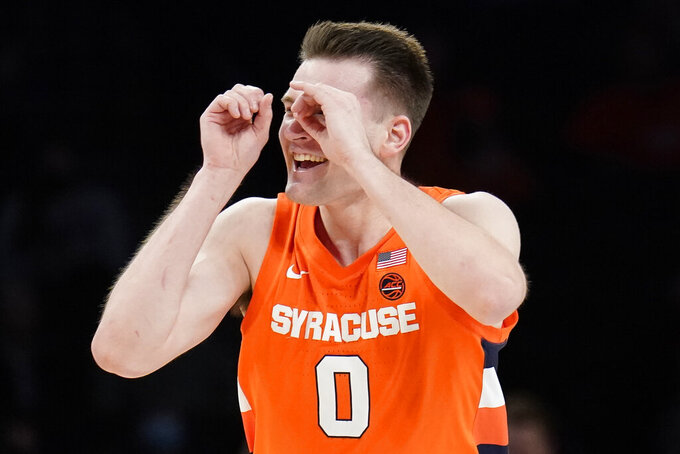 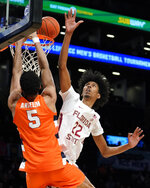 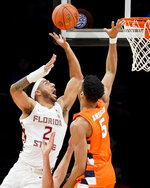 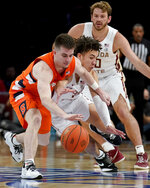 NEW YORK (AP) — Cole Swider had 28 points and 13 rebounds in 28 minutes, Joe Girard added 16 points and No. 9 seed Syracuse beat eighth-seeded Florida State 96-57 on Wednesday in the second round of the ACC tournament.

Syracuse advances to play top-seeded Duke in the quarterfinals on Thursday. But Syracuse, which lost both meetings against No. 7 Duke this season by 20-plus points, will be without leading scorer Buddy Boeheim after the ACC announced a one-game suspension for punching Florida State’s Wyatt Wilkes in the stomach during the first half. No foul was called on the play and Boeheim went on to score 14 points.

Syracuse went ahead by double figures with 10:52 left in the first half during a 11-0 run — with eight straight points by Swider. The Orange made three straight 3-pointers during the run, with Girard making the other, and led 49-26 at the break behind Swider's 20 points and nine rebounds.

Florida State missed eight straight shots midway through the first half and was 12-of-38 shooting at the break, including 1 of 13 from 3-point range. The Seminoles made just one of their first 15 shots of the second half — including 10 straight misses.

Jimmy Boeheim scored 12 for Syracuse (16-16), which claimed its second-largest margin of victory in a conference tournament game in program history.

Swider, who had 2, 36 and 6 points in his last three games, was 9 of 15 from the floor, including 4 of 6 from distance, for his second-highest scoring game of the season. Girard also made four 3-pointers and Buddy Boeheim added three.

Florida State (17-14) starters had just 16 combined points through the opening 29 minutes as the Seminoles trailed 70-34.

Matthew Cleveland scored 13 points off the bench for Florida State, which had its three-game win streak snapped. The Seminoles finished 2 of 25 from 3-point range and shot 32% overall.