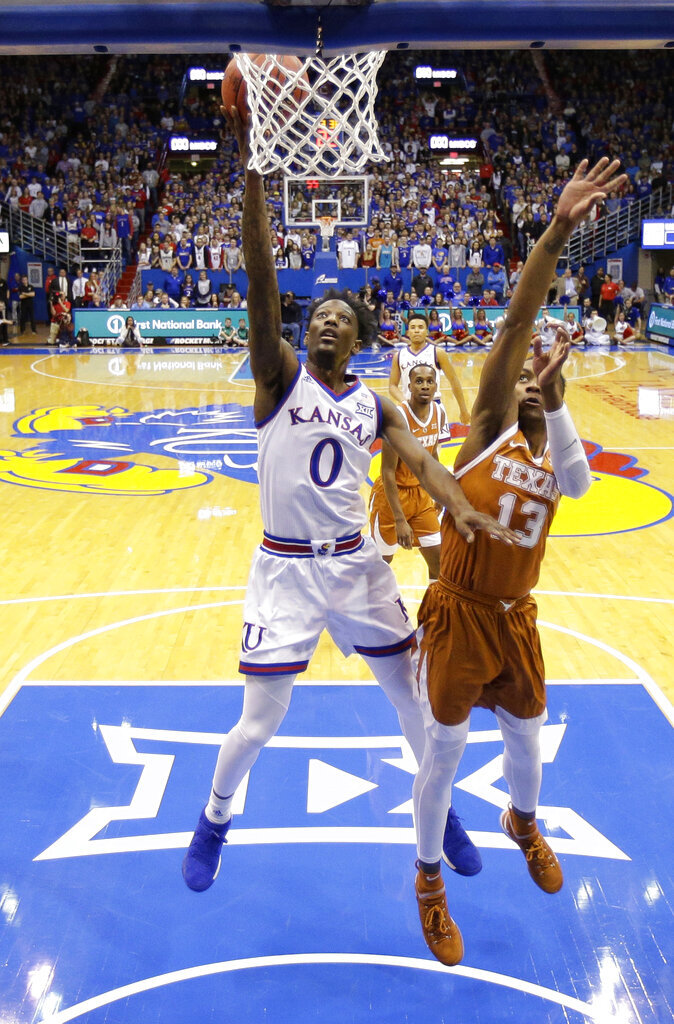 Kansas guard Marcus Garrett (0) gets past Texas guard Jase Febres (13) to put up a shot during the first half of an NCAA college basketball game Monday, Jan. 14, 2019, in Lawrence, Kan. (AP Photo/Charlie Riedel)

GAME OF THE WEEKEND: TCU at Kansas State. The Wildcats got preseason player of the year Dean Wade back on Saturday, and he helped K-State stun Iowa State 58-57. TCU followed up a two-point loss at Oklahoma by blasting West Virginia by 31 points on Tuesday. While neither team might be considered a title contender just yet, both have the capability to push for a strong finish — and Saturday's matchup in Manhattan could be a major step in that direction.

LOOKING AHEAD: Seventh-ranked Kansas travels to face West Virginia. The Mountaineers are 0-5 in the conference, their worst league start in 23 years. West Virginia played in the Big East back then. ... No. 8 Texas Tech plays at Baylor. The Bears beat Oklahoma State on Monday for their first league road win. But they'll be without star Tristan Clark, who is out for the season with a knee injury. ... The Cowboys will face Iowa State in Ames. It'll be a must win for the Cyclones, who play at Kansas and at No. 18 Mississippi next week. ... Oklahoma and Texas square off in Austin. The Longhorns are 2-3 in the league, but it'll be interesting to see if they gained any momentum from nearly knocking off the Jayhawks in Phog Allen Fieldhouse.

PLAYER TO WATCH: Marcus Garrett, Kansas: Garrett, a 6-foot-5 sophomore guard and the 2017 player of the year in Texas, exploded for 20 points on 8-of-11 shooting to help the Jayhawks hold off the Longhorns 80-78 last weekend. Kansas needs its backcourt to step up and help Dedric Lawson out with Udoka Azubuike out for the season, and Garrett's assertiveness against Texas was a good sign for the Jayhawks. Garrett's previous season high was just 11 points.

INSIDE THE NUMBERS: Fifteen players entered Wednesday's action shooting at least 50 percent from the floor. Jaxson Hayes of Texas led the way at 75 percent. ... TCU led the league with 80.4 points a game after its outburst against the Mountaineers. The Horned Frogs were also first in field goal percentage at 48.4. ... It hasn't been a great year at the charity stripe for the Big 12. Eight teams were shooting under 70 percent from the line heading into Wednesday's action, and Tech a paltry 71.4 percent led the conference.

ON THE WOMEN'S SIDE: Baylor moved up two spots to second in Monday's poll. The Lady Bears received six first-place votes. ... No. 11 Texas hosts TCU on Saturday, while No. 18 Iowa State — which lost to the Longhorns 64-62 in Ames last weekend, hosts Oklahoma. The Sooners, typically a strong program, are just 5-10 and are allowing a league-high 75.1 points per game.