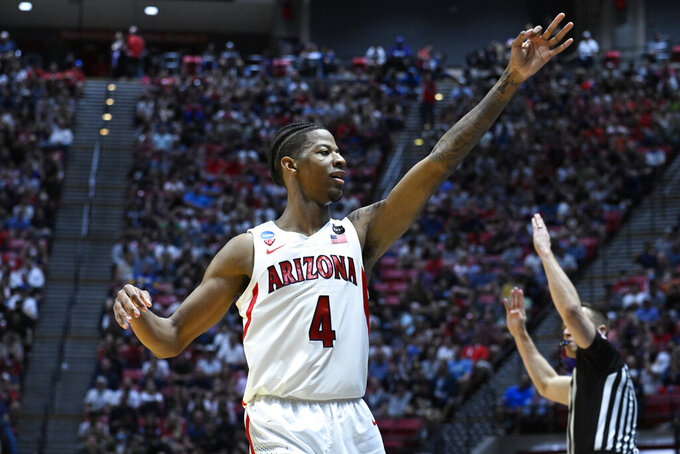 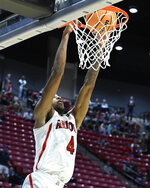 SAN DIEGO (AP) — Dalen Terry has been a defensive standout for Arizona all season, but he has stepped up on the offensive end the past couple of games.

Terry has set career highs in scoring the past two games, including 16 points in Friday night's 87-70 victory over Wright State in the first round of the NCAA Tournament.

With Kerr Kriisa still trying to come back from an ankle injury, Terry is likely to start at point guard again Sunday night when the top-seeded Wildcats (32-3) face No. 9 seed TCU (21-12) in a South Region second-round game.

“He’s really developed. With Kerr not having played, maybe we need a little bit more of a scoring punch out of him and he’s been opportunistic,” coach Tommy Lloyd said.

Terry has been the Wildcats’ point guard the past three games after Kriisa injured an ankle in a quarterfinal win over Stanford on March 10 during the Pac-12 Tournament.

The 6-foot-7 sophomore was named to the Pac 12’s All-Defensive team, but he is averaging 14.3 points since assuming point guard duties.

Even though Terry said he is having fun at the point, he knows he isn’t going to be at the position for long.

“I look at it as an opportunity that presented itself,” he said. “Obviously, I want Kier to come back. I want him to be healthy again because I know when he’s healthy doing what he does, we’re at our best.”

Kriisa took part in pregame warmups Friday night, but did not play. Lloyd has said Kriisa could come off the bench at some point.

Terry is shooting 50.5% from the field, but he is 14 of 21 in the last three games, including 6 of 9 on 3-pointers. Lloyd said the long-range shots were catalysts for the Wildcats in their past couple of wins.

“If teams are going to play off him, I’m comfortable with him taking those wide-open 3s. And he steps up and makes them in critical times,” Lloyd said.

Terry will go against TCU’s Mike Miles Jr. They have known each other for a long time and both tried out for USA Basketball’s U19 team, which won the gold medal at the FIBA World Cup. Miles ended up making the roster over Terry. TCU’s Jamie Dixon coached that team and tried to defuse any issues about Miles’ selection over Terry.

“The coaches don’t make that decision. They have a committee that does that, so I think we’ve played against a bunch of guys this year in that situation. But he is talented, athletic,” Dixon said.

Miles, the Horned Frogs’ leading scorer at 15.2 points per game, said the biggest key to guarding Terry is trying to limit him from running.

“Their whole team is good in transition, so I definitely know he is a good player. I know what to expect from him,” Miles said.

The most significant area Arizona will need to improve on from Friday night is eliminating turnovers. They committed 19 against Wright State and face a TCU squad that can match the Wildcats in being physical in the paint.

TCU, which won its first NCAA Tournament game in 35 years Friday night, is looking to make more history. A win would put the school in the Sweet 16 for the first time.

“Tommy was making that a point across the board that we’ve just got to be in attack mode,” Terry said. “This is a tournament game. This is March. Anything happens. We’ve just got to come out throwing punches."