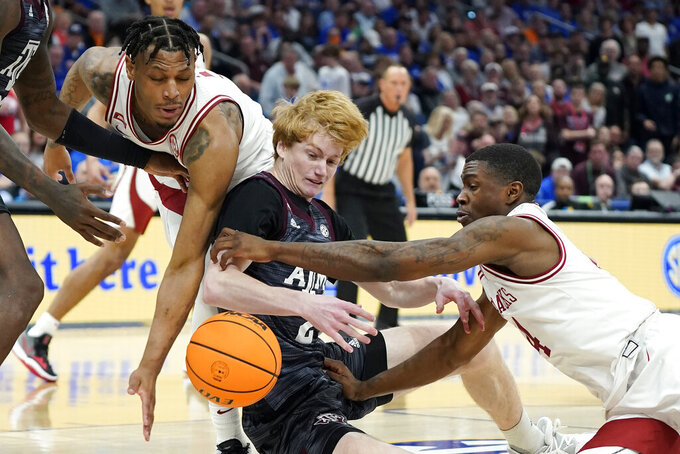 Arkansas guard Au'Diese Toney, left, and guard Davonte Davis, right, try to steal the ball from Texas A&M guard Hayden Hefner during the second half of an NCAA college basketball game in the semifinal round at the Southeastern Conference tournament, Saturday, March 12, 2022, in Tampa, Fla. (AP Photo/Chris O'Meara)

With three wins in three days over favored opponents, the eighth-seeded Aggies not only have landed an unlikely spot in the championship game of the SEC Tournament but almost certainly ensured their inclusion in the NCAA field of 68, too.

The Aggies can earn the SEC's automatic berth by beating No. 9 Tennessee on Sunday. But even with a loss in the final, they're likely in — only weeks after looking like they had no shot.

“That’s not up to me. I just go out there, and I play my game. That’s up to the higher-ups," leading scorer Quenton Jackson said after his 20-point performance helped the Aggies take down No. 15 Arkansas 82-64 in the semifinals on Saturday. "I try to make sure that me and my team are on the same page and we play as hard as we can every night.”

The Aggies (23-11) took down a ranked opponent for the second straight day, with Jackson also contributing six assists, five rebounds and four steals.

A&M improved to 8-1 since ending a month-long, eight-game losing streak in February.

“I think it's really just a testament to what we’ve been preaching to each other all week. We know that for us to have a chance to win any game, it’s got to start with our energy level and how we attack the game," the Aggies' Hayden Hefner said.

“I would go even further and say it’s a testament of everything that we have done since the year started, all the work that we put in from boot camp, to individuals, to practices, to all that," Jackson added. "It’s a testament of all of that.”

Hassan Diarra, whose clutch 3-pointer in the closing seconds of overtime gave the Aggies an 83-80 victory in A&M’s tournament opener, had 12 points. Tyrece Radford and Henry Coleman contributed 12 of 11 points, respectively, after playing key roles in a five-point upset of fourth-ranked Auburn in the quarterfinals.

Arkansas (25-8) split a pair of games with the Aggies in January but was no match for them Saturday after falling behind by double digits in the first half.

Stanley Umude led the Razorbacks with 20 points. Au’Diese Toney added 18, but leading scorer JD Notae was slowed by foul trouble and limited to five points — nearly 14 below his average — on 2-of-8 shooting.

“I think JD, obviously the foul trouble was problematic. It wasn’t just offense. I can’t remember JD’s defense like that since we’ve been together," Musselman said. "So it was both sides of the basketball, to be honest with you.”

The eighth-seeded Aggies opened a double-digit lead for the third straight day, leading 36-24 at halftime after squandering a 16-point lead during its victory over Florida and nearly letting a 20-point advantage slip away in a 67-62 upset of top-seeded Auburn on Friday.

This time, the Aggies didn’t waver.

Aggies coach Buzz Williams emptied his bench after leading by as many as 23 down the stretch.

College basketball icon Dick Vitale was honored before Saturday’s semifinals, with the SEC recognizing his contributions to the sport, the league and his fight against cancer. The Hall of Fame television analyst lives in nearby Sarasota, Florida, and was presented a basketball signed by the league’s 14 coaches. Vitale walked into Amalie Arena amid a standing ovation — and shouts of “Dickie V!” — and accepted the autographed ball from SEC commissioner Greg Sankey at midcourt.

The 82-year-old Vitale has been public about his treatment for assorted medical issues, including at least two forms of cancer.

Texas A&M: The Aggies are in the tournament final for the second time since moving from the Big 12 to the SEC. They lost to Kentucky in overtime in 2016.

Arkansas: The Razorbacks shot 17% from behind the 3-point arc, missing 15 of 18 attempts.

Texas A&M: Faces No. 9 Tennessee. The Volunteers won the regular season meeting between the teams 90-80 in Knoxville on Feb. 1.

Arkansas: Awaits its seeding and opening opponent in the NCAA Tournament.