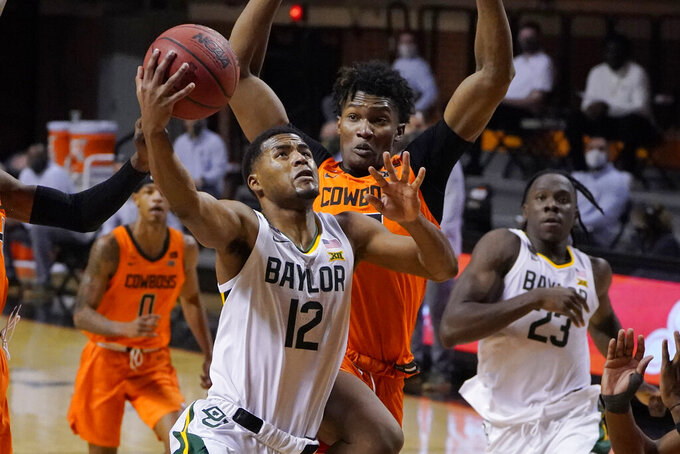 FILE - Baylor guard Jared Butler (12) goes to the basket in front of Oklahoma State forward Matthew-Alexander Moncrieffe, rear, in the first half of an NCAA college basketball game in Stillwater, Okla., in this Saturday, Jan. 23, 2021, file photo. Butler is The Associated Press Big 12 men's basketball player of the year and a member of the All-Big 12 first team, announced Tuesday, March 9, 2021. (AP Photo/Sue Ogrocki, File)

There really are no tougher matchups for Baylor guards Jared Butler, Davion Mitchell and MaCio Teague than in those long hours they spend in the gym going 1-on-1 against each other.

It is a difficult matchup for opposing teams when that trio is on the court together for the Bears, the Big 12 champions and a No. 1 seed in the NCAA Tournament for the first time.

“I think that it comes from chemistry. Just off the court, we want to see one another do great,” Mitchell said. “We all knew we had to sacrifice just because we all knew how good we could be. Each one of us could score 20 (points) every night. That’s what makes our team great. Everyone had to sacrifice something.”

Butler is the first Baylor player ever to be a first-team AP All-American and was also the AP Big 12 player of the year. The 6-foot-3 junior, who bypassed the chance for early entry in last year's NBA draft, averages 17.1 points a game while leading the conference in 3-point shooting and steals.

Mitchell, a third-team AP All-American, is the lightning quick guard who averages 14.1 points a game and leads the Big 12 with his 51.5% field goal shooting; Butler and Teague both shoot nearly 49% from the field to rank fourth and fifth. Mitchell has also earned the nickname “Off Night” for his reputation as a defender and making it tough on whoever he is going against in a game.

“I think it’s the most sacrificial group of guys I’ve been around. Sacrificing their time in the gym to be better for the team, sacrificing stats for the betterment of the team, just sacrificing egos, and that’s a hard thing to do among 20 and 21-year-old men,” Butler said. “Everybody across the board has had to sacrifice something, and we’ve all done that. ... It’s truly a blessing to be around this group of guys.”

All three guards got to Baylor after starting college at other schools, and all are expected to be playing their final games for the Bears (22-2) in the NCAA Tournament. Their first-round game is Friday against Hartford (15-8) at Lucas Oil Stadium in Indianapolis.

Butler initially signed with Alabama, and enrolled in school there during the summer of 2018, but never took part in any offseason workouts before getting released from his letter of intent and going to Baylor.

While Butler was able to play immediately for the Bears, and averaged 10.2 points as a freshman, the other guards had to redshirt that 2018-19 season after transferring. Mitchell played 34 games as a freshman at Auburn, and Teague had started 66 of his 67 games over two seasons at UNC Asheville.

The Bears are 48-6 in the two seasons since Mitchell and Teague became eligible to play. Baylor set a Big 12 record with a 23-game winning streak last year, and its 18-0 start this season was the best in school history on way to the school's first conference title in any league since 1950.

“It really goes back to the character and makeup of them individually because they do care about the team, they care about winning. It's not about their stats, their accolades," coach Scott Drew said. “Knowing one guy gets to bring the ball up, they all do a great job sharing, rotating and making sure everybody has a feel. ... They’re concerned for each other, and concerned for winning, and knowing we’re a much better team when all three are clicking.”

During that season when Mitchell and Teague were having to redshirt, and unable to play for the Bears, they were constantly going against each other in ultracompetitive 1-on-1 matchups after hard workouts with coaches. Every shot taken by the 6-foot-2 Mitchell was contested by Teague's impressive 6-11 wing span — seven inches more than how tall he is.

“It’s definitely helped me offensively to be able to create my shot off the bounce,” Mitchell said. “And for him, I mean, I think I'm a pretty good defender, so I just make it hard for him. And you can see he can do things off the bounce. He became a better defender, just by those 1-on-1 sessions. He made it hard for me sometimes just keeping me away from the basket.... Just playing MaCio 1-on-1 help me.”