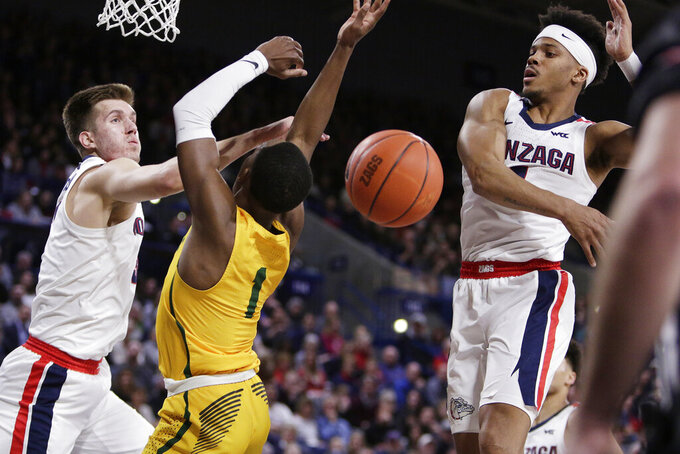 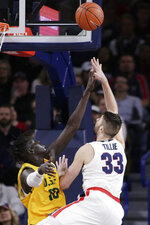 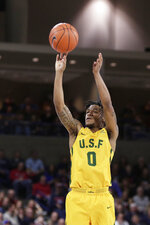 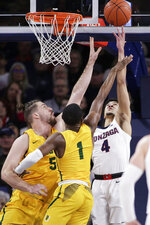 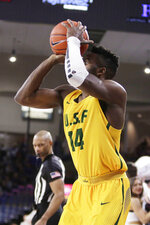 Gonzaga coach Mark Few had a few words for his team at halftime Thursday night.

“We were not being who we were,” Few said. “Not doing the things that have made us so successful this year.”

Indeed, Gonzaga trailed 31-22 in the first half.

“That's about as poorly as we've played on the offensive end in the first half,” Few said.

But the Zags, who lead the nation in scoring, could not be contained for long. They erupted for 49 points in the second half while holding the Dons to 23 points, and cruised to their 19th consecutive victory.

“We played spectacularly on the defensive end in the second half,” Few said.

Filip Petrusev scored 16 points and Ryan Woolridge 12 for Gonzaga (27-1, 13-0 West Coast), which is seeking to go undefeated in the league for the second consecutive season.

With the win, Gonzaga clinched at least a share of an eighth consecutive regular-season WCC title.

Five of San Francisco's first seven baskets were 3-pointers, three by Minlend, as the Dons took a 19-16 lead. They pushed the lead to 25-16.

Minlend scored a pair of baskets as the Dons took a 31-22 lead at halftime, despite shooting just 33% in the first half. Gonzaga shot 38%, but committed eight turnovers and made just one 3-pointer, compared to five for the Dons.

“The offense scoring 22 points in the first half is not who we are,” Petrusev said.

Asked if the team was worried they might lose for the first time since November, Petrusev said: “We never worried we are going to lose.”

Corey Kispert hit a pair of 3-pointers as the Zags extended their lead to 46-33, outscoring the turnover-prone Dons 24-2 to open the second.

San Francisco found its shooting touch and a basket by Minlend cut Gonzaga's lead to 56-49 late in the second.

But the Bulldogs outscored the Dons the rest of the way for the win.

“We had to play a full 40 minutes to win,” coach Todd Golden said. “We really struggled to take care of the ball to begin the second half, and that cost us.

“I truly believe we have the blueprint for what it takes to beat these guys, and I hope we get another shot in the conference tournament,” Golden said.

Ryan Woolridge scored 12 points, handed out seven assists and had five steals for Gonzaga while playing all 40 minutes. “He's our only point guard in the program right now,” Few said. "He's been phenomenal.

Gonzaga has won 40 straight regular-season conference games and 37 straight home games, both the longest streaks in the nation.

San Francisco: The Dons' earlier four-point loss to Gonzaga was the Bulldogs' narrowest victory in the league this year ... The Dons average nearly 76 points, despite shooting just 44% ... The Dons lost three of their previous four games, in part because they failed to connect much from 3-point range.

Gonzaga: The Zags came in leading the nation in scoring at 88.6 points per game, and in scoring margin at 21.3 points ... The Zags are the only team in the nation with seven players averaging in double figures; no other team has more than five ... Gonzaga's only loss this season was to Michigan on Nov. 29.

Gonzaga plays at No. 23 BYU on Saturday. The Zags beat the Cougars 92-69 in Spokane earlier. “There will be 18,000 there and it will be electric,” Few said. “BYU is having an phenomenal year. We have to play great to get out of there with a win.”