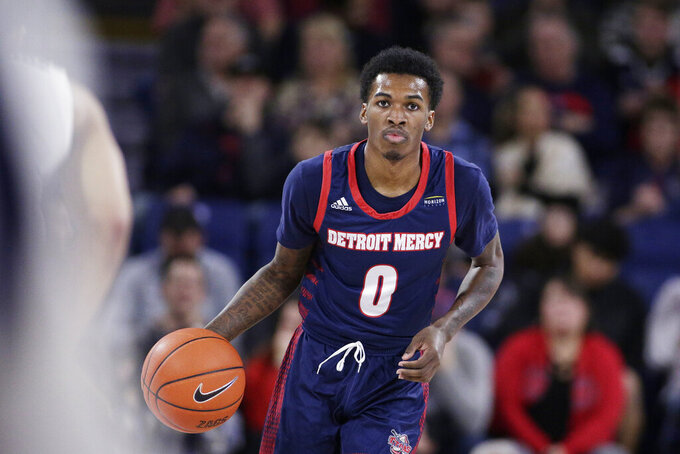 FILE - Detroit Mercy guard Antoine Davis (0) brings the ball up the court during the first half of an NCAA college basketball game against Gonzaga in Spokane, Wash., on Dec. 30, 2019. Davis enters the 2022-23 season as one of the most noteworthy players from mid-major or low-major programs. His 429 career 3-pointers put him just 80 away from the Division I record. (AP Photo/Young Kwak, File)

Detroit Mercy guard Antoine Davis has a chance to end his career as one of the most prolific scorers and 3-point shooters in college basketball history.

Davis is more concerned with earning the NCAA Tournament berth that has eluded him thus far.

The 6-foot-1 Davis entered the transfer portal during the offseason but opted to play one more season for his father. Mike Davis took over Detroit Mercy after reaching the NCAA Tournament four of his six seasons at Texas State, but he still hasn’t earned a bid at his current school.

“I experienced it for myself as a spectator but not as a player,” Antoine Davis said as he recalled those years watching his father coach Texas State. “It’s been rough, but I look forward to this season. We’re all on the same page. Everybody wants to do the same thing. I think we can make it happen.”

Reaching the NCAA Tournament is just about the only thing Antoine Davis has failed to accomplish in his stellar college career. He enters the 2022-23 season as one of the most noteworthy players from mid-major or low-major programs.

If Davis matches his output from last season, when he scored 694 points, he would end his career second on the all-time list. Pete Maravich owns the record with the 3,667 points he scored in his three-season career at LSU from 1967-70.

Davis committed to Houston in high school but changed his mind and opted for Texas State to play for his father, who owns a 397-310 career record and coached Indiana to an NCAA Tournament final in 2002. When his dad took the Detroit Mercy job, Davis ended up enrolling there instead.

“He knows my game better than anybody else,” Davis said. “He’s been working me out for years and years. He just knows what I can do and everything. It wouldn’t have to be anything different. I knew his system for the most part, and I really wanted to play for him, at the end of the day.”

He thought about leaving Detroit Mercy and the Horizon League this year. Davis entered the transfer portal and strongly considered BYU and Kansas State before choosing to finish his college career where he started it.

“It would feel a little off playing somewhere else or ending my career somewhere else,” Davis said. “That’s what ultimately made me come back.”

Some other players from mid-major or low-major programs who bear watching:

Abmas burst onto the scene in 2021 when he averaged 26.7 points in three NCAA Tournament games to help Oral Roberts beat Ohio State and Florida before falling to Arkansas in the Sweet 16. He led Division I with 24.5 points per game that season. Abmas followed that up by averaging 22.8 points last season to rank fifth. His 3.8 3-pointers per game ranked third.

Carry, a Duquesne transfer, was the Mid-American Conference’s player of the year in his first season at Kent State. The 6-1 guard ranked second in the MAC in assists (4.8) and fifth in scoring (17.9) and made the MAC’s all-defensive team.

The Oregon transfer was the Colonial Athletic Association player of the year last season in his first year at Hofstra. Estrada led the CAA in scoring (18.5) and assists (5.0) and also had 5.7 rebounds and 1.5 steals per game.

Although he’s a 6-foot-8 forward, Evbuomwan actually led the Ivy League in assists last season with 5.1 per game. He was named the Ivy player of the year. Evbuomwan, who is from Newcastle, England, also ranked fourth in the league in scoring (16.0), rebounding (6.7) and steals (1.4).

McGhee has been named ASUN player of the year each of the last two seasons. He averaged 24.6 points, 4.5 rebounds and 3.6 assists in 2021-22. He led all Division I players with 142 3-pointers and ranked second in points per game.

After starting his career at Seton Hall and playing two seasons at Tulane, Walker has found a home at UAB. Walker ranked eighth in Division I in 3-pointers per game (3.41) and 16th in points per game (20.3) last season while leading Conference USA in both categories. He was named Conference USA player of the year.