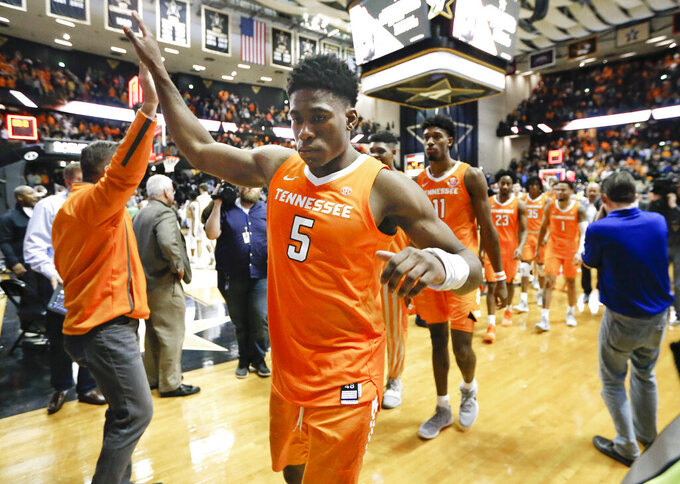 NASHVILLE, Tenn. (AP) — Grant Williams had the game of his life and the best free throw shooting performance by a college player in six decades.

Tennessee needed every last point in its first outing this season as the nation's top-ranked team.

Williams scored a career-high 43 and made all 23 free throws as the Volunteers avoided a repeat of their last trip to Memorial Gym when also freshly minted No. 1, holding off Vanderbilt 88-83 in overtime Wednesday night.

"It's something I've worked on since the summer and something I knew I needed to improve on," Williams said. "I knew the last game I missed two, and it frustrates me when I miss those. You don't get many opportunities like that, and tonight I did. And you have to take advantage of those. You think about it. I miss one, two, three of those, we lose the game."

Williams outshot Vanderbilt at the line all by himself, and his three-point play with 31.6 seconds left in overtime put Tennessee ahead to stay.

"I'd say that he did the job for us tonight," Tennessee coach Rick Barnes said.

The Volunteers (17-1, 6-0 Southeastern Conference) won their 13th straight game and first since moving to No. 1 in the AP Top 25 on Monday for the second time in program history. They also have won five of the last six against their in-state rival.

"We've got to understand you're going to get the best shot from a lot of people every single night," Barnes said. "But we found a way. We weren't perfect by any stretch of the imagination. At the end of the game, we found a way to make some plays."

The Commodores (9-9, 0-6) came in hoping to pull off their seventh upset of a No. 1 team in Memorial Gym, a list of wins that includes knocking off Tennessee on Feb. 26, 2008, a day after the Vols took over the top-ranked spot. That squad was ranked in the Top 25, but these Commodores are off to the school's worst start in SEC play and have only one senior.

"We made some huge strides since our last couple games," Vanderbilt coach Bryce Drew said. "Just crushed for them, crushed for them that it didn't turn out with a win for all their effort."

Jordan Bone added 14 for the Vols.

Tennessee trailed 76-70 before Williams rallied Tennessee in the final 1:22 of regulation. He hit two free throws off a flagrant foul on Clevon Brown with 1:22 left. Williams then scored off an inbounds play to pull the Vols to 76-74, and Admiral Schofield hit a jumper with 38.1 seconds left to tie it at 76.

Williams blocked Lee's layup, then Aaron Nesmith blocked Jordan Bowden's layup try for the Vols. After a scramble for the ball, Williams came up with the steal and called timeout with 3.3 seconds to go. Brown blocked Williams' 3-point try, and the Vols couldn't get another shot off.

The Commodores not only outrebounded Tennessee (33-30), Drew got an impressive shooting performance from his team as it made 50 percent (30 of 60) from the floor and 10 of 21 beyond the arc.

The Vols missed a couple of chances in the final seconds before taking a 38-37 lead into halftime. They never led by more than six in the second half.

Tennessee: The Vols have their longest winning streak in nearly a century — they opened the 1922-23 season by winning their first 14 games. The defending co-SEC regular-season champs have won 10 straight league games in regular-season play.

Vanderbilt: The Commodores' worst start to SEC play now is six straight losses, but this has to be a strong confidence booster for a group that has led in all but one of those games.

Williams posted the best scoring performance for Tennessee since Allan Houston also had 43 points against LSU on Feb. 10, 1990, and it was tied for fifth in school history. It was the most points allowed by Vanderbilt to one player since Jan. 3, 2007, when Morris Almond scored 44 for Rice.