Top rebounding tandem Tshiebwe, Culver back for No. 15 WVU 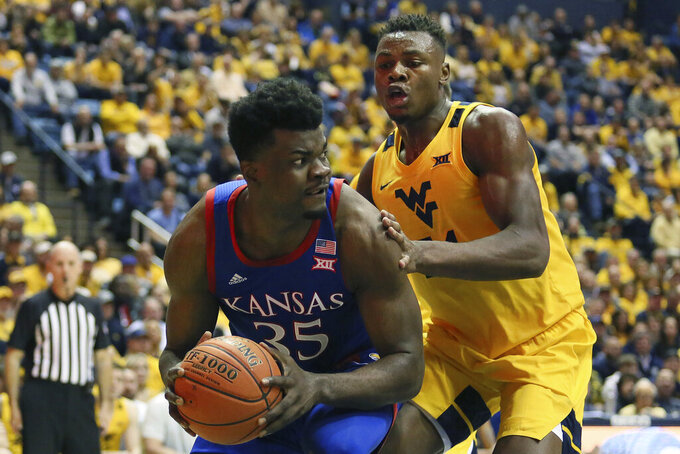 FILE - Kansas center Udoka Azubuike (35) is defended by West Virginia forward Oscar Tshiebwe (34) during the first half of an NCAA college basketball game in Morgantown, W.Va., in this Wednesday, Feb. 12, 2020, file photo. West Virginia opens the 2020-21 season ranked No. 15 in the AP poll and returns four of the top five scorers from the team that went 21-10 last season. (AP Photo/Kathleen Batten, File)

MORGANTOWN, W.Va. (AP) — West Virginia coach Bob Huggins has one of the nation's top rebounding tandems back, and if the team shooting accuracy and ball handling can improve, the 15th-ranked Mountaineers could be poised to contend for an elusive Big 12 championship.

Sophomore Oscar Tshiebwe and junior Derek Culver return. Yet dominating on the glass might mean the Mountaineers' own shots aren't falling, something that was a problem a year ago.

West Virginia went 11-1 to start the season, then struggled to find its scoring touch in league play and went 9-9 before the pandemic shut down college basketball entering the league tournament.

West Virginia hasn't had a go-to scorer since Jevon Carter three years ago, leaving Huggins to use a basket-by-committee approach. Tshiebwe and Culver were the only players to average in double-figure scoring for the season.

The pair combined for 18 rebounds per game and ranked second and fifth, respectively, in the league.

They also were responsible for one-fourth of West Virginia's turnovers.

“I think it was just going faster than they were capable of going," Huggins said. "It’s a fine line. You want them to go like crazy to go rebound it and defend and do those things. And then we’ve got to get them to slow down at the offensive end.”

The Mountaineers shot 50% from the floor just four times a year ago. They were the Big 12’s worst from 3-point range, making just 29% of their attempts.

Huggins is confident that statistic will improve. He said he’ll put guard Sean McNeil, who led the team with 29 3-pointers made a year ago, in a shooting contest against anyone in the country.

“We’ve got guys who can make shots,” Huggins said. “I would be totally stunned if we didn’t have a good year shooting the ball from beyond the arc.”

Huggins also pointed out there was a game against Oklahoma when the Mountaineers missed nearly two dozen shots within 4 feet of the basket.

“Obviously we can’t do that, either,” he said.

Some other things to know about the Mountaineers:

The lone vacated starting spot will likely go to sophomore guard Miles “Deuce” McBride, who scored in double figures in 16 games. Senior guard Taz Sherman could get an occasional start against smaller lineups. They combined for six starts and are among nine returning players who logged at least 13 minutes per game.

“It makes for some really competitive practices,” McBride said. “Everybody's always going after each other. That's where you can show you're supposed to earn time is in practice. That's definitely a plus because it shows how you really can't take a play off.”

West Virginia lost one-fourth of its scoring production with the departures of forward Jermaine Haley, guard Chase Harler and two others. Among five newcomers are Jalen Bridges, a 6-7 redshirt freshman, and 6-10 freshman Isaiah Cottrell.

Huggins enters the season with 881 career coaching victories, four behind North Carolina’s Roy Williams. A solid season could move them past Bob Knight’s 902 wins, which are third on the Division I career coaching list. Syracuse’s Jim Boeheim is second with 964 and Duke’s Mike Krzyzewski is first with 1,157.

West Virginia is capping attendance at home games at 3,000 fans, or about 20% of the arena's capacity, due to the coronavirus pandemic. Fans will be required to wear masks except when eating and drinking. Tickets will be distributed through smartphones to avoid being handled by security personnel at the gate.

West Virginia, which is picked to finish third in the Big 12 behind Baylor and Kansas, opens the season Nov. 25 against Texas A&M in an eight-team tournament in Sioux Falls, South Dakota. The Mountaineers' home opener is Dec. 2 against Youngstown State and they open Big 12 play Dec. 18 at home against Iowa State.