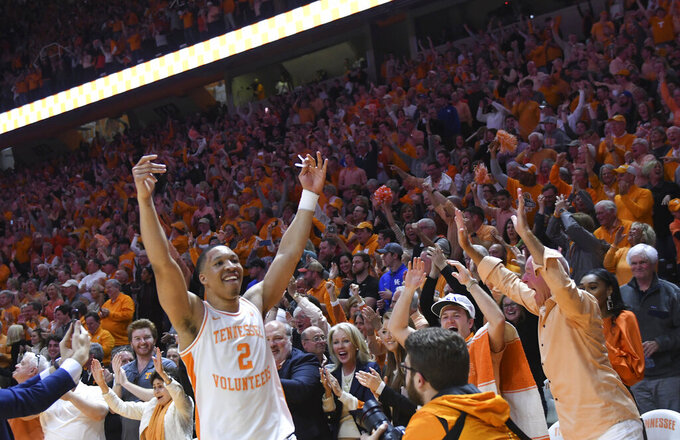 NASHVILLE, Tenn. (AP) — While a tougher Southeastern Conference Tournament field might lead to drama-filled games, the annual question of whether anyone can knock off Kentucky still looms.

The tournament is back in Music City after a year away with the Wildcats looking for a fifth straight SEC tournament title and 32nd all-time. A No. 1 seed in the NCAA Tournament possibly awaits the SEC champion.

Then there's the off-court mystery with the cloud looming over the league's regular-season champion.

No. 9 LSU is the SEC's hottest team, but may play without its head coach and a star freshman.

While the Tigers have won a league-best five straight and own the SEC's best road record at 9-1, LSU coach Will Wade remains suspended indefinitely after reports that an FBI wire-tap captured Wade's telephone conversations with a person convicted last year of funneling money to the families of basketball recruits. LSU could decide Tuesday whether freshman Javonte Smart will play after holding the guard out of the last game.

"I haven't been told otherwise that I'm not going to be," interim LSU coach Tony Benford said of coaching the Tigers during the SEC Tournament.

LSU, whose lone SEC Tournament title came back in 1980, has an easier path to the championship game with both No. 4 Kentucky and No. 8 Tennessee poised for a semifinal clash in the bottom half of the bracket. Kentucky coach John Calipari is more focused on playing either Alabama or Mississippi on Friday night.

"If we can get by the first, I'm probably not even worried that we're playing the second game," Calipari said.

Tennessee, which lost the final to Kentucky last year, hasn't won the SEC tournament since 1979. The Vols are 4-3 over their past seven games and have dropped to their lowest ranking of the season.

Coach Rick Barnes said he didn't know enough about the LSU situation but would like to think the right thing will be done.

"What I mean by that, the No. 1 thing in the spirit of competition is everybody plays on a level field," Barnes said.

Some other things to know about the SEC Tournament starting Wednesday night at Bridgestone Arena:

BATTLE FOR NO. 1 SEED

The SEC has three teams in the Top 25 in Kentucky, Tennessee and LSU. Beating Tennessee in the regular season finale moved Auburn back into the rankings at No. 22. Kentucky (26-5) currently is projected as a No. 1 seed in the NCAA Tournament, though Tennessee could make its case by advancing to Sunday's final.

The SEC sent a league-record eight teams to the NCAA Tournament a year ago and hopes to match that this season. First, the SEC needs Florida (17-14, 9-9) to beat Arkansas (17-14, 8-10) on Thursday after the Gators lost their last three games. Alabama's hopes also have thinned after a three-game skid.

"If we weren't able to have success, I'd feel very uneasy for a lot of reasons, probably the biggest being we're coming off a loss," Florida coach Mike White said. "I'm not going to worry about bracketology."

The Gamecocks earned the No. 4 seed, and Barnes argued South Carolina absolutely is an NCAA team if the selection committee looks at how Martin took South Carolina to Wyoming and Michigan rather than staying home for easy nonconference wins.

Benford expects LSU will have freshman forward Naz Reid available after sitting out the regular season finale against Vanderbilt. Reid took an elbow to the head, which drew blood, in last week's overtime win at Florida. Benford said Reid was visiting a doctor again Monday and hoped the forward will be ready to go.

South Carolina, which doesn't play until Friday, won't decide until later this week when freshman guard A.J. Lawson returns from a sprained left ankle that cost him the last three games. Auburn is bringing center Austin Wiley to Nashville after missing the last six games with a lower right leg injury. Wiley has played only 27 minutes over the past 25 games, and coach Avery Johnson said they want to make sure Wiley is pain-free before he plays again.

The Commodores are mired in the worst drought in SEC play in 65 years and have yet to win in 2019, having lost all 18 league games in a skid that's at 19 counting a nonconference loss in late January. They play the late game Wednesday night against Texas A&M, and coach Bryce Drew is pitching this as a fresh start.