Tubelis, Kriisa stand out in No. 2 Arizona's win over Utah 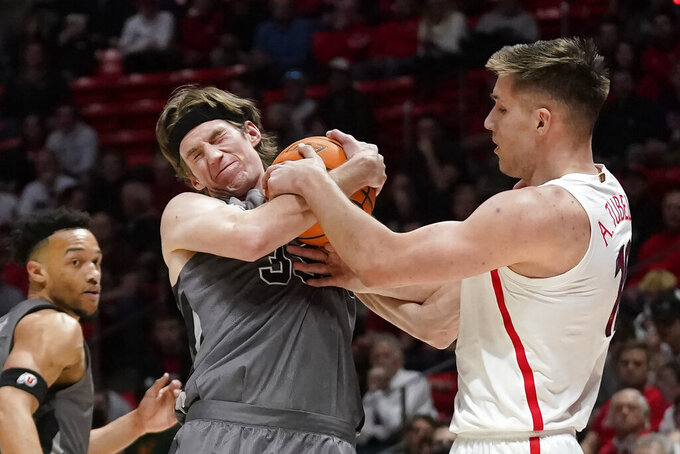 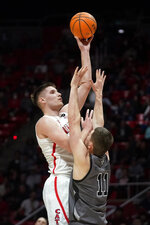 SALT LAKE CITY (AP) — In an attempt to protect the interior against the taller Arizona Wildcats, Utah dared them to shoot from the perimeter.

Kerr Kriisa happily obliged and wound up with a triple-double, which was Arizona’s first in 18 years.

Teammate Azuolas Tubelis scored 23 points to help power the No. 2 Wildcats over Utah 97-77 on Thursday night.

Kriisa had 21 points, 10 rebounds and 10 assists, becoming the first Wildcats with a triple-double since Andre Iguodala in February 2004. But it took a little lobbying to make it happen.

With Arizona up by more than 20, Kriisa had exited the game with nine rebounds. But when he realized how close he was to the statistical mark, he lobbied Arizona coach Tommy Lloyd to go back on the court.

“Put me back in and you’re gonna see the hardest box-out that I’ve ever done,” Kriisa told Lloyd.

After Utah took its only lead of the game at 28-27, Arizona finished the half on a 26-5 run that took just 6:12 of game time. The surge included five 3-pointers by Kriisa.

“They got aggressive with us and I thought their pressure really bothered us. We had some catastrophic turnovers when we just threw it to them and it led to their dunks,” Utah coach Craig Smith said.

The final shot came from beyond midcourt just before the halftime buzzer which gave the Wildcats a 53-33 at the break. Kriisa held his arms up high as he was mobbed by his teammates.

“I just got my rhythm going. And, yeah, I mean, it’s pretty hard to describe the feeling,” Kriisa said.

Arizona did all that without attempting a single free throw in the half.

The Wildcats then scored the first nine points of the second half to put the contest out of reach. Two free throws by Tubelis made it 62-33 with 17:57 remaining.

Kriisa, a sophomore guard from Lithuania who was shooting 33.9% from long range, matched his career high in the first half with seven 3s. In the second half, he focused on hitting the board distributing the ball to help the Wildcats record 24 assists.

“I’m happy for him. I obviously had no idea that he was capable of getting a triple double … It’s pretty cool,” Lloyd said after admitting it was against his philosophy to let players chase statistics but that Kriisa would probably never approach that many rebounds again.

Arizona leads the nation in assists (20.4 per game), rebounds (43.1) and assist rate, and followed suit against the Utes.

In nearly every game, the Wildcats have gone on a big run of 10 consecutive points or more and they had a couple of devastating runs against Utah.

Arizona jumped to 8-0 lead on layups and dunks but Utah caught them at 15, bolstered by seven points each from Carlson and Gach. Utah kept it close with dogged defense until the Kriisa-led outburst at the end of the half that blew the game open.

When the Wildcats can run, they dominate. It all starts with defense.

“We play with good force and good pace. … When we can contest shots at the rim and be aggressive taking away 3s, then that leads to transition basketball and that’s how those runs happen,” Lloyd said.

And when Arizona is rolling, even half-court shots swish.

“It’s a fast break or two and maybe even a half-court 3, things like that. It’s a combination of how our defense complements our offense. We’re pretty relentless,” Lloyd added.

Arizona: As they have done all season, the Wildcats were able to flip a switch and dominate the game with a 35-5 surge bridging the half. Their defense was suffocating and they scored in bunches, primarily in transition — 27 fast-break points and 52 points from the field.

Utah: The Utes have played much better since their historic 10-game losing streak, but they disintegrated against the Wildcats pressure during the game-deciding run.

The Wildcats looked every bit the No. 2 team in the country, especially when they are flying up and down the court for dunks and layups.