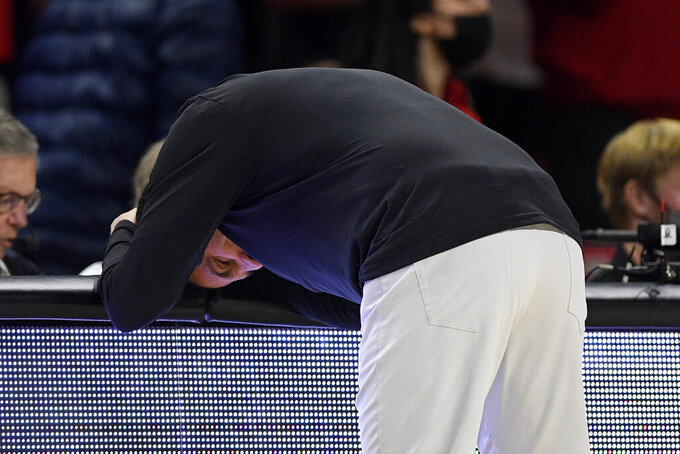 Maryland coach Mark Turgeon reacts to a foul called against the team during the second half of an NCAA college basketball game against George Mason, Wednesday, Nov. 17, 2021, in College Park, Md. (AP Photo/Nick Wass)

Mark Turgeon's tenure at Maryland is over, less than a month after the start of his 11th season at the helm.

Again, the Terrapins were struggling to reach their potential — although the abrupt change still came with a jolt, just eight games into the 2021-22 campaign.

“After a series of conversations with Coach Turgeon, we agreed that a coaching change was the best move for Coach Turgeon and for the Maryland men’s basketball program,” athletic director Damon Evans said in a statement. “He has dedicated over a decade of his life to the University of Maryland, and has coached with distinction and honor.”

Maryland announced Friday that Turgeon was stepping down, and the athletic department described the move as a mutual decision. Assistant Danny Manning was made interim coach for the rest of the season.

When he took over, Turgeon had the challenging task of replacing Gary Williams, who led the Terrapins to their only national title in men's basketball in 2002. Turgeon mostly kept Maryland relevant in both the ACC and Big Ten, but the program never reached its previous heights.

The Terrapins won at least 23 games in five of the past seven seasons, but Maryland has reached the Sweet 16 just once under Turgeon and hasn’t gone further. The Terps began this season ranked in the Top 25, but a loss at home to Virginia Tech on Wednesday night dropped them to 5-3 on the season.

“After several in-depth conversations with Damon, I have decided that the best thing for Maryland basketball, myself and my family is to step down, effective immediately, as the head coach of Maryland basketball,” Turgeon said. “I have always preached that Maryland basketball is bigger than any one individual. My departure will enable a new voice to guide the team moving forward."

Turgeon's exit comes as high-profile college programs have seemed increasingly willing to move on from their coaches before the end of the season. That's been particularly evident in football, with Southern California, LSU and Florida among the most notable examples. It remains to be seen if the trend will continue through the basketball season as well, but Turgeon's departure may be an early indicator.

Maryland does have an experienced option to turn to. Manning, who led Kansas to the 1988 NCAA title as a player, spent six years as the head coach at Wake Forest before joining the Terps as an assistant this season. Manning and Turgeon played three seasons together at Kansas.

Manning also was the head coach at Tulsa before taking over the Wake Forest program.

“I take a great deal of responsibility in being named interim head coach of the Maryland men's basketball program," Manning said in a statement Friday night. “Our staff remains focused on making sure we are there to support our players in every facet. I ask the entire Maryland community to rally around our players and all of our families and be there to support them throughout the rest of the season.”

Maryland won the Big Ten in 2020, its first conference title since joining the league in the middle of the decade. The Terps weren't able to build on that breakthrough, however. The NCAA Tournament that year was canceled because of the coronavirus pandemic, and last season the Terrapins went through an inconsistent 17-14 campaign.

Turgeon went 226-116 at Maryland and is 476-275 overall as a head coach. He coached at Jacksonville State, Wichita State and Texas A&M before being hired to take over the Terrapins.

“Maryland basketball has been my passion and focus for the last 10 seasons, and I am extremely proud of what we have accomplished," Turgeon said. "It is through the combined effort and commitment from our coaches and players, both past and present, that we have sustained consistent success in a sport that is ultra-competitive. ... It has truly been an honor to be the men’s basketball coach at the University of Maryland.”

Maryland said a national search for the next coach will begin after the season. Manning's first game in charge is this weekend when the Terps open Big Ten play Sunday against Northwestern.