Turner’s buzzer-beater gives No. 17 Vols win over No. 20 VCU 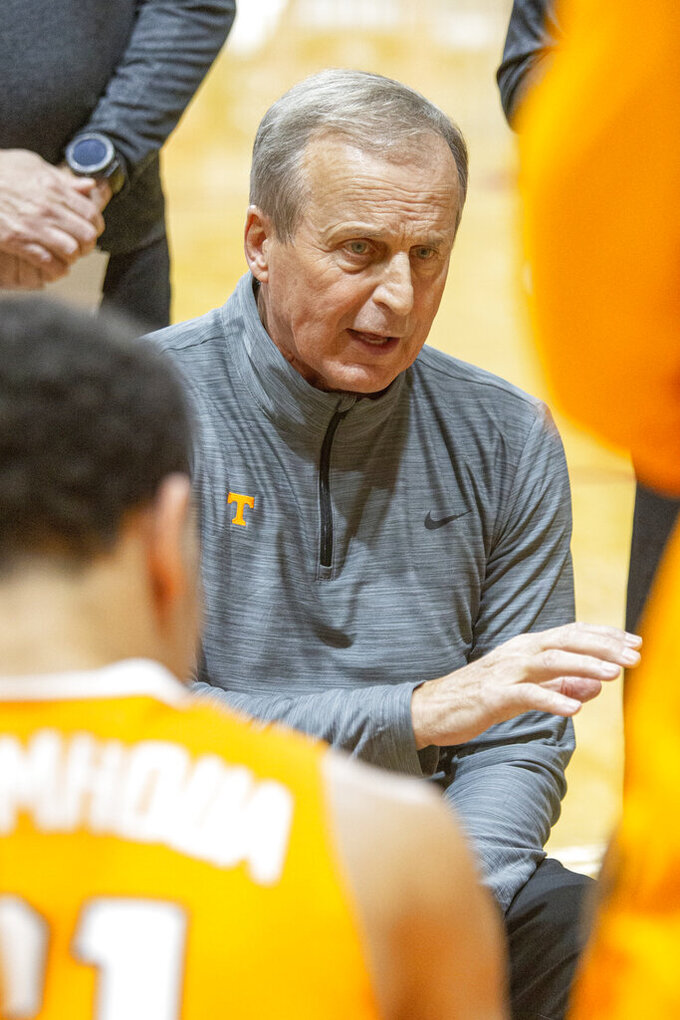 Tennessee head coach Rick Barnes directs his team during a time out in the first half ball game of an NCAA college basketball game against Virginia Commonwealth at the Emerald Coast Classic in Niceville, Fla., Saturday, Nov. 30, 2019. (AP Photo/Mark Wallheiser)

NICEVILLE, Fla. (AP) — Tennessee coach Rick Barnes saved a timeout in the waning seconds against VCU, allowing the Volunteers to get to the frontcourt and inbound the ball with 1.7 seconds remaining in a tie game. And he knew he had a player he could count on in that situation.

Lamonte Turner hit a 3-pointer at the buzzer from the right corner, giving the 17th-ranked Volunteers a 72-69 victory over No. 20 VCU in the Emerald Coast Classic third-place game on Saturday.

"He's got a feel for it," Barnes said. "He's competitive. That's what we always thought his biggest talent is. He's competitive, spirited, and he's not afraid to make the play in that kind of situation. There's no doubt that in late-game situations, it's not as much about plays as it is about players."

VCU’s De’Riante Jenkins hit a 3-pointer with 5 seconds left to tie the game at 69-all. After the timeout, the Vols’ point guard took a pass from James Joshua-Jordan and got the shot off as the clock ran out.

"I leaned back so I could see the rim," Turner said. "I knew it was good the second it left my hand."

Turner’s shot spoiled a dramatic comeback by the Rams (6-2), who trailed by as many as 13 points in the second half.

Marcus Santos-Silva led VCU with 22 points and Jenkins had 15.

Fulkerson put Tennessee ahead 69-66 by blocking a shot, grabbing a rebound and then hitting a pair of free throws after he was fouled, setting up the clutch 3-pointers in the final seconds.

Tennessee: The Vols bounced back from their loss to Florida State in the Emerald Coast Classic semifinals on Friday. Although Tennessee never led in that game, the Vols narrowed the final margin to three points against a Florida State team was just a few votes short of making the AP Top 25. The road doesn't get any easier, though. After a home game against Florida A&M, the Vols entertain No. 16 Memphis. The schedule also includes a visit to Cincinnati and a home game against Wisconsin, both currently unranked but in the next tier of teams, before Southeast Conference play begins in January.

VCU: It was a tough couple days in the Florida Panhandle for the Rams, who saw their season-opening six game winning streak — the best start in school history — turn into a two-game skid. The losses to Purdue and No. 17 Tennessee likely will lead to VCU’s exit from the AP Top 25. The schedule, though, gets easier with no more Power 5 opponents ahead.

LOOKING ON THE BRGHT SIDE

VCU coach Mike Rhoades was pleased with the way his team played.

"I thought our guys were moving the ball better," Rhoades said. "We scored 43 points in the second half against a very good team because we played with flow and had transition baskets. I thought we played really well inside-out and guys were really keeping the ball hot. It just shows when we play that way, we can score."

Three of the four top-tier teams in this year's Emerald Coast Classic will participate in another holiday tournament next November. Tennessee, Florida State and VCU will be part of an eight-team field in the Charleston Classic in South Carolina next year. Oklahoma State, Penn State, Houston, Seaton Hall and the College of Charleston round out the field. Purdue, meanwhile, will play in the 2020 Cancun Challenge against Clemson, Mississippi State and Illinois State.