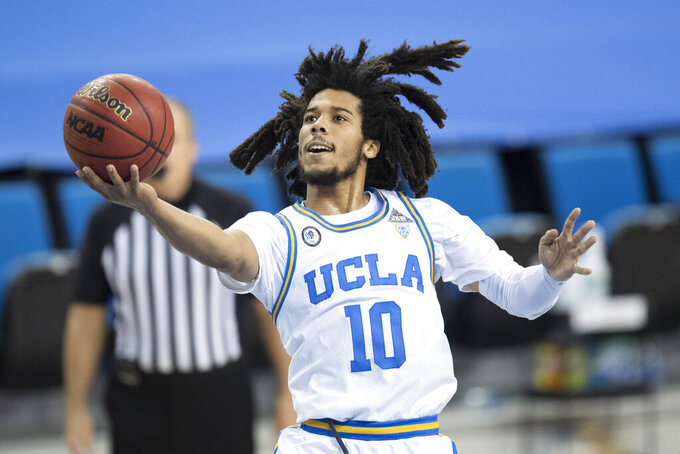 UCLA guard Tyger Campbell goes up for a basket during the second half of an NCAA college basketball game against California, Sunday, Dec. 6, 2020, in Los Angeles. (AP Photo/Kyusung Gong) 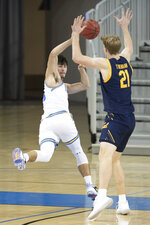 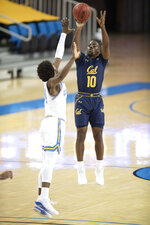 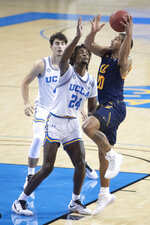 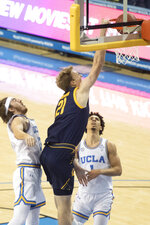 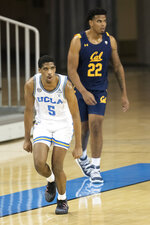 LOS ANGELES (AP) — Tyger Campbell made his UCLA teammates look good, and in the process was nearly perfect himself.

Chris Smith scored 21 points and the Bruins led most of the way to beat California 76-56 on Sunday in their earliest Pac-12 opener in modern school history.

Campbell had 11 points and 12 assists to go with one turnover in 29 minutes. His only mistake was an errant pass.

“I wasn’t worried about a perfect game,” he said. “I was just mad at myself for that pass.”

Campbell found Smith and the rest of the Bruins in all the right places.

“I always get to the right spot because he always has his head up and I know he’s going to see me," Smith said. “He played amazing and I was just enjoying watching it the whole time.”

Campbell set up Jalen Hill for three dunks off alley-oop passes in the second half.

“He just set really good screens for me and he rolled hard,” Campbell said of Hill. “I just know when I throw it to the basket, he’s either going to go up and get fouled or dunk.”

Jaime Jaquez Jr. added 12 points and six rebounds, with all but one of the Bruins’ nine players scoring. Smith, the team’s only senior, was coming off a six-point effort in a win over Seattle after double-figure scoring in the first two games of the season.

“A big point of emphasis was not to come out and start slow like we did in the first three games,” Smith said. “We came out and hit them in the mouth.”

Makale Foreman scored 14 points to lead the Golden Bears (2-3, 0-2). He arrived in Los Angeles earlier in the day after initially not being allowed to travel with the team a day earlier because of what coach Mark Fox described as “a hiccup in the testing process.”

Cal never cut its deficit to single-digits in the second half, when it got outscored 36-34, despite improved shooting.

Hill finished with 10 points and seven rebounds. Jaquez fed Smith an alley-oop pass for a big dunk that extended UCLA's lead to 64-47.

The Bruins raced to a 31-11 lead, including 15 straight points to cap the spurt. Smith scored eight of their first 12 points, hitting two 3-pointers.

“We just didn’t play well out of the gate,” Fox said. “We were a step behind every play. Our defense was nowhere near where we wanted it to be. Offensively, we didn’t play with any authority.”

David Singleton's 3-pointer extended UCLA's lead to 40-22 at the break. The Bruins shot 70% from the floor, owned a 15-7 edge in defensive rebounding, and outscored the Bears 14-6 in the paint.

Cal big man Grant Anticevich was saddled with three fouls in the half, when the Bears were held to 38% field-goal shooting.

California: The Bears are looking to continue their upswing under second-year Fox after going 7-11 in Pac-12 play last season, four more wins than they had in 2018-19. They're set to play 15 games away from home, most among league teams.

UCLA: The Bruins have won three in a row since a season-opening loss at San Diego State that helped knock them out of the Top 25. They return to non-conference play for the next couple weeks, and games against Marquette and No. 20 Kentucky loom. The Golden Eagles aren't ranked, but they upset No. 4 Wisconsin.

Foreman also didn't attend shootaround earlier in the day. He took a hard fall in the game's final minutes, but Fox said he thought Foreman would be fine. Fox said another player, who was not identified, also wasn't allowed to travel with the team on Saturday and didn't participate in shootaround.

Bill Walton’s presence was felt in Pauley Pavilion. The Hall of Famer worked the game as an analyst for the Pac-12 Network from his position high above the action instead of courtside. He spoke from behind a mask. Walton’s cardboard cutout -- wearing a tie-dyed green T-shirt -- rested next to former teammate Kareem Abdul-Jabbar in the front row behind the basket. The duo’s retired jerseys are next to each other in the rafters, too.

The Bruins have won seven straight over the Bears and nine in a row at Pauley. The teams met just once last season, a 50-40 victory by UCLA. They’ll play again at Cal on Jan. 21.

California: The Bears remain in Southern California to visit Pepperdine on Wednesday.