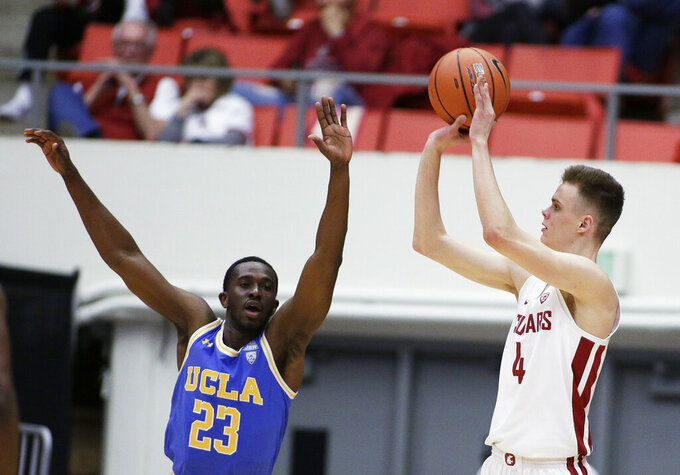 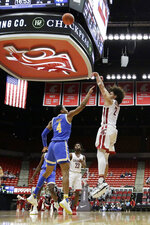 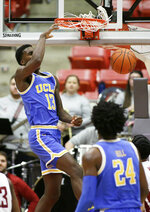 "It's always encouraging when we have got five guys in double figures," UCLA coach Murry Bartow said. "So that means we are spreading it around and moving the ball. Washington State plays multiple zone defenses, so I thought we did a pretty nice job adjusting and figuring out what they were in."

UCLA went on a 13-3 run, taking its first lead of the opening half at the 8:34 mark on a layup from Hands. Ali set the pace for UCLA in the first half, scoring 10 points with two big 3-pointers. One 3 came during the run and another before the halftime buzzer, giving the Bruins a 44-37 halftime lead.

Franks kept it close for the Cougars with 15 first-half points, going 6 of 8 from the field and 3 of 4 from 3-point range. He only had six points in the second half.

UCLA created some distance in the second half with a 13-2 run over 4:33, led by Wilkes and Brown. Wilkes nailed a 3-pointer and had an acrobatic layup while Brown had two powerful dunks, one off an alley-oop pass from Hands giving UCLA a 62-49 lead.

"Once the game got away, I thought we had some mental breakdowns defensively and that athleticism is hard to guard when you think you are just going to out-athlete people," Washington State coach Ernie Kent said.

The Bruins went on a 14-3 run with easy layups and free throws for a 76-55 lead with 7:58 remaining and cruised from there. UCLA finished shooting 59 percent from the field.

"It's hard to win on the road," Bartow said. "To come into Pullman and win by 20, we'll take it. We did not underestimate this team."

UCLA: The Bruins have won two games in a row with the conference race heating up. This win gives UCLA a step forward for a higher seed come conference tournament time.

Washington State: The Cougars are on a four-game losing streak after the win against California.

UCLA: The Bruins will finish their road trip at Washington on Saturday.

Washington State: The Cougars will host USC on Saturday.