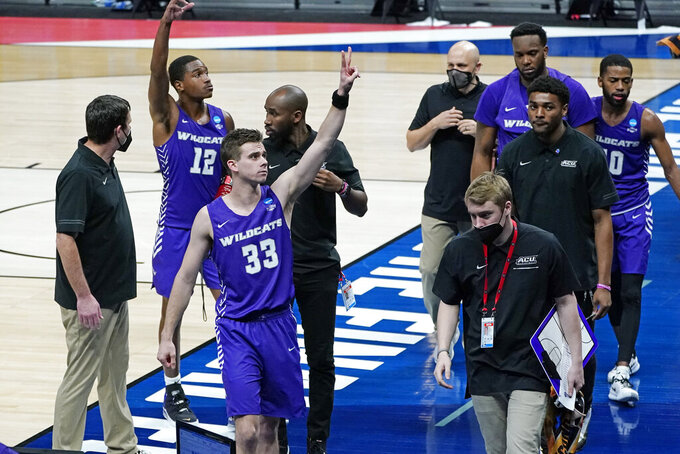 Abilene Christian's Mahki Morris (12) and Paul Hiepler (33) wave to fans as they leave the court after their 67-47 loss to UCLA in a college basketball game in the second round of the NCAA tournament at Bankers Life Fieldhouse in Indianapolis Monday, March 22, 2021. (AP Photo/Mark Humphrey)

INDIANAPOLIS (AP) — UCLA stumbled into the NCAA Tournament on a four-game losing streak, barely making the field of 68, and fell behind by 14 points to Michigan State in the First Four.

After all that, the Bruins are rolling into the Sweet 16 — a little weary but still dancing.

Johnny Juzang scored 17 points and 11th-seeded UCLA carefully brushed off pesky Abilene Christian 67-47 Monday to become the fifth team to go from First Four to the round of 16.

The Bruins (20-9) will play Alabama, the second seed in the East Region, in their first regional semifinal appearance since 2017 — and their first with second-year coach Mick Cronin.

After the buzzer sounded, the Bruins gathered in a messy circle near their bench and broke out in something that looked like a combination jig and shuffle. It didn't last long after three games in five days.

“I think they’re tired,” Cronin said. “My message has been since we beat Michigan State, I didn’t come to Westwood to win a game or two.

“Yeah, I want you to enjoy it, it’s great. But that's not our purpose.”

UCLA, owner of 11 NCAA titles, started its tournament Thursday by rallying to win in overtime and is now the first team to rise from First Four to second weekend since Syracuse in 2018.

VCU in 2011 is the only First Four team to advance past the regional semifinals, when the Rams went to the Final Four.

The Bruins were far from spectacular, but their size and athleticism combined with solid execution on both ends were more than enough to keep the 14th-seeded Wildcats from springing another upset.

Abilene Christian (24-5) pulled off one of the most surprising victories in a tournament filled with them, beating third-seeded Texas for the school's first Division I NCAA victory Saturday.

ACU’s pressure defense and undersized guards caused all kinds of problems for Texas. The No. 1 defense in the country at causing turnovers forced the Longhorns into 23.

Cronin said he was worried about the Wildcats' ball-hawking D, but UCLA had no such issues, committing just eight turnovers.

"My message was the better defensive team will win this game, and just continue to focus and worry about defense," said Cronin, who brought a fierce and physical style of play from Cincinnati to UCLA. “We’ve embraced that since the halftime of the Michigan State game.”

The Bruins used an 18-0 run in the middle of the first half to build a 14-point lead on ACU. Jake Kyman had a couple of 3s and mid-range jumper to fuel the surge.

We knew that they were going to be scrambling and playing chaotic and trying to get us to speed up," UCLA's Cody Riley said. “Going into the game we just knew that we couldn’t let them do that.”

Abilene Christian beat Texas shooting just 30.1% from the field and scoring 53 points, but the cold-shooting continued against UCLA. Without the extra possessions, the Wildcats couldn't keep up with the Bruins while shooting 29.8%.

"Give them credit; they had a game plan," aid ACU’s Reggie Miller, who had eight rebounds and seven assists. “They spaced us out, made it really difficult for us to help with them being excellent shooters.”

ACU went nine minutes in the first half without scoring but managed to hang around because the Bruins followed up their big run with a five-minute drought of their own.

UCLA started the second half with a 14-1 run, with Juzang knocking down a 3 and Riley (12 points and 12 rebounds) slamming home an alley-oop, and the Bruins cruised from there.

Abilene Christian: The Southland Conference champions were trying to become the third No. 14 seed to reach the Sweet 16. The last was Chattanooga in 1997.

“They’re going to be celebrated like no team has ever been celebrated at Abilene Christian,” Golding said.

Mahki Morris led the Wildcats with 14 points, all the second half.

UCLA: That four-game losing streak isn't looking so bad right now. The losses all came by single-digits against teams that have won games in the NCAA Tournament — Colorado, Oregon, USC and Oregon State.

“So we still had our confidence, and we knew that things were going to start turning our way once we got out here for March Madness,” Riley said. "I think it shows the resilience of the group, the togetherness."

This was the sixth matchup of an 11 seed against a 14 seed in NCAA Tournament history. The 11s are now 6-0.

The Bruins will look to win a regional semifinal for the first time since 2008.