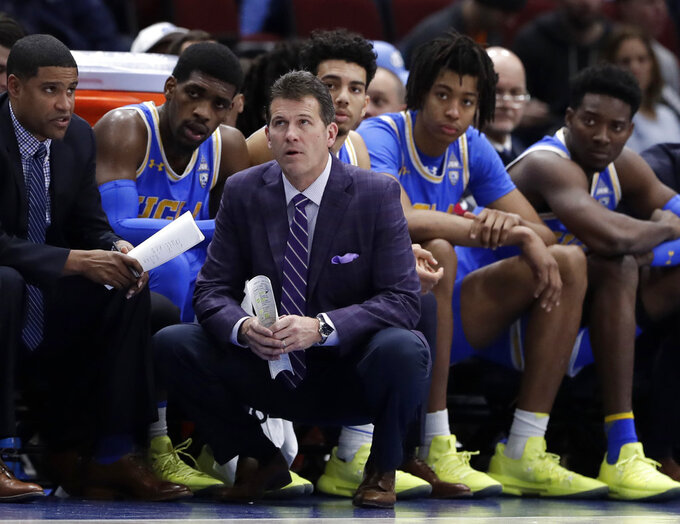 File-This Dec. 22, 2018, file photo shows UCLA head coach Steve Alford and his players watching during the second half of an NCAA college basketball game against Ohio State, in the fifth annual CBS Sports Classic, in Chicago. Alford has been fired as UCLA basketball coach after six seasons, with the Bruins mired in a four-game skid that included losses at home to Belmont and Liberty. Athletic director Dan Guerrero said Monday, Dec. 31, 2018, that assistant Murry Bartow will serve as interim coach through the end of the season. (AP Photo/Nam Y. Huh, File)

LOS ANGELES (AP) — Steve Alford was fired as UCLA basketball coach in his sixth season on Monday, with the Bruins mired in a four-game skid that included losses at home to Belmont and Liberty.

Athletic director Dan Guerrero said assistant Murry Bartow will serve as interim coach through the end of the season.

UCLA is 7-6 and in danger of missing the NCAA Tournament despite a talented roster that includes sophomore Kris Wilkes and freshman Moses Brown.

Alford's final game was a 73-58 loss to Liberty on Saturday, the worst home defeat in his tenure. The Bruins committed 24 turnovers and missed a season-high 22 3-pointers. Alford called it the most disappointing loss in his 28-year coaching career.

It's unusual for UCLA to fire a coach in the middle of the season, but with the Bruins set to open Pac-12 play Thursday against Stanford at home, Guerrero is clearly hoping it spurs a turnaround.

"While Steve led us to three Sweet 16 appearances, we simply have not been performing at a consistent level and our struggles up to this point in the season do not bode well for the future," Guerrero said in a statement.

Bartow has previous head coaching experience, having spent six seasons at Alabama-Birmingham from 1996-2002. He had a 103-83 record with one NCAA Tournament appearance. He also ran programs at East Tennessee State and South Florida.

Bartow, 57, was in the midst of his first season as Alford's assistant.

His late father, Gene, had the unenviable task of succeeding John Wooden at UCLA. The elder Bartow had a 52-9 record from 1975-77, including a Final Four appearance in 1976. He left to start the athletic program at UAB.

Alford's troubles had been mounting since the season began.

On Dec. 15, the Bruins lost to mid-major Belmont at Pauley Pavilion.

Four days after that, UCLA lost by 29 points at Cincinnati. The current skid, in which the Bruins have lost by an average of 15 points, is the longest since the end of the 2015-16 season and the first time the Bruins have dropped four straight nonconference games since 2010-11.

Alford had a 124-63 record in Westwood after taking over the program in March 2013. The 54-year-old coach won one Pac-12 tournament title but never a regular-season league title, and made four NCAA Tournament appearances, including Sweet 16 berths in his first two years.

But the drop-off was swift for a school that owns a record 11 national championships. The Bruins lost to St. Bonaventure in the First Four last season, the first time in school history that UCLA was relegated to a play-in game.

They failed to make the NCAA Tournament in 2015-16, when the team went 15-17 for the program's fourth losing record since 1948 when Wooden became coach.

"I'm extremely appreciative to everybody at UCLA for what has been a tremendous run and the chance to work with such special student-athletes and coaches," Alford said in a statement issued by the school. "While I wish we could have had more success, my family and I are so grateful for our time in Westwood. We wish this program nothing but the best. I sincerely hope that the UCLA community will rally around this team, its players and the coaching staff as Pac-12 play begins."

While critics believe UCLA underperformed during Alford's tenure, talent was never the issue.

He was a solid recruiter, bringing in highly regarded classes in recent years. But as with many programs, several players stayed just one season in Westwood before leaving for the NBA, including current Lakers guard Lonzo Ball and the Indiana Pacers' TJ Leaf.

In March 2013, Alford signed an $18.2 million, seven-year contract to coach the Bruins, replacing the fired Ben Howland. Alford's decision to take the UCLA job came just three days after he had signed a 10-year extension at New Mexico.

Alford wasn't a popular hire among UCLA supporters, who didn't think he was an upgrade from Howland, who took the Bruins to three Final Four appearances. They wanted a bigger name. Boosters targeted Alford in subsequent seasons, with planes carrying banners that urged his firing flying over campus and petitions circulated online urging his ouster.

Alford wrote an open letter of apology to Bruins fans and returned a one-year contract extension signed after his first season.

During his introductory news conference at UCLA, Alford was asked about his handling of Pierre Pierce when he coached at Iowa. Pierce was charged with raping a female Iowa athlete during the 2001-02 season and Alford staunchly defended him. Pierre later pleaded guilty to a lesser charge and was suspended from the team.

Alford said he "did everything he was told to do" in response to the news conference question. Two weeks after being hired at UCLA, he apologized for declaring Pierce's innocence before legal proceedings played out.

Last season at UCLA began with a scandal in China, where players LiAngelo Ball, Cody Riley and Jalen Hill were accused of shoplifting during the team's season-opening trip. All three were suspended. Ball left school and the others sat out the rest of the season before returning without incident this season.

Alford kept his family close during his years in Westwood.

His oldest son, Kory, is in his second season as UCLA's video and analytics coordinator.

Alford's other son, Bryce, followed his father to UCLA from New Mexico. Skeptics accused Alford of nepotism when Bryce was groomed as the backup point guard over Zach LaVine, who now plays for the Chicago Bulls.

Bryce Alford left UCLA as the school's leading career 3-point shooter and was a first-team All-Pac-12 selection as a senior. He currently plays in the NBA's G League.

Alford was a high school and college star in his native Indiana, where he played for Bob Knight and won the 1987 national championship.

After playing four years in the NBA, he embarked on a coaching career. He began at Manchester University in Indiana, and went on to Missouri State, Iowa and New Mexico.