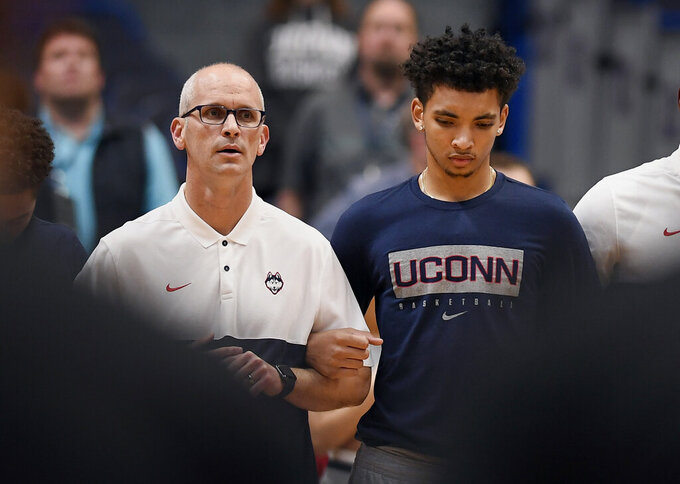 HARTFORD, Conn. (AP) — UConn freshman forward Richie Springs will sit out this season after being declared academically ineligible by the NCAA.

Springs is a 6-foot-9 power forward from Brooklyn. He graduated this spring from the MacDuffie School in Granby, Massachusetts.

The 18-year-old made the decision in August to forgo his planned postgraduate year and enroll at UConn this fall. But coach Dan Hurley said Wednesday that Springs will be an academic redshirt after being declared a non-qualifier by the NCAA clearinghouse.

"We lose a third-string center and a guy who maybe would have tried to push Sid (Wilson) for some minutes at the four," Hurley said. "Richie was a big-time future investment for us and Richie is going to be a big-time player."

He joined a class that included guard James Bouknight, who played with Springs at MacDuffie. Bouknight's status with the team is in question following his arrest earlier this month after fleeing from police at the scene of a one-car crash near campus.

Other freshmen include guard Jalen Gaffney and forward Akok Akok, who enrolled in January, but did not play last season.

The announcement was made prior to the team's 103-64 exhibition win Wednesday against Division II St. Michael's of Vermont. The Huskies open the regular season on Nov. 8 against in-state rival Sacred Heart.