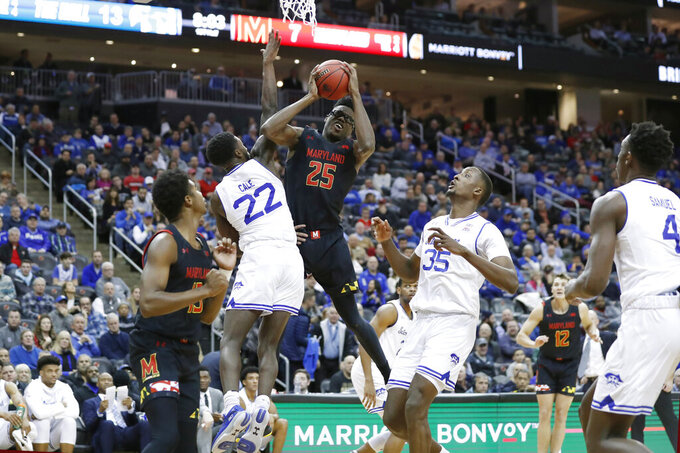 NEWARK, N.J. (AP) — Coming off an embarrassing loss to Rutgers and missing its two best players against No. 7 Maryland, Seton Hall turned to Quincy McKnight and a stifling defense to revive a once hopeful season that was fading quickly.

“Today we proved to everyone we can still play and we got a good win," said McKnight, who added eight rebounds, six assists and two steals. “This is a confidence booster to everyone on the court today.”

The Pirates (7-4) held the Terrapins to 27% shooting, blocked 15 shots and forced 17 turnovers in ending a two-game losing streak and handing Maryland (10-2) its second straight loss.

“This was a big program win for us," said forward Jared Rhoden, who had eight points and 12 rebounds. “That's all coach (Kevin Willard) kept reiterating to us at practice all week, that we lost two of our star players and guys had to step up. It was a collective win. We all stepped up.”

Seton Hall seemed in control when Anthony Nelson hit a layup for a 49-42 edge with about a minute to play. Then the Pirates missed three free throws and turned the ball over, setting up Anthony Cowan Jr. to try a tying 3-pointer with 22 seconds left.

Cowan missed, and Seton Hall got the rebound and made a free throw to ice it.

“That said, we had the ball down three on the road and had a chance," Turgeon said “The world is not coming to an end, but we are highly disappointed as a coaching staff and as a team. Sometimes you have to hit rock bottom. I don't know if it is rock bottom. We'll see. If it is, hopefully we'll come back and get better."

The defense was the difference for Seton Hall.

The Terrapins trailed 27-18 at halftime with their lowest scoring output in a first half this season. Maryland entered averaging 77.1 points per game.

“We're not playing with a lot of confidence now," Turgeon said. “I have to figure out ways to give our guys confidence because we don't look like the same team we were three weeks ago.”

Maryland: The Terps are going to slip in the polls and won't play again for 10 days.

Seton Hall: The Pirates were coming off losses to Iowa State and Rutgers but got a good win without possibly their two best players. Seton Hall finally beat a ranked foe after near-wins against then-No. 3 Michigan State (lost 76-73) and then-No. 11 Oregon (71-69).