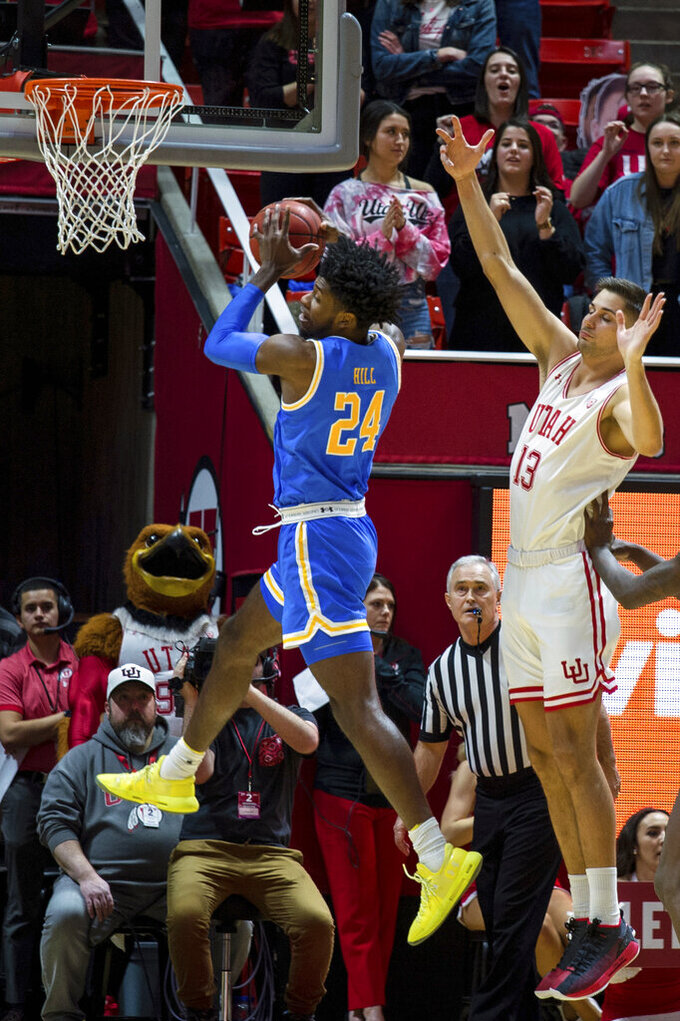 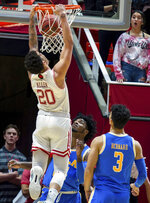 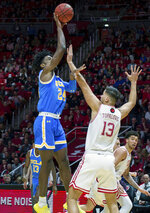 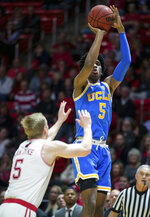 SALT LAKE CITY (AP) — Utah's evolution into one of the most dangerous teams from the perimeter in the Pac-12 paid huge dividends in the team's regular-season finale.

The Utes overwhelmed UCLA by knocking down one 3-pointer after another on their way to beating the Bruins 92-81 on Saturday. Utah shot 45 percent from the perimeter overall and made 17 3-pointers to clinch a third-place Pac-12 finish.

UCLA alternated between a 2-3 zone and a 3-2 zone in the first half and switched to man-to-man defense in the second half. The Bruins couldn't do enough to slow the Utes down and trailed by as many as 27 points before halftime.

Utah broke the zone by being patient in working for the right shots.

"The worst thing we could have done is just move the ball around the perimeter," guard Sedrick Barefield said. "We did a good job of getting the ball in the middle and just working from there."

"I wish we had more than nine conference wins, but I'm proud of the nine we've got," interim coach Murray Bartow said. "They battled. We just got way too far down on the road. When you're 20 down, it's hard to come back."

The Utes sank 11 of 20 from outside in the first half alone. On the other end, the Bruins missed all seven attempts from 3-point range before halftime.

Barefield made three 3-pointers and Van Dyke added another to help the Utes carve out a 19-6 lead only five minutes into the game.

UCLA cut the deficit to single digits three times, the final time when Bernard's layup trimmed Utah's lead to 28-20. That's as close as the Bruins would get in the first half.

Utah ripped off a 23-4 run to take a 51-24 lead with 2:54 left before halftime. Tillman capped the decisive spurt with back-to-back 3-pointers. The Utes scored six straight baskets to finish off the run, with Tillman accounting for four of the six.

"We played the game the right way," Utah coach Larry Krystkowiak said. "It was incredible - the assist-to-turnover ratio at halftime. Guys shared the ball. We got out in transition. I thought our defense fueled us."

The Bruins outscored Utah 22-6 over a six-minute stretch spanning both halves and cut the deficit to 57-46 on a 3-pointer from Wilkes. Riley Battin hit a pair of corner 3s and Barefield also scored a pair of baskets to finally halt the run and boost Utah's lead to 69-49.

UCLA strung together one more rally. The Bruins hit three straight baskets, the last a 3-pointer from Singleton, to cut the deficit to 75-67. UCLA would not get any closer and the Utes put it away when Barefield and Van Dyke hit back-to-back 3-pointers to give Utah a 91-76 lead with 58.1 seconds left.

"At halftime, we talked about how we had been in that position, but on the other side, the last time we played them," Van Dyke said. "We just were determined to not let them do what we did to them."

Freshman center Moses Brown did not play for UCLA after committing an unspecified violation of the school's student-athlete code of conduct. Brown entered the game as the Bruins' leading rebounder and shot blocker. He is averaging 8.5 rebounds and 2.0 blocks to go with 10.2 points per game. His status for the Pac-12 Tournament is undetermined.

Utah climbed to a huge lead before halftime, in part, because the team did an excellent job sharing the ball and playing mistake free. The Utes had 13 assists on 17 baskets and committed just two turnovers. It marked the second straight game where the Utes started strong in the first half and they improved 14-0 when leading at halftime this season.

UCLA: An inability to run Utah off the 3-point line in the first half assured the Bruins trailed for the final 39 minutes of the contest and ended the regular season with back-to-back losses.

Utah: The Utes swept the season series with UCLA and clinched the third seed in the Pac-12 Tournament. It gives Utah a valuable bye into the quarterfinal round on Thursday.

UCLA: The Bruins will play in the first round of the Pac-12 Tournament on Wednesday.

Utah: The Utes will play in the quarterfinal round of the Pac-12 Tournament on Thursday.