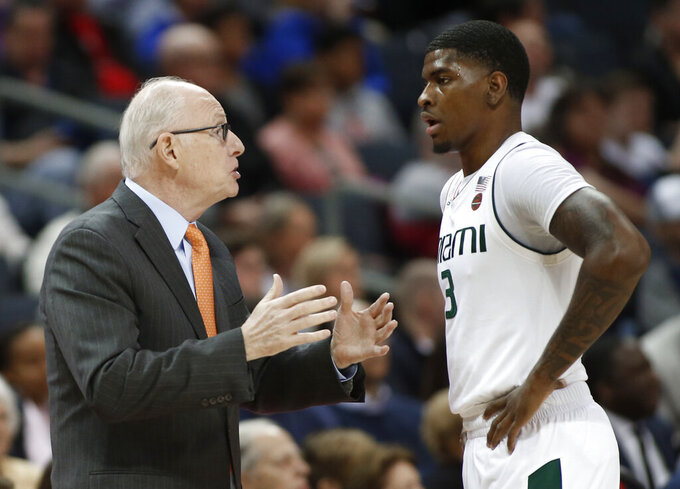 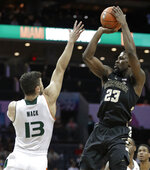 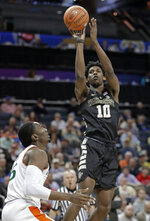 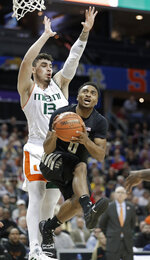 CHARLOTTE, N.C. (AP) — After foot surgery last year, Miami shooting guard DJ Vasiljevic decided to change his diet to lessen wear and tear on his body and help him become a more versatile and athletic player.

The junior from Australia lost 25 pounds and trimmed 10 percent body fat — changes that seemed to pay off in the first round of the ACC Tournament.

Normally known for his 3-point shooting, Vasiljevic scored 21 points and grabbed six rebounds, Anthony Lawrence added 20 points and 10 rebounds and Miami defeated Wake Forest 79-71 on Tuesday to move on to the second round.

"I wanted to become more versatile and be able to put the ball on the deck and finish at the rim and create for others," said Vasiljevic, who had four 3-pointers but found success driving to the basket while also finishing on a backdoor alley-oop pass.

"In his mind he is so good at that one thing (shooting) that he looks for it all of the time," Larranaga said. "But I have encouraged him to utilize his all-around game because he's always been able to do that."

The loss leaves more questions about the future of coach Danny Manning, who is 65-93 in five seasons at Wake Forest with only one NCAA Tournament appearance.

Manning said after the game he "hopes" to be back.

"I feel I'll be back," Manning said. "I look at the score sheet and everyone that scored is an underclassman. We had some guys that grew a significant amount this year in terms of their growth from the start to the finish, and that's how we want to build it. We build it with our young guys, and we had a really good freshman class come in and got a lot of key contributions from a lot of guys throughout the course of the season."

Brandon Childress and Jaylen Hoard each had 16 points for Wake Forest (11-20), which lost four straight games to end the season.

In the previous loss to Wake Forest, Miami surrendered a 10-point lead with less than two minutes to play. Wake Forest again threatened to erase a double-digit lead by trimming the deficit to four with one minute remaining. However, the Demon Deacons missed three shots on one possession with a chance to cut the lead to two and the Hurricanes scored on a run-out layup by Lykes to help seal the win.

Miami had built a 34-31 halftime lead behind 12 points from Vasiljevic, who closed out the half with a long-range bomb at the buzzer to give the Hurricanes the lead. Miami stretched the lead to double digits with a 12-2 run early in the second half behind a steal and one-handed jam by Zach Johnson and a 3-pointer from Lykes.

Wake Forest's Hoard said it has been a tough season because the young Deacons have played so hard but have continuously struggled with consistency.

"It's happened like multiple times this year, and it's frustrating because we fight hard out there on the court but can't seem to put like 40 minutes together," Hoard said. "So it was frustrating."

Wake Forest: Three of the Deacons top five scorers this season are freshmen, including Hoard, who came in averaging 13 points per game. That's why Manning is excited about the future of the program.

Miami: The Hurricanes got a nice game from Lawrence, who was aggressive on drives from the foul line, easily shooting over smaller opponents.

Miami: Advances to face No. 16 Virginia Tech, the tournament's fifth seed, on Wednesday.