Vols' Nkamhoua to have ankle surgery, likely out for season 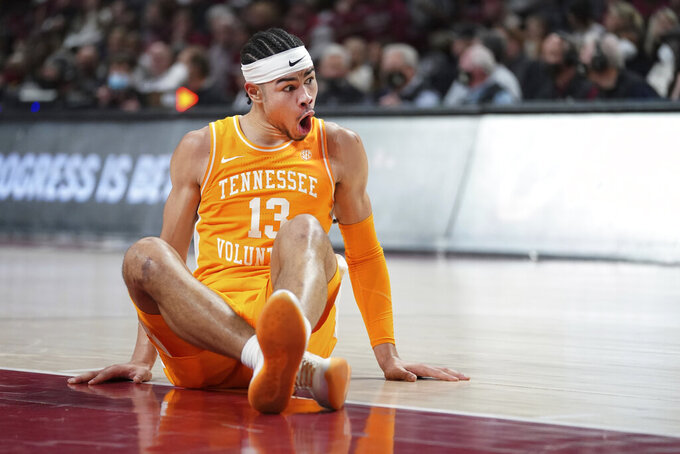 KNOXVILLE, Tenn. (AP) — Tennessee starting forward Olivier Nkamhoua will have surgery on his left ankle that is expected to sideline him for the remainder of the season.

“It’s sad for all of us," Tennessee coach Rick Barnes said of losing Nkamhoua. “He’s become such a huge part of our program and for this team. You could see the strides he was making every game. He was getting more comfortable about who he is as a player and what he needed to do for our team.”

The junior had been tied with Josiah-Jordan James as Tennessee's top rebounder, but he went down in the second half of last weekend's 81-57 win at South Carolina. He went to the locker room and returned with his ankle taped.

Nkamhoua's injury was re-evaluated after the Vols returned to Tennessee. The 6-foot-8 forward from Helsinki, Finland, was the Vols' third-leading scorer averaging 8.6 points a game, and he averaged 5.6 rebounds a game.

Tennessee (16-6) moved up three spots to No. 19 in Monday's AP Top 25. The Vols have won four of their last five. Barnes said someone else will have to step up to replace someone who started all 22 games and played 21.5 minutes per game.

“Whoever gets those minutes will be the defensive players,” Barnes said. "We could swing Josiah to that spot, but it’s going to be a great opportunity for some guys, and we’ll see who will be able to capture that and go for it.”