Wade is perfect as Kansas St. shoots past Oklahoma St. 75-57 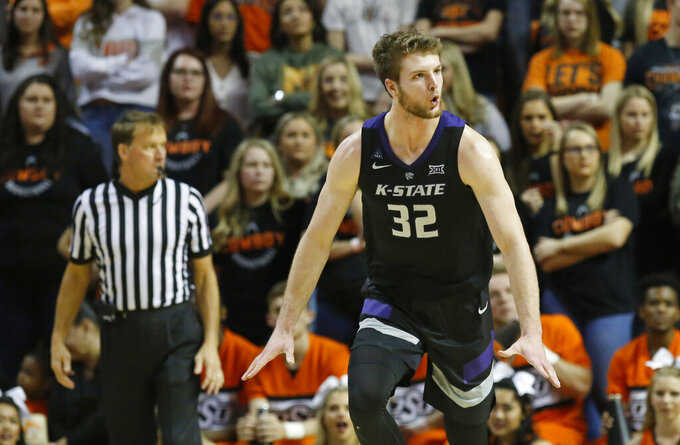 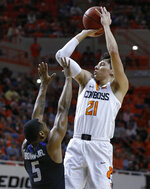 "Honestly, I had no idea," Wade said. "I didn't really know until the very end, when coach Lowery said something to me about, 'Oh, you just don't want to shoot, don't want to mess up your percentage.' I was like, 'What are you talking about?'"

Wade scored a season-high 24 points on 9 of 9 shooting to help Kansas State defeat Oklahoma State 75-57 on Saturday night. It was just the seventh time in school history that a Kansas State player had a perfect shooting night with at least nine attempts. He also made three 3-pointers.

Barry Brown scored 18 points and Cartier Diarra added 10 for the Wildcats (16-5, 6-2 Big 12), who entered the night tied for the conference lead.

The Wildcats were ranked seventh out of 10 Big 12 teams in 3-point percentage during league games and 10th in all games before Saturday. They made 16 against Oklahoma State, the most in school history for a conference game and the second-most overall.

"I've said all among we could be a good shooting team," Kansas State coach Bruce Weber said. "We should be. The ball movement was really spectacular. Kind of what we'd hoped all year."

In a building where Oklahoma State has pulled numerous upsets the past two seasons, the Wildcats were unusually comfortable.

"I think a lot of the credit has to go to the coaching staff," Wade said. "The scouts — they put so much time into the scouts, and it gives us just a great base of how we're going to play. We went out tonight and executed."

Oklahoma State hung tough for a while, but a putback dunk by Kansas State's Makol Mawien put the Wildcats ahead by 13 late in the first half. Brown hit a 3-pointer at the halftime buzzer to give Kansas State 43-27 advantage. Kansas State shot 61.5 percent before the break.

Oklahoma State didn't score for more than six minutes to start the second half as Kansas State pulled away. The Wildcats led by 34 at one point, and Oklahoma State went on a 13-0 scoring run late in the game to make the game seem closer.

"They shot the ball better than what they have all season, and a team that's that good defensively shooting the ball that well offensively — you're in for a tough game then," Oklahoma State guard Thomas Dziagwa said.

Kansas State: The Wildcats won their sixth straight conference game, and their fourth straight by double digits. Other than a loss to Texas A&M in the SEC/Big 12 challenge, the Wildcats have been dominant lately and could make their way into the Top 25.

Oklahoma State: The Cowboys were scrappy for a while, but they were simply overmatched. It was Oklahoma State's fourth straight conference loss. The long-term effects of four players leaving the program or being kicked off the team this season are taking effect.

Wade has rounded into form since returning from a foot injury. He scored just two points in his first game back, but has been on a tear since then. In his past five games, he's averaging 18 points on 58 percent shooting, including 53 percent from 3-point range.

Oklahoma State made just two of nine free throws, making just one in each half. Kansas State made 7 of 12.

Oklahoma State forward Cameron McGriff: "It's a bad loss. It's just one loss."