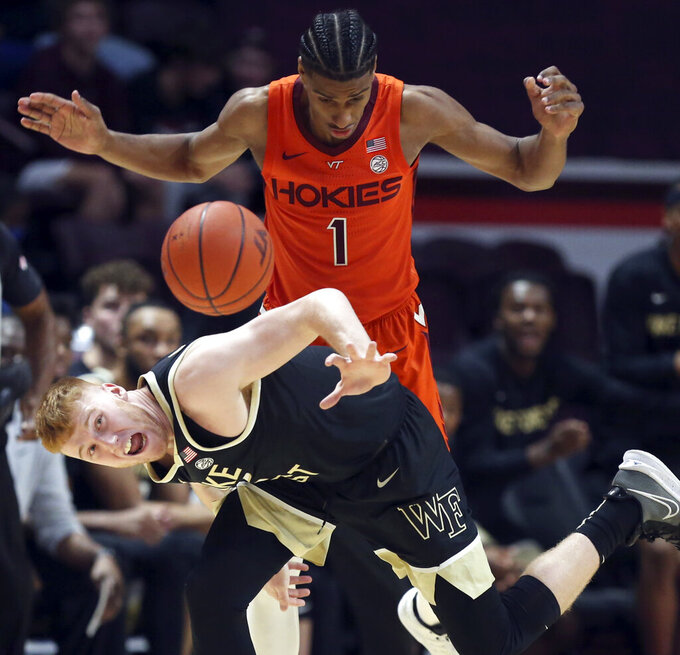 Cameron Hildreth (2) of Wake Forest intercepts a pass intended for Virginia Tech's David N'Guessan (1) for a turnover in the first half of an NCAA college basketball game in Blacksburg, Va. Saturday, Dec. 4 2021. (Matt Gentry/The Roanoke Times via AP) 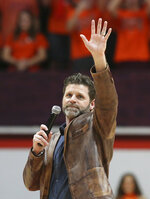 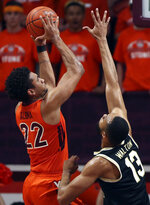 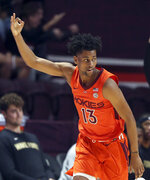 BLACKSBURG, Va. (AP) — Daivien Williamson tossed in 19 points and Dallas Walton scored 17 as Wake Forest pulled away in the second half to beat Virginia Tech 80-61 in an Atlantic Coast Conference opener on Saturday.

Williamson scored 11 points in the second half to help the Demon Deacons (8-1) turn a 38-34 lead at intermission into a rout. Williamson sank 8 of 14 shots, including 3 of 6 from behind the 3-point line, as Wake Forest shot 63% from the floor and 44% from distance (7 of 16). Walton knocked down 7 of 10 shots against Virginia Tech's stout defense. The Hokies came in yielding just 53.4 points per game — second best in the nation.

Keve Aluma paced Virginia Tech (6-3) with 23 points, nine rebounds and five assists. He scored just five points in the second half. Justyn Mutts added 15 points. Aluma and Mutts — the Hokies' only two players averaging in double figures — combined to make 15 of 26 shots from the floor. The rest of the Hokies sank only 8 of 30 shots (27%).

Wake Forest outscored Virginia Tech 48-28 in the paint. The Hokies lost for the first time in their last five ACC home openers and saw a four-game win streak at home end. The Demon Deacons snapped a six-game skid against Virginia Tech and lead the all-time series 39-31.