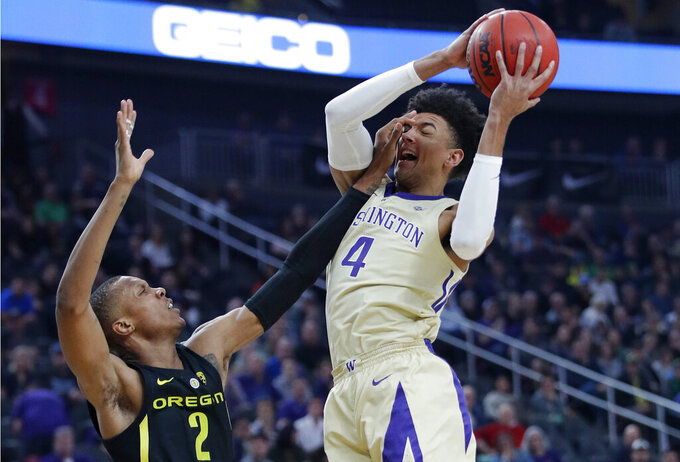 Washington's Matisse Thybulle attempts a shot over Oregon's Louis King during the first half of an NCAA college basketball game in the final of the Pac-12 men's tournament Saturday, March 16, 2019, in Las Vegas. (AP Photo/John Locher) 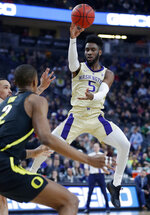 SEATTLE (AP) — Based on his history and experience in the NCAA Tournament as an assistant coach, Mike Hopkins knows the style of defense Washington plays will give the Huskies a chance of hanging around against seemingly any opponent.

He also knows that no matter what kind of chaos Washington's zone defense creates, the Huskies still must find a way to hit shots at a far more consistent rate than they did late in the season if they want their return to the tournament to last more than just one day.

Washington (26-8) is back in the NCAAs for the first time in eight years as a No. 9 seed. The Huskies will face No. 8 seed Utah State in the first round of the Midwest Region on Friday in Columbus, Ohio. The tournament berth follows a rapid two-year turnaround since Hopkins left his position as an assistant at Syracuse under Jim Boeheim.

But though excitement is accompanying their return, the Huskies are clearly not playing their best.

The Huskies have lost three of the past seven games, including a pair of losses to Oregon where Washington was held to season lows of 47 and 48 points. The second of those came in the Pac-12 tournament championship game Saturday in Las Vegas. Those two performances against the Ducks, coupled with other stretches where Washington's offense has been stagnant late in the season, have amplified concerns about whether the Huskies can score enough to pull off a tournament victory no matter how well they play at the defensive end.

Utah State is the type of opponent that will test Washington.

Utah State has won 10 straight, including the Mountain West tournament title game. The Aggies enter the NCAAs giving up 66.8 points per game, but it's two other areas where they could end up exposing Washington. Utah State is ninth in the country in field goal percentage defense, allowing opponents to make only 39.1 percent of their shots. The Aggies are sixth nationally in rebound margin, grabbing 8.9 rebounds more than their opponents per game.

During Utah State's winning streak, only Colorado State shot better than 43 percent against the Aggies and they've outrebounded opponents in 20 of the past 22 games.

"You can tell they're going to be very disciplined, not really going to be too rattled. ... Guys who are well-coached and care about their team success over their individual success, and those types of teams are dangerous," Washington guard David Crisp said.

The most impressive offensive effort came against USC in the Pac-12 tournament quarterfinals when the Huskies hit a season-high 13 3s. Two days later, the Huskies were 5 of 23 on 3s against Oregon, and Hopkins and Crisp both believe those offensive struggles impacted the effort on the defensive end for one of the few times this season.

Hopkins said one of the big messages going into the NCAAs with a group of players that has never been there will be the importance of staying locked in on defense.