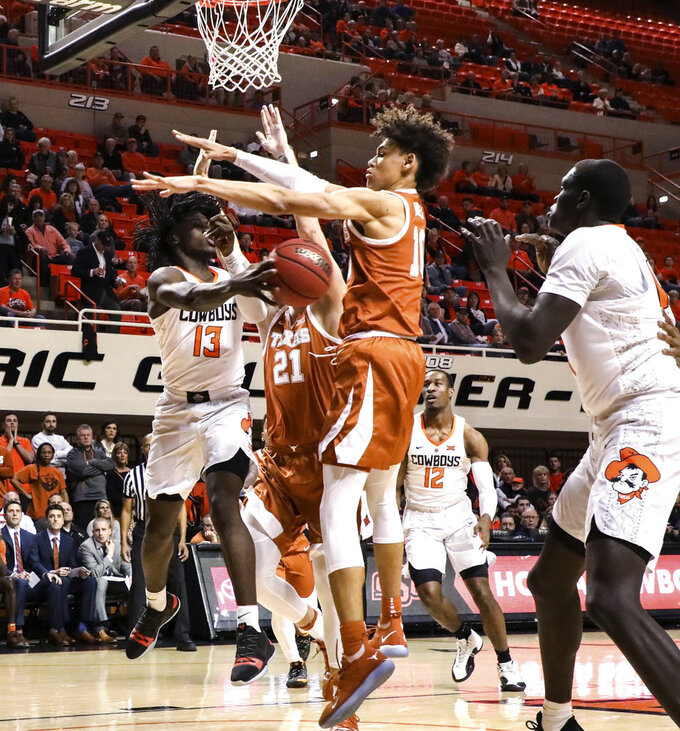 Oklahoma State's Isaac Likekele passes the ball to teammate Yor Anei during the first half of the team's NCAA college basketball game against Texas on Tuesday, Jan. 8, 2019, in Stillwater, Okla. (Evan Brown/Tulsa World via AP)

STILLWATER, Okla. (AP) — As desperate as Oklahoma State was to win a Big 12 Conference game, how the Cowboys looked doing it was of little concern to coach Mike Boynton.

Freshman Isaac Likekele hit two free throws with 10.6 seconds left and the Cowboys — who had blown most of what had been a 19-point lead — held on for a 61-58 win over Texas on Tuesday night. Lindy Waters III scored 19 points on 5-of-5 3-point shooting and grabbed nine rebounds as Oklahoma State (7-8, 1-2) avoided an 0-3 start in Big 12 play.

The Cowboys have won seven of their last eight games against Texas (10-5, 2-1) in Stillwater, a run that matches the Cowboys' home-court success in the series from 1925 to 1964, long before the schools became conference rivals.

"Winning is hard — that's what I think," Boynton said. "I'm extremely, extremely proud of our guys, even for having to win the way we did. Obviously, we played really well for the first half, probably as a good a first half as we've played all year . and then I thought our defense was still solid, but our offense just stagnated and got kind of tight against their press late. But you don't apologize for a win in this league."

Kerwin Roach II had 18 points to lead Texas, which missed its first 13 3-point attempts and finished 2 of 22 from behind the arc. The last of those misses, by Courtney Ramey, came at the buzzer as the Longhorns tried to tie the game.

Oklahoma State had held its first two Big 12 opponents — Iowa State and Oklahoma — to season-low shooting percentages, but the Cowboys also struggled offensively in both of those games. Those offensive issues surfaced in the second half, as the Cowboys had only two field goals in the final 12½ minutes, but they did just enough to hang on.

While Oklahoma State hit 6 of 11 3-point attempts in the first half, Texas missed all nine of its attempts from 3-point range and the result was predictable — a 39-22 halftime lead for the Cowboys.

Waters made all four of his 3-point attempts in the half, staking Oklahoma State to the lead. The fourth, at the 4:40 mark, put the Cowboys up 32-14 and their lead peaked at 19 at 39-20 after Waters hit two free throws with 1:06 left. Six seconds later, after Texas lost the ball on a turnover, most of the crowd at Gallagher-Iba Arena rose to its feet to applaud the Cowboys' effort.

"If our guys did take them lightly, that's really, really disappointing," Texas coach Shaka Smart said. "We talked about for three days how dangerous they are, how hungry they are and how hard they were going to play. We really emphasized the fact that we need to be the best version of us, regardless of who we're playing. Obviously, in the first half, we were nowhere near that.

"We dug ourselves a huge hole. We battled to make it a lot closer game, but you can't dig yourself a 17-point hole in conference play and expect to win."

Texas started the second half on an 8-2 run to cut its deficit to 41-39 and pulled within 48-41 on a twisting drive-and-basket by Roach with 8:31 left. As the Cowboys struggled against Texas' press and went almost seven minutes without a basket, Texas came within 53-47 on a 3-point play by Jaxson Hayes with 6:11 to go.

Waters broke Oklahoma State's long drought with his fifth 3-pointer with 5:47 left, but Texas kept coming and was within 57-54 after Roach made a pair of free throws with 1:28 to go. Likekele and Hayes traded baskets before Matt Coleman III's basket with 11.9 seconds left got Texas within 59-58.

Texas: Given an opportunity to start 3-0 in Big 12 play and remain atop the league standings, the Longhorns struggled to find open shots and were sloppy with the basketball in the first half and put themselves in a deep hole by committing nine turnovers against a team that thrives on its defense.

Oklahoma State: The Cowboys were in desperate need of a feel-good win and got it. After one more road game, they'll have a chance to build momentum with a five-game homestand.

Waters, a junior from Norman, became only the third Oklahoma State player to make as many as five 3-pointers in a game without a miss, joining Phil Forte (6 of 6 vs. Oklahoma on Jan. 27, 2014) and Desmond Mason (5 of 5 vs. Kansas on Feb. 2, 2000). Forte was one of the Big 12's greatest sharpshooters ever and Mason went on to a long NBA career.

The last of Waters' 3-pointers against Texas was well-contested and shot while he was off-balance, but it didn't seem to matter. Asked what the basket looked like, Waters grinned ever so slightly.

"It was huge," he said. "I could just throw it up there and it would drop in."

Asked why the Longhorns have been so inconsistent this season, Texas senior Dylan Ostekowski paused for a moment before answering.

"That's a good question," he said. "I think that's something that we're trying to figure out. We've got to figure that out soon — real soon. I think it starts with our mentality coming in. I don't know if guys want to own up to it or not, myself included, I think we were a little satisfied being 2-0 to start conference. We came in sluggish, not really respecting Oklahoma State like we should have.

"We've just got to come in with a mentality that whether the shots are falling (or not), that doesn't matter. Our identity is on the defensive end. I think we showed that in the second half, but we didn't show that whatsoever in the first half. That's why we've been inconsistent."

Texas: Home on Saturday against in-state rival Texas Tech before a game at No. 7 Kansas on Monday.

Oklahoma State: Visit West Virginia on Saturday before beginning the homestand on Monday against Baylor.