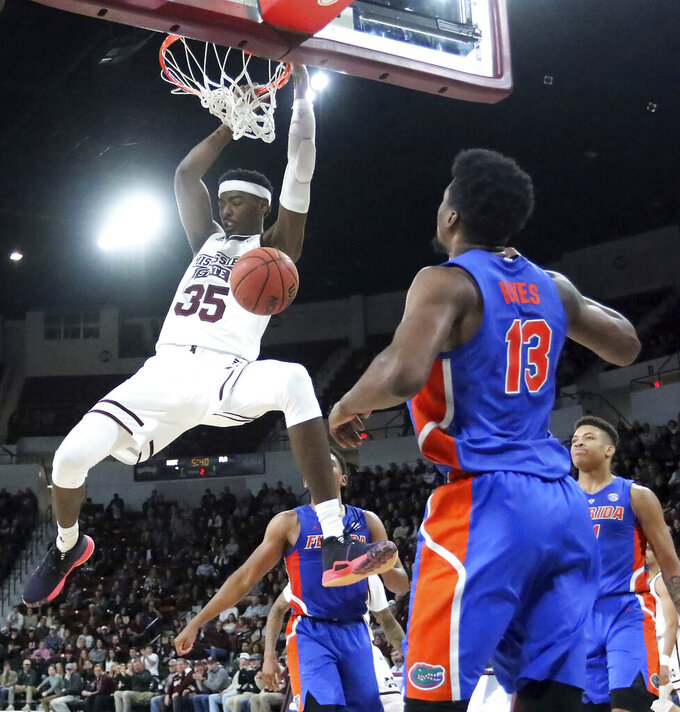 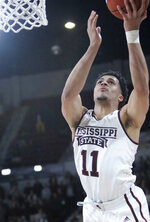 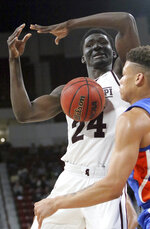 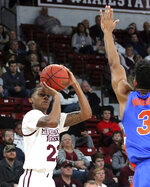 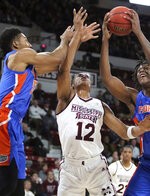 Weatherspoon converted a three-point play with 3.4 seconds left to lift the Bulldogs over Florida 71-68 on Tuesday night.

It was the sixth time in his career that Weatherspoon sank the winning shot. He drove the lane and was fouled by Kevarrius Hayes while dropping in the winning layup. Weatherspoon finished with nine points.

"We were supposed to get the ball in, and then me and Lamar (Peters) go back and forth with it," Weatherspoon said. "Lamar broke off the play and got out of the way, and that left me an open lane. I thought it went good, and it gets our confidence back to get back on the right track."

Peters scored all 16 of his points in the first half, and Tyson Carter added 12 for Mississippi State (13-3, 1-2 Southeastern Conference).

"That was obviously a huge win over a very good team that is very well-coached," Mississippi State coach Ben Howland said. "I was very proud of our guys, and I thought we kept our composure so much better in this game than we did last Saturday (against Ole Miss). And Q (Weatherspoon) just seems to have that rare, rare ability to make that play."

KeVaughn Allen had 17 points for Florida (9-7, 1-3), and Andrew Nembhard had 13 points. Noah Locke had 12 points for the Gators, who had won eight straight against Mississippi State.

"Our tempo press was effective for 39 and a half minutes," Florida coach Mike White said. "Q made a good play, and we didn't keep him in front. We rotated a little bit late and he finished and made a big play."

The Bulldogs led 36-34 at halftime and the teams played close throughout the second half. Allen's 3-pointer with 2:55 remaining put the Gators ahead 66-61, but Aric Holman answered with a 3 on the next possession, and Weatherspoon tied it at 66 with a layup with 1:27 left.

Holman and Locke exchanged baskets in the final 24 seconds before Weatherspoon won it with his three-point play.

Florida: The Gators have dropped three of their first four SEC games. The road doesn't get easier with a road trip to Georgia this weekend.

Mississippi State: After losing two closes games to open SEC play, the Bulldogs finally closed out a game thanks to Weatherspoon's heroics.

Florida travels to Georgia on Saturday.