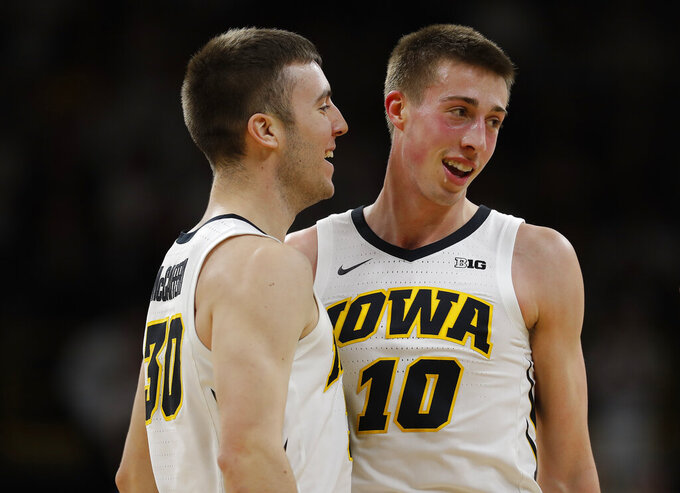 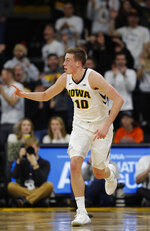 IOWA CITY, Iowa (AP) — Midway through the second half, an Iowa fan won a half-court challenge with a swish at the buzzer.

The Hawkeyes' hot shooting must have been contagious.

Freshman Joe Wieskamp matched a career high with 24 points and No. 23 Iowa shot 68 percent from the field in routing Illinois 95-71 on Sunday for its fifth straight victory.

"The only way you can explain it is to empower your guys to shoot it without hesitation," Iowa coach Fran McCaffery said.

Iowa shot 68.4 percent in the first half to jump ahead 39-24. Moss, Jordan Bohannon and Wieskamp then buried consecutive 3s to open the second half, and Moss capped that blistering run with a contested 3 near the Iowa bench to make it a 68-45 game.

Wieskamp and Moss combined to go 10 for 10 on 3s during that stretch.

"That's being taken out to the woodshed," Illinois coach Brad Underwood said.

Iowa nearly broke the school record for 3-point percentage in a game, set 21 years ago at 75 percent against Northwestern, but walk-on Austin Ash missed a 30-footer in garbage time. The Hawkeyes finished 15 of 21 (71.4 percent) beyond the arc.

Ayo Dosunmu scored 15 points for Illinois. The Illini forced 15 turnovers, but they also let the Hawkeyes get tons of easy looks on 3s.

That's "a team I wouldn't want to play in the postseason because of their inside-out mentality and their ability to score in transition," Underwood said.

Iowa: The Hawkeyes, who were languishing in the Big Ten cellar after starting 0-3, have a chance to make a major statement when sixth-ranked Michigan State visits on Thursday. Given how well Iowa has been playing lately, the Spartans should have cause for concern — even though they blasted Iowa 90-68 on Dec. 3. "We were never rattled," Hawkeyes junior Tyler Cook said of the team's hot streak. "Everybody else hit the panic button. But we knew what we were capable of."

Illinois: The Fighting Illini scored 95 points in a rout of Minnesota on Wednesday, only to go seven minutes without scoring a single point in the first half. Such is life for the young Illini, the only team in the Big Ten with underclassmen as their top three scorers.

Wieskamp, a highly touted recruit out of nearby Muscatine, finished 6 of 6 on 3s and 8 of 8 overall from the floor. He hit both of his free throws and added five assists, three rebounds and a steal with just one turnover. "He's never going to take a bad shot, and he's a really good shooter," McCaffery said. "Incredibly mature approach to this level."

Cook, who missed Wednesday's win at Penn State with a sprained ankle, finished with seven points and seven rebounds in 28 minutes. ... Trent Frazier was a ghastly 4 of 18 shooting for the Illini. ... Iowa had 29 assists on those 34 buckets. ... Illinois grabbed 17 offensive rebounds. Iowa had so many of its looks go down that they had just three.

"That kid is going to make a lot of money someday," Underwood on Wieskamp.

Beating Illinois won't do much for Iowa's ranking, but the Hawkeyes likely will move up a few spots because of losses by other teams at the back end of the poll.

Iowa hosts the Spartans on Thursday.

Illinois plays Wisconsin — fresh off a season-changing win over No. 2 Michigan — in Champaign on Wednesday.