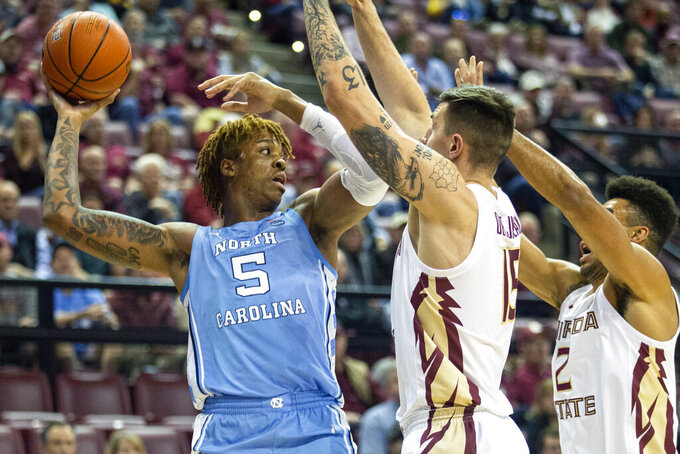 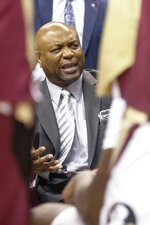 TALLAHASSEE, Fla. (AP) — While many eyes were on North Carolina freshman Cole Anthony, it was Florida State freshman Patrick Williams who had one of his best performances.

“He's a superior athlete,” Florida State coach Leonard Hamilton said of Williams. “He has the ability to go get rebounds in crowds. He has such fast-twitch muscles that he can spring up in an instant and get a nice, uncontested shot.”

RaiQuan Gray added 10 second-half points as the Seminoles (19-3, 9-2 Atlantic Coast Conference) moved within a win of their best-ever start in league play. Florida State opened 10-2 in ACC play in 2011-12.

“I think his club may be the best he's had since I've been back in the ACC,” North Carolina coach Roy Williams, who is in his 17th season with the Tar Heels, said of Hamilton. “They're hard to guard. They're athletic. And they do a great job defensively."

Florida State certainly made Anthony’s night a long one. The freshman guard started in his second game back from knee surgery for UNC (10-12, 3-8). Anthony, projected as a likely NBA lottery pick, scored 16 points on 5-of-22 shooting and added seven rebounds. He also shot 3 of 10 from 3-point range and 3 of 8 from the free-throw line.

Anthony struggled, but so did the rest of the Tar Heels. North Carolina clearly missed senior guard Brandon Robinson, who's averaging 13.1 points per game. He did not play because of a sprained ankle. Christian Keeling, who averages 4.4 points per game, made up some of the slack by scoring 14 points.

North Carolina went 0 for 17 during a long stretch of the second half and Florida State was able to build a comfortable lead. North Carolina shot 21 of 68 (30.9%) from the field.

“Didn't make shots, didn't make free throws,” Roy Williams said. “I'm just pissed off right now. I don't think about optimism, pessimism. We got to get to practice, try to work and see if we can get better."

The Tar Heels fouled to extend the game, but Florida State was 8 of 8 from the free-throw line in the final 2:15 — including Williams’ 4 of 4.

“We just stayed composed,” Patrick Williams said. “It was just a lot of plays down the stretch that sealed the game for us.”

Florida State slipped from No. 5 to No. 8 on Monday but has a good chance to climb a spot or two if the Seminoles can also pick up a win over Miami on Saturday.

Without Robinson, North Carolina leaned on Anthony. The Tar Heels shot 6 of 19 (31.6 %) from 3-point range and ran out of gas in the second half.

Florida State endured an off night from Devin Vassell, who had six points. The sophomore guard scored a career-high 27 points and was 7 for 7 from 3-point range in Saturday’s win at Virginia Tech.