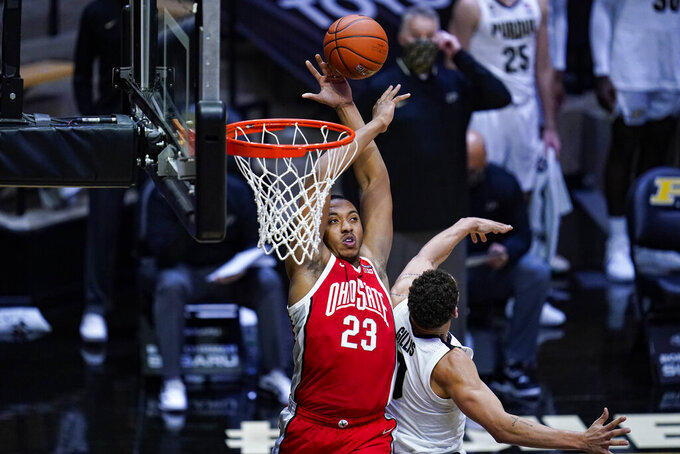 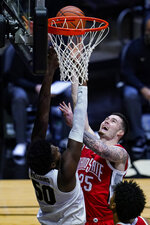 WEST LAFAYETTE, Ind. (AP) — Trevion Williams found a fix for his shooting struggles over the weekend.

A few days later, he was content to help his teammates score.

The junior forward had 16 points, nine rebounds and a career-high eight assists to lead Purdue past No. 20 Ohio State 67-60 on Wednesday night.

“I could care less about scoring,” Williams said. “Getting my teammates involved just makes me happy. I feel like I’ve always been a good passer.”

It was all by design.

Williams expected the Buckeyes (5-1, 0-1 Big Ten) to double-team him when he posted up, so the preseason all-conference selection started finding teammates as they charged down the lane — once flicking the ball behind his head for a nifty play that normally would have brought a sellout crowd to its feet.

Instead, with only a few dozen fans and many more cardboard cutouts inside Mackey Arena, players had to create the energy themselves and Williams did just that.

“Outstanding,” guard Eric Hunter Jr. said when asked to critique Williams’ passing skills. “I think he threw one like right over the back of his head and after that I said, ‘We’ll be fine.'”

Hunter played well, too, scoring a season-high 15 points as Purdue (5-2, 1-0) won for the fourth time in five games. It was Matt Painter’s 50th win over a ranked team in his 16 seasons as Boilermakers coach.

And after a rocky non-conference start, Purdue is at least off on the right foot in league play.

Justice Sueing led the Buckeyes with 14 points and Duane Washington Jr. had 13.

But behind Williams and Hunter, the Boilermakers were just good enough.

They finally broke it open midway through the second half by methodically extending the margin to 59-45 when Hunter made a 3-pointer with 8:36 to play.

“I don’t think we were as physical as we needed to be for this league, and I don’t think we played with enough poise in the last five minutes of the game when it was a two-possession game,” coach Chris Holtmann said. “We’ve got to take it, learn from it and move forward.”

Ohio State: Three of its first five wins were by margins of 10 points or fewer and at Purdue, the Buckeyes’ luck ran out. They shot 38% from the field and 25% from 3-point range while getting outrebounded 36-30 — never a winning formula.

Purdue: By bringing Williams off the bench, the Boilermakers seem to have found a spark. After his 30-point, 11-rebound game Saturday against Indiana State, Williams was impressive again Wednesday. If he keeps it up, Purdue could surprise some teams.

Ohio State played its second straight game without forward E.J. Liddell because of a non-COVID-19 related illness. Liddell came into the night leading the balanced Buckeyes in scoring (15.5 points) and rebounding (7.5).

“He’s a big piece of what they do,” Painter said.

Ohio State and Purdue finally got to square off — 279 days after their previous matchup was canceled.

They were supposed to meet on the second day of the Big Ten Tournament in March. But just minutes before the first game of the day was scheduled to tip, conference officials announced they had scrapped the entire tournament because of the COVID-19 outbreak.

“They’re always going to have those big, strong dudes,” Buckeyes forward Kyle Young said. “It’s going to be a physical game, we know that. And in a game like this we know rebounding is going to be critical so we were just attacking this game with a mindset of we knew it was going to be physical but we just weren’t able to be tough enough offensively and defensively.”

Ohio State: Faces No. 22 North Carolina on Saturday in Cleveland.

Purdue: Makes its annual trip to Indianapolis, this time to take on Notre Dame.