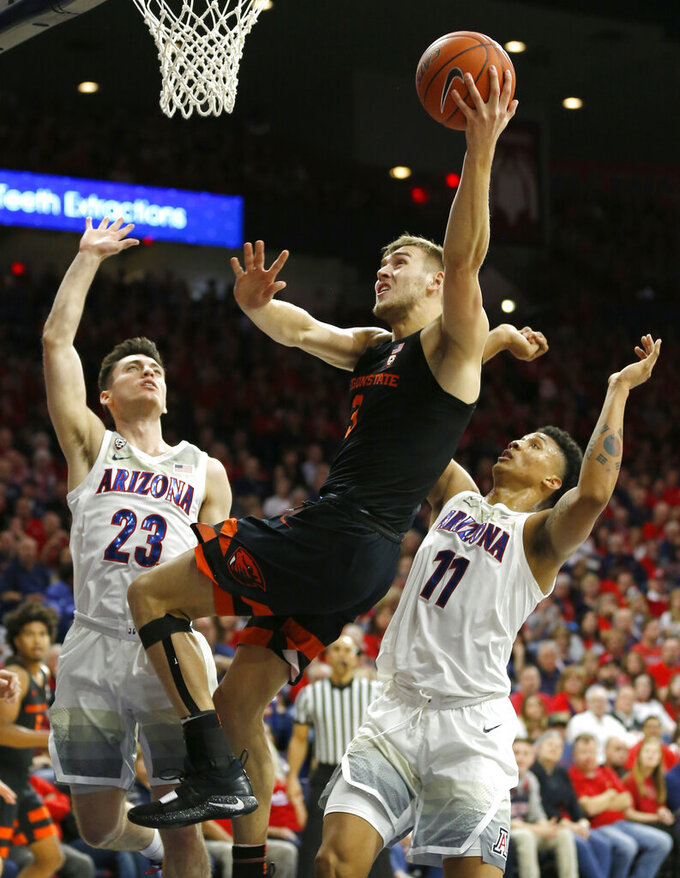 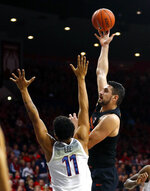 TUCSON, Ariz. (AP) — Arizona center Chase Jeter writhed in agony after landing square on his back before gingerly walking to the locker room.

Four minutes into the game, the Wildcats were without their lone big man, unsure how badly he was injured.

Arizona's players collectively picked up the slack by crashing the boards and draining 3-pointers, earning a solid victory on the heels of a disappointing loss.

Brandon Williams scored 20 points and the Wildcats dominated the offensive glass despite Jeter's scary fall in an 82-71 victory over Oregon State on Saturday night.

"We didn't know if he was going to return, but nothing really changed," said Arizona forward Ryan Luther, who finished with 16 points and 11 rebounds. "We collectively filled that void."

Following a lackluster loss to Oregon, Arizona (14-5, 5-1 Pac-12) jumped on the Beavers early and held them off by knocking down perimeter shots and grab offensive rebounds.

The Wildcats went 13 for 27 from the 3-point arc and snagged 21 offensive boards, leading to 28 second-chance points.

Justin Coleman led Arizona on offense and defense, finishing with 14 points, five assists, five steals and four rebounds. He made 5 of 10 shots and 3 of 6 from the arc.

"Our team needs a little bit of scoring punch from him," Arizona coach Sean Miller said. "Sometimes you can't always be the unselfish distributor on the perimeter. This year's team needs him to take the open 3."

Oregon State (11-6, 3-2) shot 51 percent and Tres Tinkle finished with 25 points, but couldn't keep the Wildcats off the glass. Ethan Thompson added 17 points for the Beavers, who were 4 for 17 from the 3-point arc.

Both teams were looking to bounce back after their first conference losses.

"They were driving us and we had to help, so you're not by your guy to box out," Oregon State coach Wayne Tinkle said. "So penetration No. 1 and we didn't play nearly physical enough."

The Wildcats had an awful offensive night in a 59-54 loss to Oregon on Thursday, Miller lamenting their shot selection and carelessness with the ball.

Oregon State had similar struggles in the first half against Arizona State while falling behind 18 before rallying late. The Beavers came up just short, losing 70-67 after Thompson's 3-point attempt was off the mark at the buzzer.

Arizona was sharp early against Oregon State, forcing five turnovers in the first four minutes while using a 16-2 run to go up 11.

The Wildcats had a scare when Jeter went down on his back and was unable to break his fall. He gingerly walked to the locker room after being tended to by Arizona's trainer and didn't return.

Once Oregon State cut down the turnovers, it was able to knock down some shots and get back in the game, only to see Arizona go on a late 12-4 run to lead 38-27 at halftime.

Jeter drew cheers from the McKale Center crowd when he returned for second-half warm-ups, but remained on the bench. Miller said he should be fine and able to play next week.

Arizona continued to snag offensive rebounds without him, stretching the lead to 53-41.

Oregon State made a push to cut Arizona's lead to three, but Coleman and Williams hit consecutive 3s to make it 71-60.

"Our guys battled their tails to get back in it, but several times we stepped out of who we need to be to allow them to answer," Tinkle said.

The Beavers didn't get much offensively from anyone outside of Tinkle and Thompson, and struggled to keep an average rebounding team off the glass to leave the desert with consecutive losses.

Arizona found its range from the 3-point arc after taking some questionable shots against Oregon and dominated the boards 41-29.

With Jeter out, Ryan Luther moved into the center spot. It was a smooth transition.

The 6-foot-9 senior forward made 6 of 12 shots and grabbed seven offensive rebounds in 30 minutes. Miller's one nitpick? He stepped out of bounds on left sideline — again.

Arizona plays at USC on Thursday.