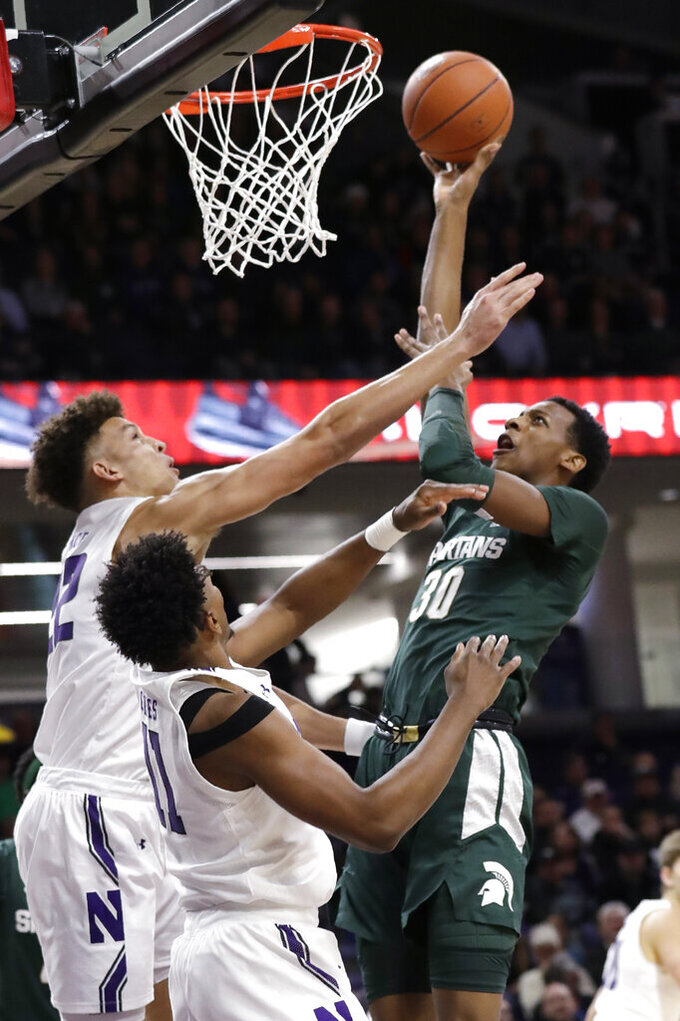 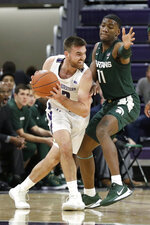 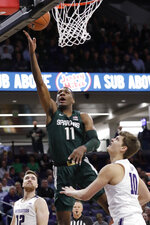 EVANSTON, Ill. (AP) — The turnovers were uncharacteristic for No. 15 Michigan State. The rebounding, well, that has been a staple for the Spartans for a very long time.

Cassius Winston scored 21 points and Xavier Tillman and Gabe Brown led a dominant effort on the glass, helping Michigan State hold off Northwestern for a 77-72 win on Wednesday night.

The Spartans (8-3, 2-0 Big Ten) turned it over 16 times, just one shy of their season high set during Saturday's 72-49 victory against Oakland. But Tillman and Brown each grabbed 10 boards, fueling a 48-24 rebounding advantage.

“Rebounding is important to us,” coach Tom Izzo said.

Winston went 8 for 16 from the field in the Spartans' 11th consecutive victory against the Wildcats. He also moved into 12th on the school's career scoring list with 1,601 points, passing Morris Peterson (1,588) and Raymar Morgan (1,597).

The senior guard bounced back nicely after he had just nine points on 3-for-13 shooting during the win against the Golden Grizzlies.

“Tonight we made some huge runs, we made some plays and then we let it slip away like that," Winston said. “We can’t do that if we want to be a really, really good team.”

Northwestern (5-5, 0-2) pulled within four twice in the final minute. But Foster Loyer made four free throws to help Michigan State hold on.

Boo Buie scored a career-high 26 points for Northwestern, and Pete Nance finished with 14 in his return from a one-game suspension for “failure to adhere to program standards.”

“That was just a mistake I made. We dealt with it, and I've moved on," Nance said of the punishment.

Buie's 3-pointer got Northwestern within five with 12:47 remaining. The freshman guard scored 11 points during the rally.

“The game could have gotten away from us I thought two or three times," coach Chris Collins said, “and I thought our guys just kept fighting, kind of hung in there."

Michigan State eventually regained control with a 7-0 spurt, and then held off the Wildcats in the final minutes. Tillman also made two foul shots to help close it out for the Spartans.

Buie's performance in the Wildcats' first game against a ranked opponent was a positive sign for one of the youngest teams in the country. He went 5 for 7 from beyond the arc.

“It felt good that I was able to make some shots down the stretch," Buie said, “and I had my teammates encouraging me the whole time."

Michigan State: The Spartans went 9 for 21 from 3-point range after they went 7 for 33 from the deep in the victory over the Golden Grizzlies. The 3-point shooting will be something to watch for Izzo's team as it heads into the heart of its Big Ten schedule.

Northwestern: The Wildcats dropped their season opener against Merrimack, and also lost to Radford on Nov. 19. So hanging in there with Michigan State into the final minute wasn't exactly a terrible result for the team. “I like where we're headed," Collins said. “I think we're getting better."