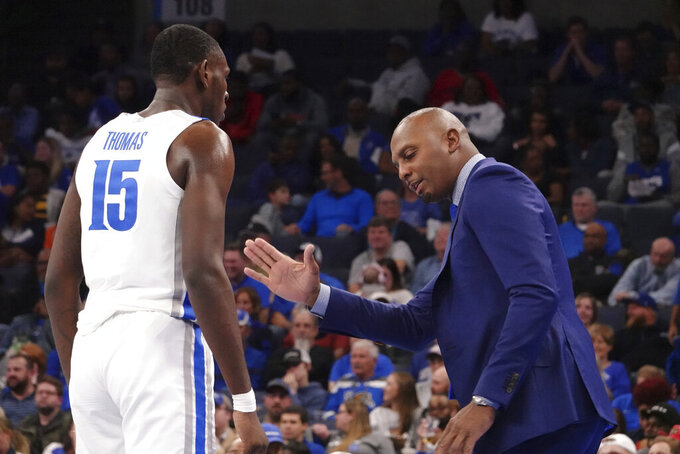 MEMPHIS, Tenn. (AP) — After missing the preseason exhibition games with annoying aches and pains, touted freshman James Wiseman finally made his debut for No. 14 Memphis.

It was worth the wait.

Wiseman, the nation's top-rated recruit, had 28 points and 11 rebounds as the Tigers beat South Carolina State 97-64 on Tuesday night.

The difference for Memphis with Wiseman in the game was obvious from the opening play when he scored inside. From that point on there were dunks, alley-oop finishes and offensive rebounds followed by putbacks.

"Just the first few plays, you saw it," Memphis coach Penny Hardaway said of Wiseman's impact. "It was amazing. Just him running the floor and throwing it towards the rim and then him finishing. That's such a huge luxury."

Fellow freshman Precious Achiuwa added 14 points and eight rebounds for Memphis (1-0). Wiseman connected on 11 of 14 from the field and blocked three shots before checking out for good midway through the second half.

"The main priority is trusting my teammates," Wiseman said of getting back into the flow of the game after injuries to his shoulder and ankle. "Just running the floor. That's one of my strengths. When I did that, the floor opened up tremendously."

Memphis controlled all aspects of the game, from rebounding to defense. By the early minutes of the second half the Tigers' lead had reached 21, and they continued to stretch the advantage while coasting the rest of the way.

In addition to outrebounding South Carolina State 42-25, the Tigers forced 18 turnovers that led to 24 points.

"Memphis is really good on capitalizing off turnovers," Bulldogs coach Murray Garvin said. "That's hard to compete with. Then, they also had 60 points in the paint.

"Wiseman is a heck of a basketball player. His best basketball is ahead of him, and we didn't have the size or athleticism to match up with the big fella."

South Carolina State: It's doubtful the Bulldogs will face as tough a challenge as they did in the season opener. No other teams on South Carolina State's schedule are in the Top 25. The Bulldogs, a member of the MEAC, are picked fifth in the conference preseason poll.

Memphis: The game was the perfect opening act for a Memphis team that has plenty of promise because of the highly touted recruiting class. Hardaway started five freshmen and the Tigers worked the opening set to Wiseman and kept feeding him.

South Carolina State was hardly a test for Memphis, so it's hard to imagine the win will affect the Tigers' No. 14 ranking. They have another game this week against the University of Illinois-Chicago before the next poll is released.

Memphis blocked 10 shots. In addition to three from Wiseman, DJ Jeffries, another freshman, had four. Lance Thomas had two and Achiuwa one.

"They have great size, great athleticism, and great skilled guys. It's a formula for success. . I think they are really, really underestimated. Being ranked 14th and having the No. 1 recruiting class, those guys should play with a chip on their shoulder for the rest of the year until they get that respect they probably deserve." — Garvin on Memphis.

Memphis: Hosts the University of Illinois-Chicago on Friday.