Witt a debut! Royals rookie stars in 3-1 win over Guardians 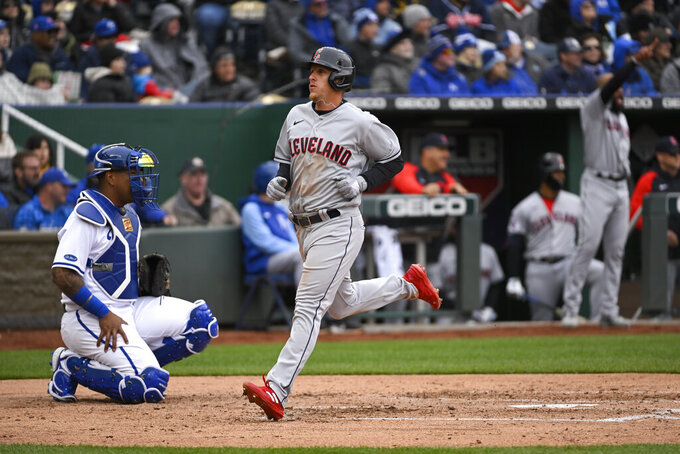 Cleveland Guardians' Myles Straw crosses home plate to give them a 1-0 lead against the Kansas City Royals on a double by teammate Jose Ramirez during the fourth inning of a baseball game, Thursday, April 7, 2022 in Kansas City, Mo. (AP Photo/Reed Hoffmann)

KANSAS CITY, Mo. (AP) — Bobby Witt Jr. searched the crowd for his family before his highly anticipated big league debut Thursday, finally spotting them in the sea of Kansas City Royals fans that had bundled up for a blustery opening day.

“I don't know if they were even paying attention to me,” Witt admitted later.

Everyone was paying attention to him by the end.

After going hitless in his first three at-bats, Witt roped a double down the left-field line with two outs in the eighth inning, spurring the Royals to a 3-1 victory over the rechristened Cleveland Guardians.

“You couldn't have scripted that any better,” Royals manager Mike Matheny said with a grin. “This isn't one he's going to forget, and I probably won't, either.”

In a matchup of former Cy Young Award winners, Cleveland ace Shane Bieber and erstwhile Royals star Zach Greinke dueled to a 1-all stalemate before turning the game over to the bullpens on a cold day at Kauffman Stadium.

It remained tied until the eighth, when the Royals' Michael Taylor worked a walk off Triston McKenzie (0-1) and then took second on Nicky Lopez's sacrifice bunt. McKenzie struck out Whit Merrifield before Witt, regarded by many as the No. 1 prospect in the game, doubled down the left-field line to give Kansas City its first lead.

“I could kind of see it coming a little bit with the way the game was going,” said Greinke, who signed a one-year deal to return to the club that drafted him 20 years ago. “It felt like it was going to be a special day.”

Andrew Benintendi drove in Witt, giving Royals reliever Scott Barlow (1-0) a cushion. And after a perfect eighth, Barlow struck out Myles Straw with runners on the corners in the ninth to end it.

Lopez also drove in a run for Kansas City, while Jose Ramirez had an RBI double for the Guardians a day after agreeing to a $124 million, five-year deal to stay with Cleveland through what could be the end of his career.

It was 47 degrees at first pitch, and a gale blowing out to right field made if seem even colder. Then there was the off-and-on drizzle that turned to shooting pellets of ice during the national anthem, which probably made everybody stuck wearing a jersey long for the sun and warmth of Arizona spring training.

“The weather was not fun for anybody,” Guardians manager Terry Francona said.

Greinke didn't seem to mind. He wore short sleeves for his first start in a Kansas City uniform since Sept. 30, 2010.

He didn't have the same dominant fastball that he had in 2009, when he won the Cy Young, but he made up for it with the wisdom of 18 years in the big leagues — and a beguiling 69 mph curveball. Greinke made it through 5 2/3 innings, allowing one run on five hits and a walk while striking out one, then got a standing ovation from the crowd.

“He just knows how to pitch,” Francona said.

Bieber, whose Cy Young came 11 years after Greinke won his, was nearly as good. He allowed one run on three hits in 4 2/3 innings for Cleveland, which played with a new name for the first time since 1915.

Both of the staff aces were gone by the time Witt came to bat in the eighth inning, though. They were reduced to fans just like everyone else, watching in rapt attention as one of the game's bright young stars stepped to the plate.

The Royals honored longtime scout Art Stewart, who spent 69 years in professional baseball, with members of his family throwing out first pitches to George Brett and Mike Sweeney. Stewart died in November at the age of 94.

The Guardians announced their $20 million, five-year contract with closer Emmanuel Clase, which was agreed to over the weekend. They have yet to announce their deal with Ramirez because several details are still being finalized.

The Guardians placed OF Josh Naylor on the injured list as he works his way back from a fractured leg. C Luke Maile (right hamstring strain) and right-hander James Karinchak (back strained) joined him there.