Woodson wants to lead Hoosiers basketball back to pinnacle 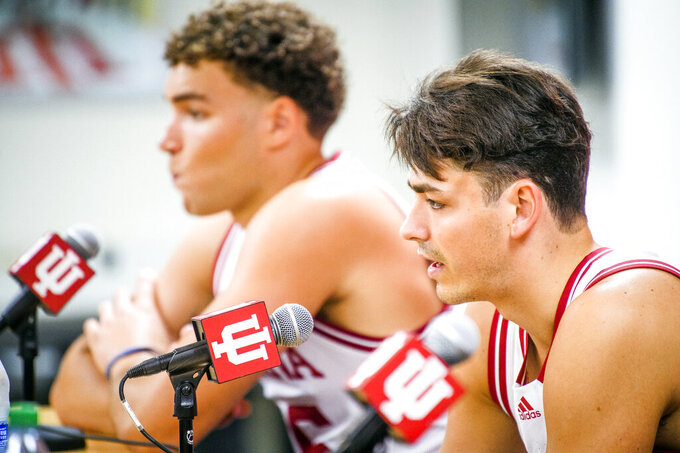 BLOOMINGTON, Ind. (AP) — Trayce Jackson-Davis made up his mind about Mike Woodson after one, 10-minute meeting.

He wanted to play for Indiana's new coach.

Race Thompson and two other players who thought about leaving the program needed a little more time before reaching the same conclusion. Now all four and a flurry of new teammates are on board with Woodson as they start writing a new chapter in Hoosiers history.

“He was perfect," Jackson-Davis said Monday at Indiana's media day. “The transition was so smooth. He came in and brought a positive vibe right from the get-go. I think people are excited, really excited and I don’t think I could say that in the past."

Clearly, things are changing as Indiana begins its first season under one of Bob Knight's prized pupils.

In June, roughly 150 former players showed up to the basketball team's reunion in French Lick, Indiana. Some wanted to mingle with Woodson; all came to hear The General speak.

The sights and sounds around John Mellencamp's small town, Bloomington, Indiana, are different, too. The famed candy-striped pants are fashionable again and there's a buzz about Indiana basketball that's been missing recently. Even Woodson senses the difference.

But the truth is, he never really left campus after graduating in 1980 with more than 2,000 points.

“You seem to think I’ve been away for 40 years. I've been here every year, you guys just didn’t know it," he said. “My walk around town has been great, man. People are excited, I’m excited. I came back for one reason and that’s to put this team back on top. I know there’s a lot of work to do.”

Hoosiers fans have heard those words from various voices for decades now, but since 1987 nobody has delivered. The closest they got to a sixth championship came in 2002 when Knight's successor, Mike Davis, took the surprising Hoosiers to the 2002 championship game. Maryland won 64-52, ending the most recent Hoosiers run beyond the Sweet 16.

Sure, the gruff-speaking, old-school 63-year-old Woodson may seem like an unlikely choice to lead Indiana back to the pinnacle of college basketball. After playing 11 NBA seasons and spending another quarter-century coaching NBA players, many wondered how he would fit with today's college athletes.

What Woodson has found, though, is players like his style.

“I was originally committed to Texas and ended up here so I feel like I’m here at the right time, being part of the first wave of players coach Woodson has at Indiana," freshman guard Tamar Bates said. “Coach Woodson just brings a positive vibe every single day and it makes us want to play harder for him. When we go out there, we’re playing to win."

It seems to be resonating with younger players everywhere as Woodson lands the kind of talented players Indiana has struggled to get in recent years.

Woodson then plucked three transfers out of the portal — 7-foot center Michael Durr from South Florida, 6-7 forward Miller Kopp from Northwestern and 6-3 point guard Xavier Johnson from Pittsburgh. All are expected to play key roles this season.

With three highly-rated recruits committed for next fall, Woodson's also been busy planning for the future.

While Woodson, like Knight, is a defense-first coach, high school and college players have developed an affinity for his NBA ties, a free-flowing offense and his ability to communicate.

“I came here to be pushed to be more than just a shooter to be challenged defensively and be a better rebounder," said Kopp, who hit 36% from 3-point range over the past three seasons. “Coach Woody and the staff want me to shoot the ball when I’m open, but they want me to improve at defending every possession and rebounding."

So after hearing Woodson's vision for Indiana basketball, these motivated Hoosiers were eager to get started.

“He really was being real with me," Thompson said, describing Woodson's sales pitch after he considered transferring. “He’s a real human, he’s a good guy. He was telling me who he is and I could tell he was real. I talked to my dad afterward and he said, ‘I don’t know how you could say no to coach Woodson.'"