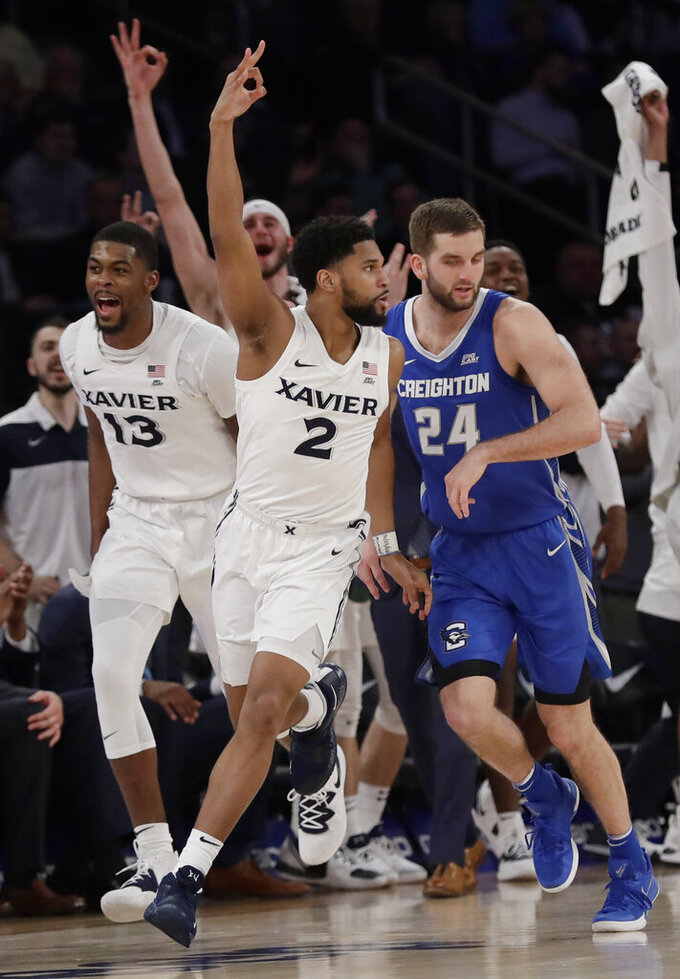 Xavier's Kyle Castlin (2) celebrates in front of Creighton's Mitch Ballock (24) after making a three-point basket during the second half of an NCAA college basketball game in the Big East men's tournament Thursday, March 14, 2019, in New York. (AP Photo/Frank Franklin II) 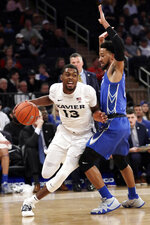 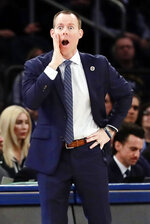 On Thursday, he was the best player on the floor for Xavier at Madison Square Garden, helping the Musketeers reach the Big East Tournament semifinals for a sixth straight season.

Hankins scored 22 points, including the go-ahead tip-in with 21 seconds left, and Kyle Castlin blocked Creighton's last shot in the closing seconds to give Xavier a 63-61 victory over the Bluejays.

The fourth-seeded Musketeers (18-14) will face top-seeded defending conference champion Villanova in the semifinals Friday night. Coming off a Big East regular-season championship and No. 1 seed in the NCAA Tournament last year, Xavier struggled to find continuity in its first season under coach Travis Steele. But the Musketeers have been playing as well as any team in the conference over the last month, winning seven of eight games to keep slim hopes of extending their streak of NCAA Tournament appearances to six.

Hankins and Castlin were part of Xavier's rebuild this year, both graduate transfers.

Hankins, who had no Division I offers out of Charlevoix, Michigan — population 2,513, according to the 2010 census — dominated at the D-II level last year. He has mostly been a complimentary player for Xavier. But when the Musketeers went cold in the second half against Creighton, Hankins took over. He scored 12 points in the last 7:11, starring on one of the biggest stages in basketball.

"It sunk in some on the court when they grabbed me for an interview with Steele on the court. I almost teared up some," Hankins said. "I got to take it all in and realize where I come from and what I just did."

After Ty-Shon Alexander's jumper tied it for fifth-seeded Creighton (18-14) at 61 with 51 seconds left, Hankins tapped in a third-chance shot for Xavier with his left hand to take a two-point lead.

"We didn't have an answer for him," Creighton coach Greg McDermott said. "His offensive rebounds, it seemed like everyone was a back-breaker."

Hankins had nine rebounds, five offensive, and was 11 for 15 from the field. The rest of the Musketeers went 15 for 45.

Creighton had the last shot, but McDermott said they play called wasn't executed properly and it left Alexander with a jumper that he was slow to release.

Castlin closed and got a hand on Alexander's 3 with four seconds left.

"He was wide open," Castlin, who transferred from Columbia. "I knew I just had to put it all on the line to try to seal the game."

Paul Scruggs grabbed the loose ball for Xavier, pumped his fist and the Musketeers moved on.

Alexander led the Bluejays with 21 points and Martin Krampelj added 14.

The game turned into a grind in the second half as Xavier went nine minutes without a field goal. Creighton whittled a 10-point lead to three and then stalled, too. Alexander gave the Bluejays their first lead of the second half, hitting a jumper while getting fouled and converting the 3-point play to make it 53-52 with 5:42 left.

Creighton: The Bluejays had a five-game winning streak snapped and probably saw their outside chance at an NCAA bid disappear. McDermott tried not to give up hope.

"''We played one of the better schedules, top-10 schedule, in the country, and if that's important, then we'll have a shot," he said.

Xavier: Leading scorer Naji Marshall (ankle) started after missing the regular-season finale. He finished with 11 points, just one in the second half, and eight rebounds.

Creighton: The Bluejays will likely land in the NIT.

Xavier: The Musketeers split two meetings with Villanova, with the home team winning each.

"We've just got to play as hard as we possibly can, leave it all out there, no regrets mentality, and be the attacking team," Steele said.