Zeigler, No. 13 Tennessee hold off No. 14 Arkansas 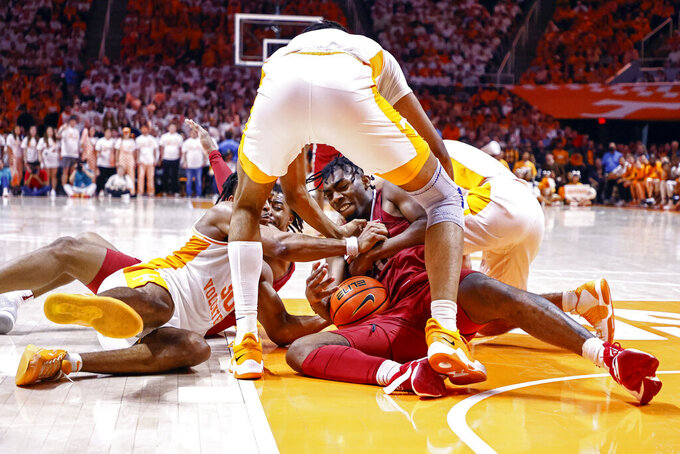 KNOXVILLE, Tenn. (AP) — The first half, No. 13 Tennessee looked totally prepared for the SEC Tournament and beyond. After that, things got more precarious.

Freshman guard Zakai Zeigler, whose family was left homeless by a fire in New York City last weekend, made two key free throws in the final seconds to help the Volunteers hold off No. 14 Arkansas 78-74 Saturday.

The Volunteers (23-7, 14-4 Southeastern Conference), who led by 24 points in the first half, wrapped up the No. 2 seed for the SEC tourney. Tennessee went the final 6:04 without a basket but still closed out a 16-0 mark at home this season.

“This league has been brutal,” Tennessee coach Rick Barnes said. “Every night you go out there’s a struggle. We can’t keep throwing lifelines out there.”

Zeigler finished with 13 points. His foul shot with 14 seconds left made it 77-74. After Arkansas’ JD Notae had an open 3-pointer rim out with 10 seconds to go, Zeigler made a free throw to clinch it.

Several members of Zeigler’s family lived in an apartment that was destroyed by the fire. The university did a GoFundMe project for the family and raised well over $350,000.

Zeigler got a loud ovation from the home crowd when he checked into the game for the first time and raised his arm to acknowledge the cheers.

Kennedy Chandler and Santiago Vescovi each scored 15 and Josiah-Jordan James added 12 for Tennessee.

“When you’re a man down, that’s hard to make up,” he said. “He would have helped today," Musselman said.

Trailing by 21 at halftime, Arkansas rallied and eventually got within double digits when Notae’s 3-pointer with about 4 minutes left made it 73-65.

With 56 seconds left, Notae made two more foul shots to get the Razorbacks within 74-72. Vescovi and Notae each made a pair of free throws to keep it close.

In the second half, Arkansas “became the more aggressive, physical team,” Barnes said. “They presented a lot of problems. We’ll learn from our mistakes.”

Barnes was very impressed with the way his team shot in the first half — 75%, in fact.

“Winning is hard,” he said. “But, when you shoot the ball like that, it gets a lot easier.”

Tennessee scored more points in the first half (50) than it did a couple weeks ago in a 58-48 loss at Arkansas. The Volunteers’ biggest lead was 44-20.

Arkansas: After starting 0-3 in the SEC, the Razorbacks were a longshot to be a contender. Now, with a double-bye in next week’s SEC Tournament already locked up, Arkansas has proven itself legitimate. ... Officials had three video reviews in the final two minutes of the game.

Arkansas and Tennessee will both play next in the quarterfinal round of the SEC Tournament in Tampa, Florida.