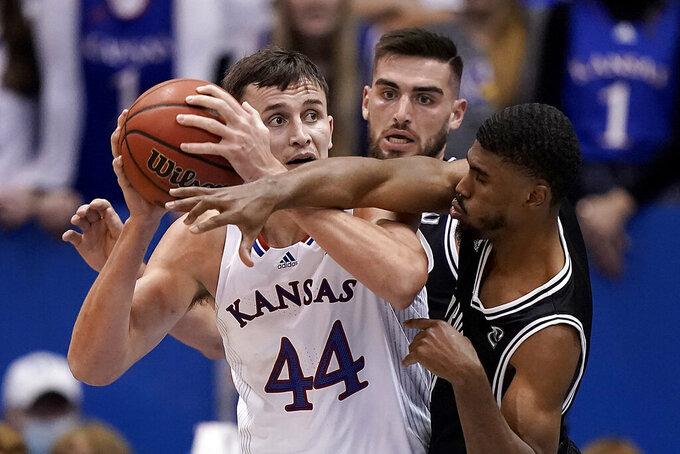 The only significant departure was Marcus Garrett, their floor leader and defensive stopper, and the Jayhawks responded by plumbing the transfer market for some speed, depth and athleticism that can help immediately.

There's point guard Remy Martin, the All-Pac-12 performer from Arizona State, who is expected to provide some scoring pop that's been missing from the position. Drake transfer Joseph Yesufu and Iowa State transfer Jalen Coleman-Lands will offer some depth and shooting ability, and Division II transfer Cam Martin can provide some help in the paint.

Now the question is how will all the pieces come together when it matters?

“It's a different thing, and the pressure is different,” Jayhawks coach Bill Self said. "You're struggling with me yelling at you now because of the pressure or whatever, wait until Tuesday. You run out there, you're in Madison Square Garden, you have some famous people sitting in the front row, the stakes are high and Michigan State is ultra-competitive.

“I don't know how we'll react,” Self said, “but our veteran guys should be fairly well accustomed to it.”

Indeed, the Jayhawks may look much different from the bunch that was run off the court inside Hinkle Fieldhouse by Southern California in the NCAA Tournament. But they still return four starters — though Jalen Wilson will be serving the first of a three-game suspension — and that includes sharp-shooter Ochai Agbaji and big man David McCormick.

That kind of experience is invaluable when it comes to marquee showdowns early in the season.

“We're making sure guys that might not have understood the gravity of the games we're getting to play,” senior backup Mitch Lightfoot said. “We're reminding guys that we're back to having packed houses, back to playing the biggest stages for the highest stakes. We'll be locked into the scouting report, locked into what they do and hopefully playing our best.”

How that looks is another tantalizing question heading into the opening game of Tuesday night's doubleheader.

The Jayhawks were a plodding team that struggled to create their own shot last season, and their dearth of athleticism was evident in the NCAA Tournament. But with Martin running the show, and the arrival of Yesufu and the other newcomers, the Jayhawks have the personnel to run a more up-tempo style this season.

Fans got a glimpse of it in an exhibition win over Emporia State; the Spartans will get the full dose Tuesday night.

“It was exciting just to see all the new guys find their roles,” Jayhawks junior Christian Braun said. “As you go throughout the year you'll find guys get more comfortable, but we're not there yet. We're just seeing what guys can do, trying to learn the plays and stuff. It's exciting for them. But just for me, it's about taking a bigger step.”

The steps don't get much bigger from Emporia State to Michigan State.

“There will be guys nervous for this game, more nervous than the first round of the NCAA Tournament, just because we don't have 35 games under our belt to get used to what's happening,” Self said. “This is totally new ground. We have eight newcomers out there. That's a lot of newcomers, and they haven't figured me out yet, and I'm just trying to get to where I know them. I anticipate there being some anxiousness, but that's also positive, too.”