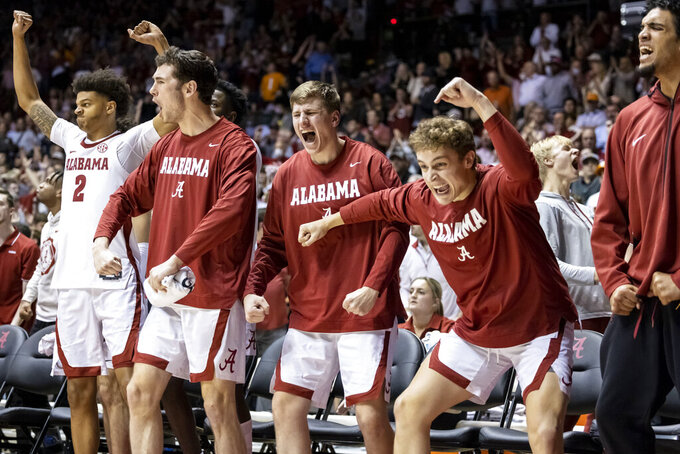 Alabama's bench cheers during the second half of the team's NCAA college basketball game against Tennessee, Wednesday, Dec. 29, 2021, in Tuscaloosa, Ala. (AP Photo/Vasha Hunt) 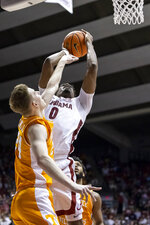 TUSCALOOSA, Ala. (AP) — Jahvon Quinerly scored 18 points and Noah Gurley added a season-high 15 to help No. 19 Alabama beat 14th-ranked Tennessee 73-68 on Wednesday night in the SEC opener for both teams.

Jaden Shackelford, Alabama’s leading scorer, struggled for most of the night before he made a 3-pointer and a layup in the final two minutes. The 3-pointer tied the game and the layup gave the Crimson Tide (10-3) the lead.

“I thought in the last six minutes we pulled away in rebounding,” Alabama coach Nate Oats said. “They’re a hard-playing group. I thought our guys showed a lot of resilience on both sides of the ball late in the game.”

Oliver Nkamhoua made a 3-pointer with 50 seconds left to give Tennessee a 68-67 advantage. Keon Ellis answered 10 seconds later with his own 3 and Alabama made three free throws in the final 25 seconds to seal the victory.

The Volunteers (9-3) were missing Kennedy Chandler and John Fulkerson, who tested positive for COVID-19. Chandler is Tennessee’s leading scorer. The freshman point guard is averaging 14 points and a team-leading 5.3 assists per game.

“We said, ‘Hey, this is what we have and we’re going to go play,’” Tennessee coach Rick Barnes said. “We believe in these guys, we recruited them. We said, ‘This is an opportunity for some of you guys to get more minutes.’”

Even without their two stars, Tennessee held the advantage for most of the first half, briefly pushing the lead to 10 before Alabama’s 10-0 run to end the half tied the game. It was highlighted by a 3-pointer from Shackelford, who finished with 12 points.

The Volunteers led for all but the first minute and final minute of the second half as they made 17 of 20 from the foul line.

Alabama’s pursuit of Gurley as a graduate transfer from Furman was in no small part due to his ability to score. He averaged 15.4 points per game in his final season as a Purple Paladin, scoring more than 20 in each of his final four games at Furman.

In his first 12 games at Alabama, he failed to score more than nine points, scoring five or fewer in five of those games. But he found his rhythm on Wednesday night.

“Hard work is not going to go unrewarded,” Oats said. “His effort was great, he took the right shots, controlled the ball when he needed to. I told him when you’re about the right stuff, you play hard, you lose yourself in the game and you step up to the free-throw line at the end of the game, it usually goes well for you.”

Tennessee had three double-digit scorers (Nkamhoua, Santiago Vescovi and Zakai Zeigler) and two starters with nine rebounds (Nkamhoua and Uros Plavsic). If Tennessee has to live without Chandler and Fulkerson beyond Wednesday’s game, it will have more tests like this one — it has games against No. 16 LSU and No. 18 Kentucky, both on the road, on Jan. 8 and Jan. 15.

Alabama’s next real test could come against No. 11 Auburn on Jan. 11.

Tennessee: Hosts Ole Miss on Wednesday, which will be the Rebels’ first SEC game after Florida was unable to play due to COVID-19.

Alabama: Scheduled for a game at Florida on Wednesday, but the Gators’ game against Ole Miss was postponed due to the Gators’ COVID-19 issues.