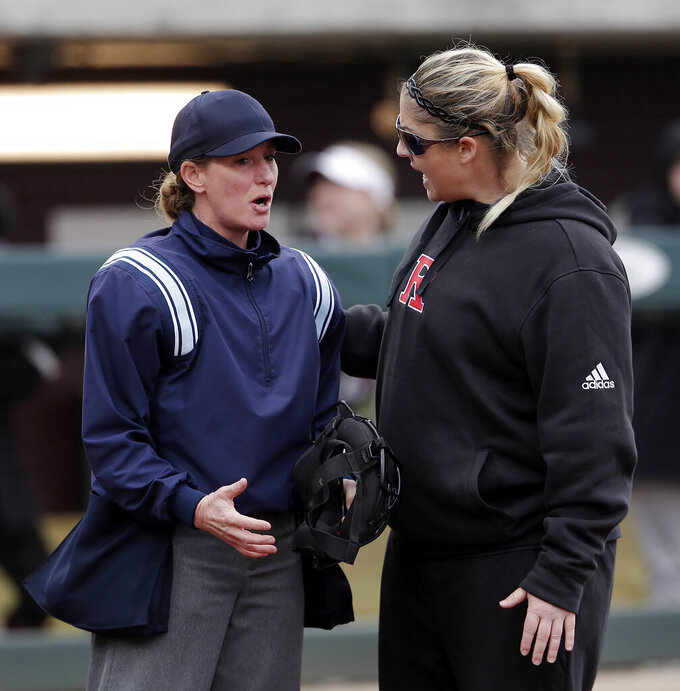 FILE - In this Feb. 16, 2019, file photo, Rutgers head coach Kristen Butler, right, argues a call with the home plate umpire during an NCAA softball game against Texas A&M in College Station, Texas. Rutgers coach Butler and her husband Marcus Smith, a volunteer assistant, have been accused of fostering a climate of fear, intimidation and abuse on the team. The university president said Thursday, Oct. 31, 2019, he wants an independent investigation of allegations. (AP Photo/ Michael Wyke, File)

Two Rutgers softball coaches, a husband and wife, have been accused of fostering a climate of fear, intimidation and abuse on the team.

The university president said Thursday he wants an independent investigation of allegations made against softball head coach Kristen Butler and her husband, Marcus Smith, a volunteer assistant. Smith has since left the program.

President Robert Barchi said in a statement that "nothing is more important than the health and safety of our students."

NJ Advance Media reported Butler, who was in her first season as head coach last year, denied all the allegations. The news organization was the first to report the story Wednesday.

Barchi also chided athletic director Patrick Hobbs for cursing at an NJ Advance Media reporter during a telephone interview about the report. Barchi added that Hobbs has apologized to the reporter directly. Hobbs acknowledged in a statement that he "reacted inappropriately."

The university president said the school "continuously" reviews its programs to ensure athletes are protected. He added he is confident the athletic department followed "appropriate procedures," but that "out of an abundance of caution I have nevertheless called for an outside investigation."

NJ Advance Media had provided Rutgers with written questions for Butler and Hobbs and gave the school 24 hours to respond.

Hobbs called one of the reporters working on the story and launched into a profanity-laced tirade. Hobbs sent the reporter a text message an hour later to "apologize for my words."

Barchi said he understood Hobbs' "frustration" at not being given time to "thoroughly respond to an expansive list of questions." Still, Barchi said, there is "never a time when such language is acceptable,"

The athletic director said in a statement the questions "centered on concerns that were raised from parents and a number of former players regarding some of the practice drills and team activities for the softball team following the recruitment of a top-flight Division I softball coach," Hobbs said.

Hobbs said the allegations were reviewed and action was taken. He added the university filed a report to the NCAA of a violation for allowing individual athletes to practice a total of two hours more than allowable over the course of two months.

Hobbs acknowledged his role as a "leader" at Rutgers and "someone who should serve as a role model to our young men and women.

"It was wrong for me to use the language that I did," Hobbs said in his statement. "I apologized to the reporter, but I owe an apology to the Rutgers community as well."

"It won't happen again," he added "The well-being of our student-athletes is always my first priority, and we will continue to be vigilant in addressing any concerns across all of our programs."

In its report about the abuse, NJ Advance Media said players claimed they lived in constant fear of being banished from the team or having their scholarships revoked despite NCAA regulations intended to protect against such retribution. The players claim they endured dangerous conditioning sessions that regularly left them in distress, while being subjected to wide-ranging physical and emotional abuse.

Rutgers has a history of problems with its coaches and athletic department.

The university fired Petra Martin, the women's swimming and diving coach, in November 2017 amid mental and verbal abuse allegations.

Martin has been accused of telling swimmers to lose weight, verbally berating them and ignoring mental health concerns. She said the allegations were not true.

Football coach Kyle Flood was fired after the 2015 season. It led to an NCAA investigation of the department of athletics and potential violations focused on Flood, a student-athlete host/hostess program and inconsistencies in the administration of drug testing procedures and policies.

The 18-month investigation found seven potential violations. Athletic director Julie Hermann was also fired in the wake of the controversy and replaced by Hobbs.

The incident led to the resignation of athletic director Tim Pernetti, as well as that of John Wolf, Rutgers' interim general counsel.

The basketball program also gained notoriety in 2001 when then-coach Kevin Bannon came under fire for an incident in a free throw drill during his first year (1997). Players Earl Johnson and Josh Sankes claimed they were forced to remove clothing for each free throw they missed, and then were forced to run wind sprints while naked. Bannon was fired in 2001.