South Carolina's Dawn Staley becomes force on, off the court 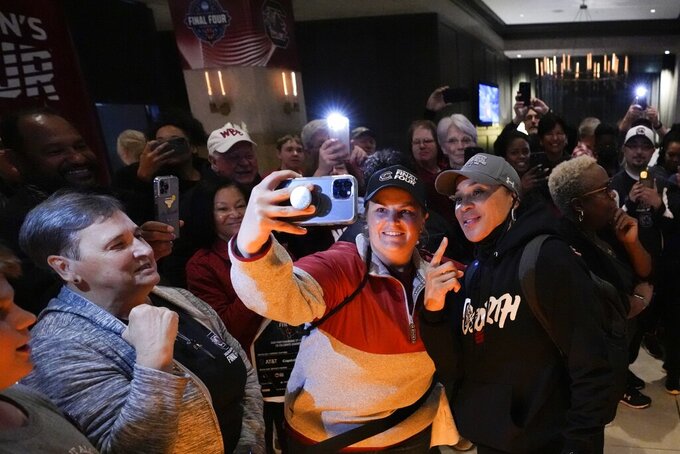 Dawn Staley swore over and over again during her playing days she would never become a coach. Everyone seemingly could see it in her future, everyone but her.

As an elite point guard during her playing career she was always coaching.

Now, 22 years later, she is the first Black coach to win two NCAA national championships. Other than Staley, there has only been five to ever win one in the history of men's and women's Division I basketball: John Thompson, Georgetown, 1984; Nolan Richardson, Arkansas, 1994; Tubby Smith, Kentucky, 1998; Carolyn Peck, Purdue, 1999; Kevin Ollie, UConn, 2014.

Staley's success also has given her the platform to champion issues off the court and she continues to speak out about gender equity, diversity and opportunities for women.

“I don’t seek it out,” Staley recently told The Associated Press. “If I get asked, I’m going to respond. Why? It’s the right thing to do.”

While Staley isn't looking for notoriety, basketball analyst Debbie Antonelli said she's an inspiration and everyone listens to what she has to say.

“It's a voice that is not just about South Carolina," said Antonelli, who will be inducted into the Women's Basketball Hall of Fame in June.

“Where you're a young coach, you talk about yourself and your team,” Antonelli continued. “When you're a veteran coach you become a servant to the game ... she has accepted that.”

Not that it came easily.

Staley repeatedly told late Temple athletic director Dave O'Brien she did not want the coaching job until changing her mind in 2000.

Then, after eight seasons with the Owls, Staley worried her move to South Carolina might be “career suicide” if she couldn't quickly make inroads against Southeastern Conference powers like Tennessee, Kentucky, LSU and Georgia.

It has turned out to be the best move she could have made.

In the past year, she guided the US national women's team to Olympic gold last summer, beat UConn 64-49 on Sunday in the NCAA title game and has a collection of coach of the year awards, including The Associated Press, Naismith and SEC. She is heading to Los Angeles with center Aliyah Boston for Friday's Wooden Award ceremonies.

There is no doubt Staley is at the top of her game; lawmakers in South Carolina honored the Gamecocks on Wednesday and next Wednesday they'll be the stars of a parade in downtown Columbia.

It all caps off a hectic a 12-month stretch during which Staley became a champion of the sport, and for it.

On the court, the Gamecocks made good on their yearlong goal of a national crown after falling to Stanford in the 2021 Final Four semis.

Staley barely had time to unpack before her duties as U.S. Olympic team coach kicked in with training camps, play at the AmeriCup to qualify for the FIBA World Cup in Australia this September — all before heading to Japan for the COVID-19 delayed Olympics.

She talked with the NBA's Portland Trail Blazers in June about their coaching vacancy, saying they treated her like “a real candidate” and not a token interview.

“When I got back, it was time to get going with them,” Staley told the AP preparing for her run to the tile in Minneapolis, nodding at her players during a team dinner.

Before tipping off the season, though, Staley received a seven-year contract from South Carolina worth $22.4 million. She made $2.9 million this season, one of the game's highest salaries.

It wasn't about the money, Staley said, “but it takes the money for this recognition to be eye-opening.”

Recognition that came with South Carolina starting the season No. 1 and never surrendering that ranking despite a pair of unexpected losses, including a 64-62 setback to Kentucky in the SEC Tournament championship game.

“We knew we had to keep our focus,” Staley said. “The big picture was still out there.”

South Carolina was never seriously challenged in its six NCAA Tournament games. The closest game was a 69-61 win over North Carolina in the Sweet 16 as Boston —the AP player of the year — scored all her team's 13 fourth-quarter points to hold back the Tar Heels.

Staley is often challenged to take on various issues off the court.

But Staley has blended her coaching success with her views on how best to grow the game. She said she had several Zoom calls with other prominent coaches including Stanford's Tara VanDerveer and UConn's Geno Auriemma during the offseason about how to keep growing the game.

“They were informative,” Staley said. “I mostly listened.”

She also listens to her players, connecting with high schoolers with an easy style. During a Final Four awards ceremony, all the Gamecock players had their heads down looking at their phones. Nearby, Staley was also tapping away at her phone.

Added 21-year old guard Zia Cooke, “She's like a mother figure at times and a best friend at other times."

Then there are times when she is an activist.

“She is not afraid to talk about what she feels is right, what she feels is wrong,” said Lobo, a teammate of Staley's on the gold-medal winning U.S. team at the 1996 Atlanta Olympics. “Even if it might be 100 percent her personality, she is sliding into that very naturally.”