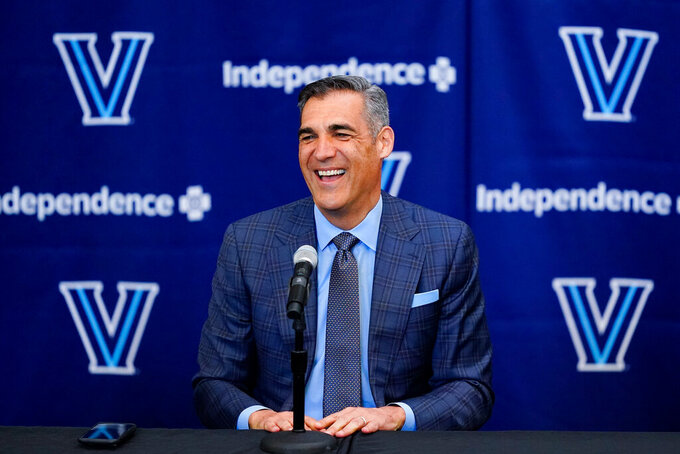 VILLANOVA, Pa. (AP) — Jay Wright attended mass — as one does working at the only Augustinian Catholic university in the nation — and often found himself on his smartphone more than he was listening to the sermon.

“I'm hearing the homily and I'm texting our players about something that could help them,” he said. “Which is crazy! But it's just the way you live.

“I look forward not to live that way.”

Wright walked out of the Pavilion - a dumpy gym that underwent a metamorphosis into a sleek home court where Villanova championship banners were raised under his watch — hand-in-hand with wife Patty, eager to test out his new life ahead. And maybe even sit through a few homilies without interruption.

Typically unflappable in the spotlight, Wright choked back tears Friday throughout his explanation for his sudden retirement at Villanova, saying he no longer had “the edge” he needed to continue coaching at a championship level.

His final season ended with a Big East Tournament title and a fourth career trip to the Final Four.

Not bad for a lost edge.

Dapper for most of his 21 seasons in a bespoke Italian suit, Wright returned to his GQ Jay style for Friday's farewell after he spent the last two seasons coaching in casual ware.

He could have used the handkerchief in his pocket.

The 60-year-old Wright insisted there were no health scares or future dalliances ahead with other programs or the NBA that contributed to his decision. Maybe broadcasting? He couldn't say for sure, only that he was ready to hit the beach.

Wright had contemplated retirement here and there over the last several seasons, but he knew down the stretch of this past one it was definitively his last. He told his inner circle at Villanova at the end of the regular season he was retiring. Villanova athletic director Mark Jackson and others hoped Wright would change his mind.

Wright went 520-197 in 21 seasons at the Big East program he led to two national championships and four Final Fours in a Hall of Fame career. Kyle Neptune, his longtime assistant who spent last season as head coach at Fordham, took over.

“My role now is just the standard-bearer for Villanova basketball,” the 37-year-old Neptune said. “My job now is make sure we keep this culture together. Make sure we hold this high standard of what Coach has created here.”

Neptune is the seventh Black head coach in the Big East.

Before Wright, Villanova was chiefly known for its plucky 1985 underdog championship team under coach Rollie Massimino. Wright was hired by Massimino to serve as an assistant at Villanova in 1987 and the two held the same jobs later at UNLV. When Wright was hired in 2001 to coach the Wildcats, he led them into the rarified air of elite college programs.

Villanova won its first national title under Wright in 2016 on Kris Jenkins’ buzzer-beater. It rolled over the NCAA Tournament field in 2018, winning every game by double digits on its way to the national title.

Wright calmly mouthed “bang” after Jenkins hit the winner while the Wildcats went wild around him.

But the cutthroat competitor that morphed into one of college basketball's best coaches started to dull this season. His players noticed. His assistants noticed. Once considered a hoops lifer and a coach who would rise as the conscience of the sport, he instead joined North Carolina’s Roy Williams and Duke’s Mike Krzyzewski as coaches with multiple championships to step down over the last two years.

“I started to feel like I didn't have the edge that I've always had," Wright said. “The edge always came natural to me. So I started evaluating. I would never have to think about anything. I started to think like, I have to get myself fired up here. Let's go. ... We couldn't ask the players, you've got to give 100% and I'm giving 70%. I just knew it was the right time.”

Villanova guard Caleb Daniels said the players were all shocked by Wright's decision — but clues had been sprinkled throughout another 30-win season.

“He wasn't as energetic," Daniels said. “(He would) get kind of like, tired over time. I still thought he had a little bit of fire in him.”

Wright will remain at Villanova and stay involved in fundraising and education, a consigliere of sorts. He was inducted into the Naismith Basketball Hall of Fame in 2021.

“I don't get any sense, and he didn't give me any promises about what the future holds, but based on the conversations we had and where he's at, he's ready for something different other than coaching,” Jackson said.

With Wright stepping down, Villanova turned to a trusted assistant who understood the standards for the program.

Neptune played at Lehigh, began as a video coordinator at Villanova in 2008 and worked his way into the head job at Fordham. He went 18-18 in his lone season — the program had 23 wins combined the previous three seasons. Villanova was vague on the number of actual candidates interviewed or seriously considered.

Wright rejected numerous NBA and other college overtures through the years and remained loyal to the Wildcats. He was an anomaly in the modern era — he won championships with juniors and seniors who graduated to the NBA; survived without a sniff of scandal.

“What we wanted to do was make sure that when this program moves forward, we do it from a position of strength,” he said.

Wright, a Churchville, Pennsylvania native, who played college basketball at Bucknell, led Hofstra to two NCAA Tournaments in seven seasons and finished with an overall head coaching record of 642-282.

And he insisted he's coached his last one.

“I've always felt like it's a run. And when you're on top of it and you're grinding and if you've got the edge in your head, you do it,” he said.

With seemingly so much more to give, Wright felt like that run had finally reached the finish line.