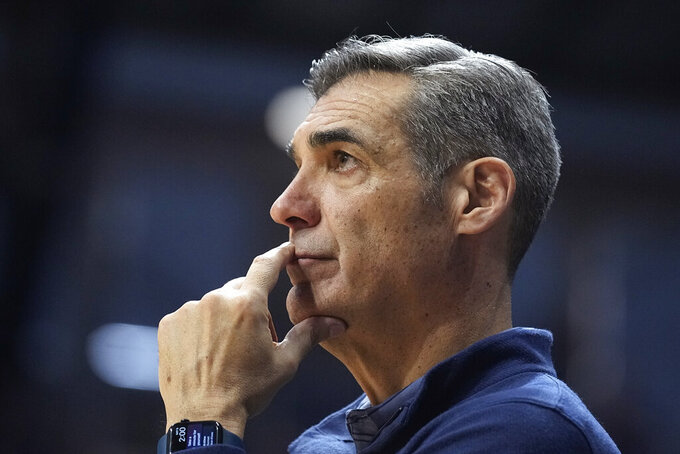 Villanova head coach Jay Wright watches from the bench during the second half of an NCAA college basketball game against Butler, Saturday, March 5, 2022, in Indianapolis. (AP Photo/Darron Cummings)

VILLANOVA, Pa. (AP) — Jay and Patty Wright held hands as they weaved their way around the Madison Square Garden court, trying —- if only for a second or two — to thank the crowd that stuck around after the Big East Tournament title game until ushers blocked anyone from approaching the couple.

For the students, the band, the coach flashed the “V” as he does after a victory. The former Villanova players get a quick wave or a hug. No one who wants a moment with the coach is left unrecognized amid the hoopla and Kool and The Gang blaring over the sound system.

“You go to the first round of the NCAA Tournament, it’s not like this,” Wright said about the New York championship scene. “And you’re not in this arena. And you’re not in New York City. This is a big jolt. This is big time. And we all know it and we feel it.”

Now with that party over, the trick is avoiding the comedown as the second-seeded Wildcats (26-7) head to Pittsburgh for the NCAA Tournament opener Friday against No. 15 Delaware.

“When you go through that experience at Madison Square Garden, and you’re in that excitement, and then you come down from that and people are hyping you up, you’ve got to get yourself refocused,” Wright said. “It concerns me. It’s something we’ve done before.”

Wright has been as masterful at avoiding the upsets in recent years in the NCAA Tournament as he is schmoozing donors and fans. He can refocus in a snap - with two national national titles since 2016 to show for it.

This time he'll attempt to do it against a neighbor; just 43 miles separate the schools. But the gap in budgets, talent and national prominence between the basketball programs is wider than their seeding: Villanova is 15-0 against the Blue Hens (22-12).

That doesn't mean Villanova is looking past Delaware.

Though the Wildcats are on roll, Wright’s program stopped being measured in Big East titles and tournament appearances years ago, at least since he won the first of two national championships in 2016 (2018, the other).

Wright preached caution with his Wildcats.

He noted the 2015 postseason when the Wildcats romped past Xavier in the conference tournament final, earned a No. 1 seed and thumped Lafayette, only to get upset by NC State in the second round.

And there was pressure that season: President Barack Obama had picked Villanova to reach the NCAA Tournament championship game. At that point, Villanova had not reached the second weekend under Wright since 2009′s Final Four run.

Take a look around the Pavilion or across the street at Villanova’s practice facility, and it’s clear the Wildcats have learned some lessons over that span. They have so much crystal under the glass it looks like Tiffany’s. There are two national championship banners in the rafters, and the common dominator through the buzzer-beating triumphs and breezy blowouts in the championship runs is the 60-year-old Wright.

“He’s a classy guy and a really good coach,” former UConn coach Jim Calhoun said at MSG. “Even though he thinks he looks like a movie star, he’s actually a real nerd. He’s a film guy. I was never a film guy.”

Wright's wardrobe might actually be the only real change through the seasons. Once known as the GQ Coach, Wright gave up suits as the pandemic turned sideline attire into a permanent casual Friday.

The clothes moved off-rack as Wright kept racking up milestones:

— The Wildcats have won a regular season or postseason conference championship in each of the nine seasons since the Big East reconfigured in 2013.

— His 516 victories at Villanova (638-231 overall at Villanova and Hofstra) are the most in the program and earned him an induction into the Naismith Basketball Hall of Fame. Duke’s Mike Krzyzewski is the only active coach with more national titles (5) than Wright

Krzyzewski is the NCAA career leader in wins. The coach at No. 2 is Philadelphia’s own Herb Magee, who retired this month with 1,144 victories over a career spent at Division II Thomas Jefferson. Also a Hall of Fame coach, the 80-year-old Magee said Wright stands among the all-time greats.

“I think one of the best coaches that ever coached is Jay Wright,” Magee said. “It’s his style of play and what he does to win games. It’s simple things like breaking pressure or applying pressure. Last-second stuff. He’s as organized and as good a basketball coach as anybody I’ve ever seen.”

Once a school that only produced the occasional player to the NBA, Wright’s tenure has included Mikal Bridges, Kyle Lowry, Jalen Brunson and Saddiq Bey.

“He’s just a great person that you want to be around, that you want to learn from,” said former Wildcat Kris Jenkins said. “That your parents want you obviously to be around. He really, really cares about every player and I think it’s easy to play for a coach when he feels that way about you.”

Wright and the Wildcats are looking to cut down more championship nets.

The brackets are out this week, and so, at Villanova, is a ladder. Just in case.