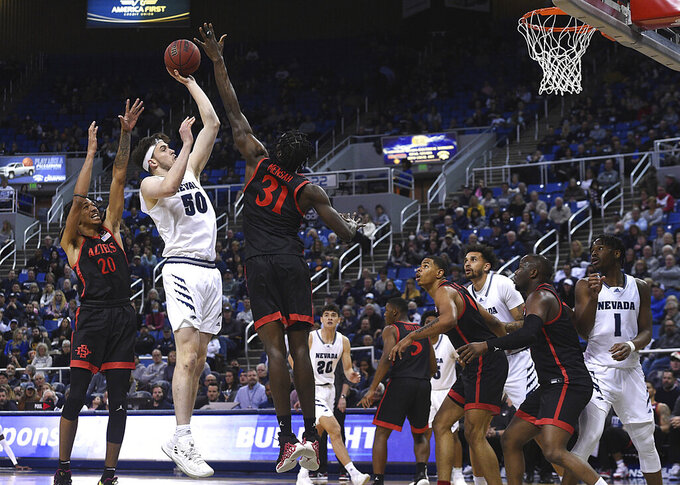 SAN DIEGO (AP) — Winning nine of their last 10 games, including three in six days, in three different states, has Brian Dutcher’s San Diego State Aztecs primed for what has become an annual run through the Mountain West Conference Tournament.

The Aztecs have reached the championship game all four seasons under Dutcher. They’ve gone 2-2, including winning last year’s title tilt against Utah State. Overall, they’ve played for the tournament title in seven of the last eight years and 11 times in 13 seasons.

They see no reason why they can’t make it to Saturday afternoon again this year, even though they enter as the No. 3 seed. Although they’re confident they’ve clinched a berth in the NCAA Tournament, the Aztecs do like playing for the chance to cut down the nets at Thomas & Mack Center in Las Vegas.

The defensive-minded Aztecs open play Thursday night against Fresno State, which beat San Jose State 69-67 in overtime in the first round.

“Obviously, we keep preaching that our best basketball is ahead of us and we still haven’t played it,” Dutcher said. “We have a level higher that we can go as a team. We have to believe in that. I think the kids do.”

Dutcher is confident the Aztecs’ closing stretch rounded out their resume enough to secure a spot in the NCAA field. Now they’re looking to solidify it.

“If you win three games in this tournament, they’re going to be quality wins,” Dutcher said. “From a seeding standpoint it would be nice to win it. This is one of the few years I feel as if we’re in the field going into the tournament. Our metrics are really high, we’ve played a really hard schedule, we’ve navigated it, so now hopefully we’re just playing for seeding.

“We want to hang a banner, we want to win the thing and get the highest possible seed we can going into the NCAA Tournament.”

The Aztecs are two years removed from going 30-2 and being in for position for a No. 1 or 2 seed before the NCAA Tournament was canceled due to the coronavirus pandemic. Their last game that season was a 59-56 loss in the MWC tournament championship game. The Aztecs returned to the NCAA Tournament last year after winning the MWC regular-season and tournament titles but were blown out in the first round by Syracuse.

Now they’re eager for the chance to play three games in three days.

“We just played three games this past week,” senior guard Matt Bradley said. “Although they weren’t back-to-back-back, sometimes those days in between don’t do much justice. It’s something we’ve been experiencing for the past month or two, playing games left and right. So going into the tournament, it takes us back to our high school days when we use to play AAU and you could play six games in one day. I think we’re really looking forward to this moment to just compete with each other for three days in a row and pull out all the wins.”